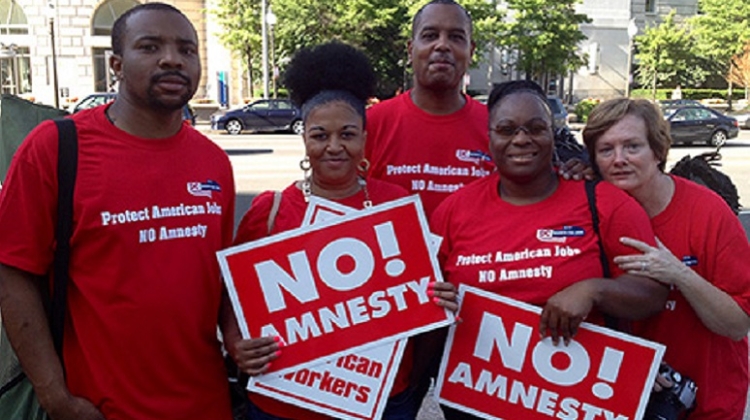 Twenty-one years ago, Dustin Inman, a sixteen year old boy, lost his life to a Mexican illegal alien. That alien is still a wanted fugitive. Under the Trump administration, the ICE VOICE office was established to help victims of illegal aliens and Dustin’s killer appear on its most wanted list. In one of his numerous acts of calculated cruelty, Biden shut down ICE VOICE.

And two decades later Dustin’s killer is still out there.

There are tragically a thousand cases like this. But some of them make people step up. That’s how D.A. King founded the Dustin Inman Society. The former Marine financed it with his life savings, borrowed against his house and sold his inheritance. Since then he has fought a tireless campaign in Georgia against an illegal alien crisis that only keeps getting worse.

And now he’s fighting one against the Southern Poverty Law Center.

A decade ago the Southern Poverty Law Center called him a “nativist”, but admitted the Dustin Inman Society wasn’t a hate group. “Because he is fighting, working on his legislation through the political process, that is not something we can quibble with, whether we like the law or not,” Heidi Beirich, the woman behind the SPLC’s infamous hate labeling, conceded.

Now, the SPLC lists the Dustin Inman Society and D.A. King as an “anti-immigrant hate group” because he favors enforcing the nation’s laws. King responded by suing the SPLC.

D.A. King’s adopted sister is Korean. The board of the Dustin Inman Society includes black and Hispanic, as well as immigrant, board members. The SPLC chose to disregard all of that by smearing the organization as a bigoted hate group anyway.

The complaint notes the past history of violent assaults triggered by SPLC hate group designations and hate map listings including the Family Resource Council terrorist attack. The complaint demonstrates the sloppiness that the SPLC is known for by listing a series of basic factual errors about the year when the Dustin Inman Society was incorporated, where King was employed and what year he got involved in activism against the illegal alien crisis.

“These admissions taken together show that Defendant SPLC not only fails to investigate or have expertise at all on groups it monitors but instead shows reckless disregard for the truth and does not appear to perform any fact finding at all,” the complaint charges.

The Southern Poverty Law Center either knew that the Dustin Inman Society “did not meet its own definition of ‘hate group’ and maliciously published the designation anyway or was so grossly incompetent and reckless as to be malicious in publishing the designation without doing any due dillegence as they repeatedly hold out to the public.”

The SPLC’s response essentially acknowledged that its hate group labels are a matter of opinion and cited a previous judicial ruling arguing that King had failed to allege facts “plausibly demonstrating, by clear and convincing evidence, that SPLC subjectively knew that its characterization of DIS was false.”

The Southern Poverty Law Center wants its smears to be treated as facts. And companies fire people, Big Tech monopolies deplatform organizations, including the David Horowitz Freedom Center, based on those smears. The SPLC provides training to law enforcement and politicians use its lists as a basis for government action. Guidestar, a non-profit information source, at one point added SPLC ‘flags’ on organizations that it had listed as hate groups. That goes beyond merely offering “opinions”. And yet when cornered, the SPLC’s lawyers counter that it’s just offering “constitutionally protected opinions” no different than any pundit.

The SPLC legal filing contends that, “nor does it matter whether SPLC keeps track of and publicizes how many organizations it has designated as hate groups. This does not somehow mean that any of the individual hate group designations themselves are factual.”

So much for what the Washington Post had described as ”a golden seal of disapproval, considered nonpartisan enough to be heeded by government agencies, police departments, corporations and journalists.”

Even mainstream media coverage at Politico and other outlets had reported on the SPLC’s casual disregard for the facts, baselessly putting entire towns on its “hate map”. Front Page Magazine has had its own brushes with the leftist hate group and knows how little in the way of anything factual is involved in the Southern Poverty Law Center’s listings.

At one point, the Southern Poverty Law Center had listed my single author blog as one of its “Active Anti-Muslim Hate Groups” alongside “Casa D’Ice Signs,” the signs on a bar located on K-Mart Plaza in Allegheny County, Pennsylvania. In one year it claimed that the “number of anti-Muslim hate groups increased almost three-fold” by counting Act for America as one group in one year and then counting all of its chapters separately the next year.

As sleazy and dishonest as you think the SPLC might be, it’s actually much worse.

There’s no question that the SPLC’s listings are comprehensive. They included, at one point, Ben Carson, Rand Paul, Ted Cruz’s father, and the African-American former Secretary of State of Ohio. The SPLC attacked former Homicide star Richard Belzer who was unhappy to be implicitly associated with Nazis. “As a Jewish person whose grandfather represented Israel at the United Nations before it was a state and an uncle, who as a member of the Resistance, fought the Nazis in World War Two, I am deeply hurt and offended,” he wrote.

Last year, the SPLC announced that it would stop monitoring black racial separatist groups because “black separatism was born out of valid anger against very real historical and systemic oppression” and the SPLC was adopting “an understanding of racism grounded in nuance and the realities of racial power dynamics.” What that meant was that black racism wasn’t racist.

Under these circumstances, it’s understandable that the SPLC isn’t even pretending that its smears have anything to do with the facts. At least not in a court of law. To its leftist donors, to law enforcement and corporations, the SPLC claims to be providing expert analysis and facts. But when sued over those same claims and the numerous sloppy errors that show no serious investigation ever took place, suddenly the SPLC’s opinion is no different than yours.

Except that it’s not.

A few years ago the House Democrat majority on the Ways and Means Committee presented a list of “hate groups” that it wanted to see lose their tax exempt status. The Democrat IRS hit list seemed to overlap with a list assembled by the SPLC and curated by Philanthropy Magazine. It included the David Horowitz Freedom Center, the American College of Pediatricians, the Center for Security Policy, the Family Research Council, and many others.

When government officials are using your list to target organizations, that’s not just an opinion.

D.A. King knows something about that. The Dustin Inman Society was never able to receive true non-profit status. Instead it’s been forced to operate as a 501(c)(4). Taking on the SPLC is another way of trying to even the score. Two decades later, illegal migration, like so many of the other crises that the organizations targeted the SPLC were created to fight, have grown worse. And so has the suppression of the political opposition. King has spent nearly a generation fighting an endless fight against open borders. And open borders is what the SPLC wants.

“With the full knowledge that we are a coalition made up of Americans of diverse descriptions – including proud immigrants – the SPLC has repeatedly spread false and libelous accusations that DIS is somehow an “anti-immigrant hate group,” D.A. King stated. “While we educate Georgians on the need for state legislation aimed at deterring the organized crime of illegal immigration in Georgia, the SPLC has worked against passage of such measures as anti-enforcement lobbyists in the Georgia Capitol.”

The SPLC’s Immigrant Justice Project claims that “Immigration and Customs Enforcement (ICE) officers have illegally and unfairly apprehended immigrants with disregard for their rights.” Even while the SPLC fights for illegal aliens, it also uses its false claims of expertise to denounce those who disagree and arranges to have them blacklisted and subjected to government action.

That’s not debate. Nor is it an opinion. It’s political repression.