Inside the twisted world of an 'interfaith' charlatan.

“I don’t expect anyone else, and I don’t expect myself, to believe in everything within a given religious tradition,” stated Rice University sociology professor Craig Considine during a September 18 podcast. This interfaith charlatan has once again made headlines with a new book, The Humanity of Muhammad: A Christian View, all the more reason to examine the superficial spiritual beliefs of this self-proclaimed “public intellectual” and “Islamic apologist.”

Fellow Jihad Watch contributor Stephen Kirby has recently exquisitely debunked this shoddy book’s “fantasy Islam,” but such intellectual outrages have long been par for Considine’s course. This author in particular has noted Considine’s past strained comparison of Islam’s prophet Muhammad with George Washington, which Considine’s new book reprises. He has also whitewashed Islamic jihad doctrine. Such a record only raises more curiosity about a man behind so many Muslim myths.

For a professional religious pontificator, Considine is consistently indifferent to religious doctrine. During numerous recent book interviews, he has stated that he “identifies as a Christian,” but “less so for big theological claims and more so for the kind of model that Jesus left” morally. Considine, whose “faith is deeply spiritual,” does not “think I am necessarily a conventional, mainstream Christian in a lot of ways,” but then God is “a lot bigger than my Christian tradition.”

Having grown up in an Irish/Italian-American family in the Boston, Massachusetts, suburb of Needham, Considine recalls how Catholic schools uninspiringly “indoctrinated” him. Thus he “veered away from my faith for years,” for his “teachers just never made it relevant.” He sees his experience reflected in growing contemporary atheism, for “people aren’t seeing religion as relevant anymore.”

Agnostic or even atheistic beliefs meant that Considine was “for many years…at least a lapsed Catholic, if not a non-Christian,” and an “à la carte Catholic in many ways” by the time Pope Francis began his papacy in 2013. In the recent months of his virtual book tour, he has confessed to be being a “bad Catholic,” given issues such as poor mass attendance, particularly under COVID-19 restrictions. In another September interview, he conceded more drastically that “I am probably un-churched permanently,” for “I take issue with the Catholic Church, some of their rules.”

Yet “I love the limbo state,” Considine ultimately concludes, analogous to a Venn diagram’s middle. This “space of overlap, it’s the space of confluence, of agreement, and of synthesis,” a “gray zone. It’s neither here nor there.” “It’s a space where identity categories get a little blurred” and “you can kind of be part of multiple communities at the same time.”

Limbo certainly defines Considine’s beliefs, such as his view that “I don’t believe that you need to be a believer in the Trinity to be a Christian.” With scant evidence, Considine claims that “Jesus was not always divine” for Christians. Meanwhile for him “Muhammad is a prophet, in my opinion, which is not held by a lot of Christians,” although Catholic dissident theologian “Hans Küng actually pushes the Catholic Church to recognize Muhammad as a prophet.”

Weighty theological questions such as Jesus’ divinity are secondary for Considine, whose “understanding of Islam is not very different from Christianity,” as Islam is part of the “monotheistic drive” in Judaism and Christianity. For him, Muhammad “is merely a continuation of these prophets” in the Bible, who “were delivering the same exact message,” a “monotheistic message.” Muhammad had argued that “I am really not coming with anything new. I am coming as the seal; I am coming as the person to remind everyone what all the prophets before me said.”

Therefore “Muhammad is part of a wider family” of prophets, Considine has stated. Accordingly he has tweeted and stated elsewhere that “Judaism, Christianity, & Islam are like three different branches on the same tree” and noted in another tweet supposed Christian/Muslim “mutual beliefs on Jesus.” Here he has similarly called upon Christians and Muslims to “focus on our similarities rather than our differences,” even though Christ’s end times “return” in Islamic theology hardly benefits Christianity. 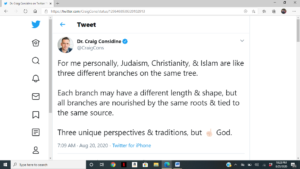 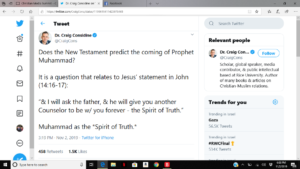 Considine has even gone so far as to promote in a tweet the specious Muslim claim that the “New Testament predict[s] the coming of Prophet Muhammad” in John 14:16-17. As Considine later stated, Jesus was “forecasting another kind of prophet to come along and he would be the spirit of truth, he would come to kind of reinvigorate my teachings.” Considine is “perfectly comfortable with identifying Muhammad as the spirit of the truth,” even though basic Christian doctrine holds that Jesus here meant the Holy Spirit. 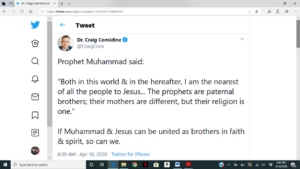 Considine likewise accepts other Islamic doctrines without question, as in his April 16 tweet that quotes a talking point of the Hamas-derived Council on American-Islamic Relations (CAIR). Here Muhammad declares that “in this world & the hereafter, I am the nearest of all people to Jesus” without any concern that Jesus himself might disagree. Considine’s December 4, 2019, tweet also cites without any skepticism Islamic canons about Christians who were “witness” to Muhammad’s prophecy. Considine has also asserted that the “Quran does a better job of speaking about Mary than the Bible does” without the slightest question about the Quran’s veracity. 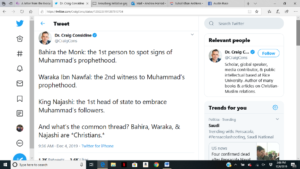 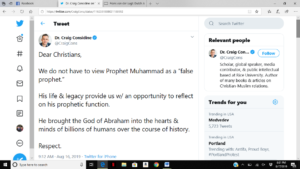 While Considine has claimed that “Islam really can’t exist without the history that came before it” in Judaism and Christianity, his interfaith fantasy ignores Islamic doctrine that Islam supersedes supposed Judeo-Christian corruptions. Like other superficial observers, he has “long been a proponent of extending the dash in Judeo-Christian to the Islamic, so Judeo-Christian-Islamic tradition.” “If you are going to use that term” of “Judeo-Christian,” he has stated, “you have to extend the tent even further” to Islam.

Only briefly and vaguely does Considine recognize the profound problems in his claims. “Muhammad is really quite close to Christianity in many ways, even though there is speculation and the argument that Muhammad actually kind of erases the idea of Christianity,” he has noted. Indeed, Islamic conquests have historically ravaged Christian societies, whose beliefs the Quran repeatedly condemns as blasphemy. These hard facts call into question Considine’s tweeted beliefs that Muhammad “brought the God of Abraham into the hearts & minds of billions of humans over the course of history.”

Not satisfied with accepting Muhammad as a prophet, Considine has even suggested that more prophets will come in the future. “I just can’t say that Muhammad would be the last prophet,” Considine has stated. “God is alive, God works in mysterious ways. I would not be able to say that God will not send another prophet.”

For the Woke, Considine might be a guru, but he clearly has no firm foundation for evaluating Islam. He simply cherry picks and twists fragments of Islamic teaching in order to construct an Islam in the image of modern multiculturalism. His wholly undeserved public prominence belies a complete lack of credibility, as future articles will elaborate.