Off to the Gulag for violating the Bolshevik One-Party Line.

Editors' note: Below is Frontpage Editor Jamie Glazov's explanation of his recent permanent suspension from Twitter:

The offending article they cited that I had posted was Pfizer Confirms COVID-Vaccinated People Can ‘Shed’ Spike Proteins And Harm The Unvaccinated – from vaccinesafety.info. The article is factual and backed up by verified and credible sources. Twitter gave me zero information on what exactly is misleading in the article.

This permanent suspension is a culmination of a long history of Twitter punishing me for violating their leftist One-Party line. Just recently, for instance, on Oct. 25, 2021, Twitter informed me that they had locked me out of my account because I had violated their “rules against hateful conduct.”

My “hateful conduct” involved me entering the discussion over Twitter suspending Rep. Jim Banks’ Twitter account because he had called Dr. Rachel Levine, the transgender Assistant Health and Human Services Secretary, a “man.”

I tweeted the story with an honest question that was on my mind: Does it matter if Rachel has a penis or not? I honestly thought -- and continue to think -- that this is a legitimate question in the context of Rep. Banks’ punishment.

I was subsequently informed that I had to delete the Tweet in order to get my account back. I decided to delete it – so that I could return and continue to ask many similar questions.

Another instance of Twitter punishing me transpired a few years back – when I was suspended for quoting the Qur’an and Hadith. This also apparently falls under what Twitter terms “hateful conduct.”

The mystery remains: how is quoting Islamic texts “hateful conduct”? If it is, why does Twitter never suspend Muslims’ accounts when their owners quote Islamic texts? Why does it only suspend people like me when I quote the texts, in this case, in defense of Muslim women and girls? I never did get an answer from Twitter on this issue.

In any case, since we are on this issue, I also remain confused why I was suspended from Facebook around that time when a certain Muslim individual I was having an exchange with about Islamic theology told me: “I will break your mouth.” When I posted a screen shot of that threat of physical violence I was suspended, while the individual who made the threat was not. 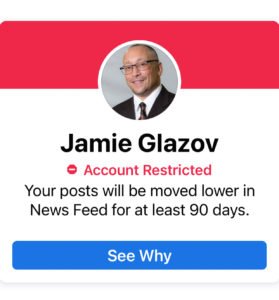 And make no mistake, YouTube is also constantly getting in on the fun: perpetually demonetizing our Glazov Gang program and deleting thousands of our views and subscribers. Recently it removed our shows with Celeste Solum about the PCR Test Horror, with Dr. Carrie Madeh about the Covid vaccine and with Jeff Crouere about Dr. Fauci — while failing to inform us of even one fact that we discussed that was wrong.

We are constantly suspended from posting at YouTube and they have threatened us that if we have one more “strike” (i.e. telling the truth about COVID, the vaccines, the mandates and the lockdowns), that they will remove our YouTube channel.

That’s why we have moved over to our new Rumble Channel. So please subscribe to it and hit instant notifications. Also kindly follow us on Parler: @Jamieglazov11 and GETTR: @jglazov.

And so the battle goes on.

Below make sure you’ve seen our recent episode featuring Vera Sharav, a Holocaust survivor who has been a lifelong advocate for human rights. She is the founder of Alliance for Human Research Protection .

We thank all of our supporters and all those standing up for free speech and liberty. God bless.