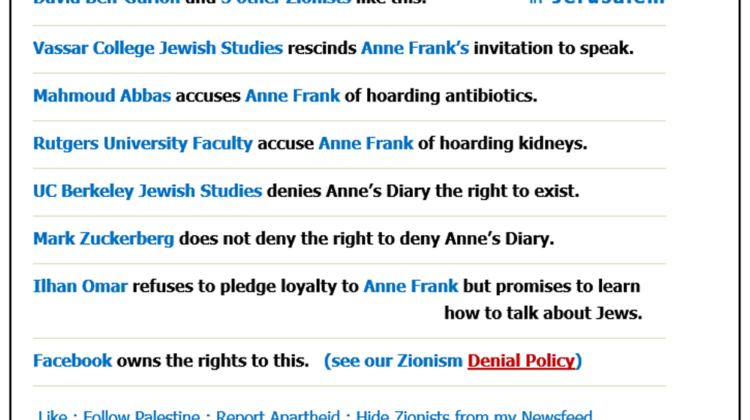 Imagine if Anne Frank had survived the war. I know, I know this is hardly an original premise and numerous writers and comedians have tackled this alternate history, perhaps most brilliantly by Shalom Auslander, whose novel Hope: A Tragedy, tracks the escapades of Solomon Kugel, a schlimazel of a Jew who discovers an elderly Anne Frank living in his attic in upstate New York.

But does that really sound like Anne? Living in an attic in New York for decades? For one, getting an American visa in 1945, even for survivors, was extremely difficult. Second, one would think that Anne had had her fill of attics by that point.

No, a far more realistic scenario would be Anne Frank having moved to Palestine with tens of thousands of other survivors. Perhaps she would have even joined the Irgun! Lord knows she would not have become a kibbutznik: way too much of the bourgeois German in her. No, a defiant Zionist would have been Anne’s game.

One must wonder how the Woke Jewish Scholar-Activists, who issue petition after petition condemning the Jewish state and its supporters while giving Palestinian terrorists a pass, would react to such an Anne Frank. Would she still be the iconic teenager meant to be relatable to all schoolchildren? Jewish leftists have been particularly callous toward refusenik gulag survivor Natan Sharansky. Why? Because the man imprisoned by the Soviet Union for yearning to be a Jew turned out to be a believer in a Jewish state. Who would have thought?

To be sure, Sharansky has reciprocated and developed a rather low opinion of these scholar-activists whom he recently dubbed “Un-Jews” because in attempting to liquidate Israel they are undoing Jewish peoplehood. An apt term if I have ever heard one. The Jewish Woke Inquisition came for Sharansky. One can only imagine what they would do to poor Anne had she survived Bergen-Belsen and made Aliyah.

It has been said (by me at least) that a Facebook snapshot is worth a thousand words.

So I offer below the mockup of my Zionist Anne Frank’s Facebook page and what would likely transpire once the Un-Jewish scholar-activists got wind of her commitment to Jewish peoplehood: 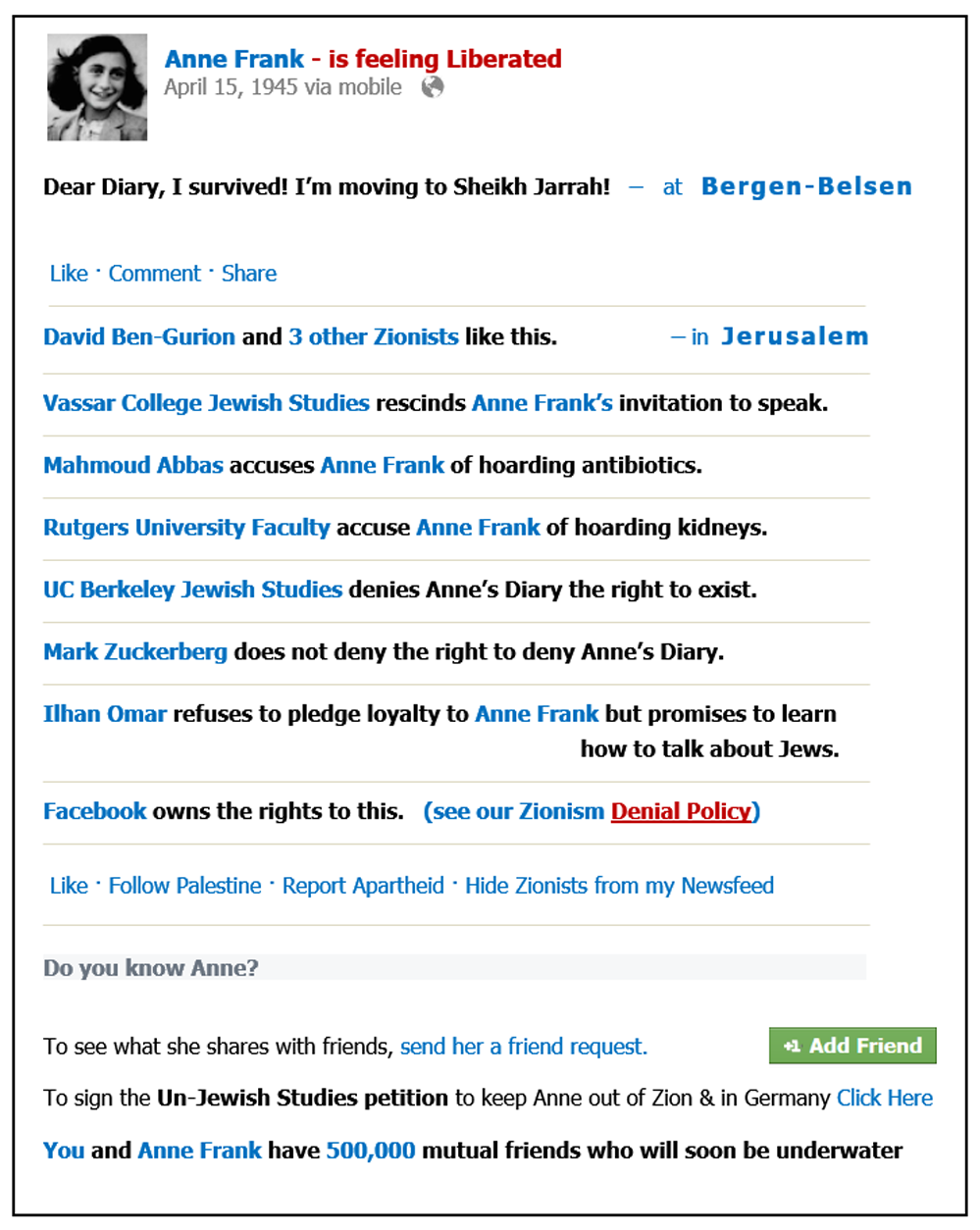 Statement and Petition on Zionism, Palestine, and Anne Frank

By The Scholars of Un-Jewish Studies

As scholars of Un-Jewish Studies, we the undersigned demand that His Majesty’s Government rescind the immigration visa of Anne Frank, a European Jew of possible Khazar descent, who is slated to travel from the settlement located at Bergen-Belsen, Germany to Sheikh Jarrah, where she has “purchased” property. Although Ms. Frank had a bit of a rough time during the war years, her desire to immigrate to Palestine is settler colonialism and a contribution to apartheid and ethnic cleansing. We ask that Ms. Frank be issued a refund and we are confident she can find suitable accommodations in the vicinity of her current location.

We also reject critics who are saying Ms. Frank’s situation is “complicated.” Calling this “complicated” is merely a strategy to legitimize Zionist colonialism and Jewish supremacy.

We are also calling for the boycott of Anne’s diary. It contains inappropriate sex jokes and she outted her Uncle Walter as a homosexual. This is but further confirmation that Palestine is a queer issue.

We can joke about this all we like. But behind every joke is truth. And behind every venerated Jew is a Torquemada waiting to launch an inquisition against the Jew for being the wrong kind of Jew. A free Palestine from the River to the Sea would have no place for a Zionist Anne Frank and her diary would be slated for cancellation. Such an Anne Frank, according to the Un-Jews, is the wrong kind of Jew.

Jarrod Tanny is associate professor and Charles and Hannah Block Distinguished Scholar in Jewish History at the University of North Carolina, Wilmington. He is the author of City of Rogues and Schnorrers: Russia’s Jews and the Myth of Old Odessa (Indiana University Press, 2011).