Bosch Fawstin is a cartoonist, creator of the anti-jihad superhero “Pigman,” and winner of the Mohammad Cartoon Contest.

Jihad marches on because we have yet to accept the truth of the threat.
As we all know by now, Elon Musk bought Twitter, and he’s promising to bring changes to how it does business, with a repeated focus on free speech and how
Islam is Islam.
Some thoughts on those who applaud Smith’s thuggery.
An issue that is urgently crucial to address – and to correct.
As I often put it, my cartoon speaks for itself, but let’s allow Mad Joe to also speak for himself, as that’s the best way to discredit him. Here are some of
My cartoon speaks for itself, but it’s worth noting that our current president used his political position to get millions of dollars from the Chinese
This is a cartoon I was commissioned to draw for Laura Loomer, and being someone who was banned by Twitter for life for criticizing Islam, as Laura has been,
If America were “systemically racist” against blacks, there could not be black racists on TV making millions of dollars while telling us how “systemically
Racist, anti-American leftist, Ta-Nehisi Coates, who “felt nothing” while watching the Twin Towers burn, and who writes a superhero whom he’s completely unfit
I was thinking about criminals like New York’s Cuomo and California’s Newsom, and how they now feel that they can do whatever the hell they want, to be as
Author’s note: This is the full transcript of a radio interview I did with the Danish outlet, DR, about the young reader’s Koran I did drawings for, which was
Obama never left Washington D.C. He’s been as politically active as he’s ever been, he’s just in the shadows most of the time now. At least when he’s not
Here’s the latest endorsement for Parler: “If somebody goes to Parler, they are saying, “I like crazy stuff.” -Bill Gates Bad enough that leftists
So how far will maskocrats go? Considering what we’ve seen and experienced this year, here’s my not so far-fetched take….
The disinformation media is trying to stop people from exposing their disinformation. But it’s no longer working the way it used to because there are now too
[Below is Bosch Fawstin’s introduction to his new book, “Peaceful Death Threats Vol. 2”. Order it at his store HERE.] Facebook just notified me that I’m
I suppose some people need this to be spelled out explicitly, about what really matters to “Black Lives Matter”. It’s not about blacks, it’s not about caring
Kamala Harris, on the eve of the election, released a short campaign video, not as a “dog whistle” to leftists, but as a bullhorn to them about how she’s a
I think my cartoon spells out my point, but let me accompany it with these words: Everything we’ve seen this past year, from the destructive lockdowns to
Editors’ note: The following is artist Bosch Fawstin’s introduction to his new book on Islamophiles, which he has titled Islam Bitches, “as they deserve no
I think my cartoon is pretty self-explanatory, but I’ll just add that all of the “reasons” that the Left gives for why it does what it does are lies,
On our Memorial Day, a day when Americans honor those who have died fighting for our freedoms, the leftist supremacists at the The New York Times decided to
Leftists keep saying, like a mantra, that “White Men Are Terrorists”. All white men? What about non-white men and women? This need to make evil things like 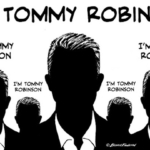 The way the UK government operates today makes me believe that the question it most asks itself is: Will this please or displease Muslims? A few examples
Next Page »