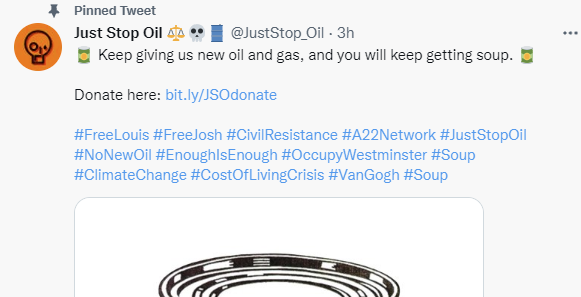 You probably saw video of this latest environmentalist terrorist stunt in the UK. A current eco-terrorist trend is to attack great or at least, in this case, famous works of art.

Just Stop Oil activists have thrown tomato soup over Van Gogh’s masterpiece Sunflowers at the National Gallery. A video shows the two women wearing Just Stop Oil T-shirts gluing one hand each to the wall below the painting, which is protected by a pane of glass.

YouTube won’t let you upload videos with views they disagree with, but an ecoterrorist group is allowed to maintain a dedicated channel promoting its latest outrages and recruiting members.

Just Stop Oil’s site uses numerous Big Tech services including those of Google and Facebook. It also fundraises openly through a site known as CrowdfunderUK. 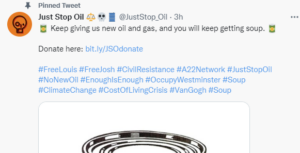 The link goes to the CrowdfunderUK site. I’ve reached out to the site and to its founder, Phil Geraghty, who also created ActionStorm, an activist site whose name speaks for itself, and who promotes radical leftist causes, about whether domestic terrorists can fundraise for criminal activity on its site. There has been no response.

CrowdfunderUK’s current partners include the Mayor of London and Santander Bank. I’ve reached out to both as well. Other partners include Marks and Spenser, the UK’s Calor gas company, ironic considering that the eco-terrorists want to get rid of gas so pensioners can freeze to death over the winter, and the Aviva insurance company.

In a time when PayPal is threatening $2,500 fines for political dissent, Big Tech companies routinely collude to deplatform and silence conservative critics, leftist terrorism is protected by a public-private partnership of government authorities who favor them and refuse to enforce the laws, and by Big Tech companies who enable and protect them through selective and biased enforcement of their own regulations. Leftist tyranny and terrorism go together.

UPDATE: The eco-terrorist group is now saying that their account is down. They’re fundraising for payments through Stripe, via Visa/MasterCard, Discover, and American Express.

The site also states that, “You can make a tax deductible donation to Just Stop Oil’s recruitment, training and educational programs through the Climate Emergency Fund.”