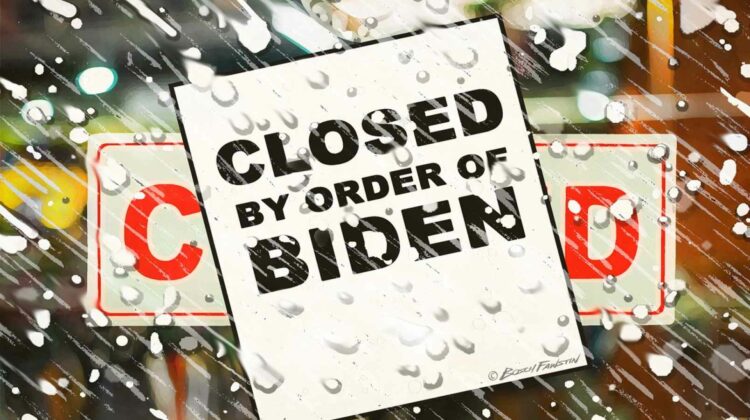 As the economy melts down, Biden is promising that there will be no more lockdowns.

Biden claims that his plan to beat the pandemic “doesn’t include shutdowns or lockdowns”.

That’s coming from the hack who lied about graduating in the top half of his class in law school, who lied that his house burned down with his wife in it, and lied that he had served as an envoy to Israel during the Six Day War when he was still a law school student plagiarizing papers.

“No, I don’t think it should be mandatory. I wouldn’t demand it be mandatory,” he insisted.

The lesson here is not to believe anything that Biden says in December or any other month of the year.

Biden’s official plan may not include shutdowns and lockdowns, but that’s exactly what the vaccine mandate he promised not to illegally inflict on the country is set to do.

The most common trigger for lockdowns is ICU capacity. When the amount of available beds in ICUs drop below a certain number, the lockdown button gets pushed. Democrat governors have conveniently shown little interest in expanding ICU capacity and there are even fewer nurses available than last winter due to the economic instability first caused by the suspension of “elective procedures” and then by the vaccine mandates imposed by Biden and the Democrats.

When hospitals get slammed by the seasonal surge, it will take even less to hit ICU capacity.

Paradoxically, one of the arguments for the mandate was that the Delta variant had “exacerbated health care staffing shortages. For example, 1 in 5 hospitals report that they are currently experiencing a critical staffing shortage.” That’s nothing compared to the shortages created by Biden’s vaccine mandate and local state and city Democrat mandates.

Hospitals, especially in states like New York with their own vaccine mandates for health workers, are already shorthanded because they were forced to fire unvaccinated workers.

Nursing shortages, already critical, have gotten much worse with New York and some other states turning to the National Guard.

In Kentucky, Governor Andy Beshear admitted that there was a 20% shortage of nurses.

Back in August, Beshear had appeared at an event with top hospital administrators urging companies to impose a vaccine mandate… especially in hospitals.

California is looking at its own shortage of over 40,000 nurses. Michigan hospitals are eliminating hundreds of beds due to nursing shortages and trying to import foreign nurses. In one Pennsylvania health care system, 35% of nursing slots have gone unfilled.

Democrat states have responded to the crisis by trying to become competitive, luring nurses from other states, creating even more vacancies and instability in hospital staffing.

They’ve done everything to find more nurses except relaxing their own vaccine mandates.

And the storm is coming.

Even without the pandemic, flu season and assorted accidents and medical problems that are more likely to crop up over winter would see large spikes in hospital admissions.

Biden’s vaccine mandate and the various local state vaccine mandates have dramatically worsened the nursing shortage and ICU capacity triggers will be hit before too long. And once that happens, state governments will have a choice between shutdowns and ignoring their rules.

Since the one consistent factor of pandemic governance has been the double standards, expect Dem governors who are already facing a huge political backlash to try and stop the shutdowns.

Or at least some of them will.

But a whole bunch of places have handed over authority to public health administrators, bureaucrats with all of Fauci’s arrogance but no actual medical training, who will be almost certain to follow the rules they created and perpetuate their power grabs for one more year.

And that will leave Democrat legislatures and executives with a choice between taking away their authority or going back to blaming the lockdowns on those who “don’t follow the rules”.

Why would it? Most Dems don’t want another term of Biden and Kamala. To say nothing of how the rest of the country feels about them. And the federal bureaucrats who wrecked the economy are even more unaccountable than a one-term corrupt gerontrocrat and his current doxie.

Biden claims that his plan “doesn’t include shutdowns or lockdowns”, and yet it all but guarantees them. But once the issue comes up, the facts will be spun and smoke will be blown. The media will confuse the issue and blame everything except the root cause of the disaster.

But the truth about the coming crisis is really simple.

Biden’s vaccine mandate and other Democrat mandates have worsened the staffing crisis at hospitals and health care networks. When they get slammed over the winter, the number of available beds will be even lower and it will take fewer patients to hit ICU capacity triggers.

When public health administrators call for lockdowns and shutdowns, and Dem governors start contemplating new onerous restrictions on restaurants and small businesses, the origin of the latest lockdowns will lie with Biden’s decision to impose vaccine mandates on America.

Something that he promised last December that he would not do.

The story of the pandemic has been one of avoidable crises that became inevitable only through a combination of corruption and incompetence. Every step of the disaster was foreseeable and the coming push for winter lockdowns and shutdowns is no different.

Fire a whole bunch of nurses and there will be less hospital capacity. Biden claims that he doesn’t want any more lockdowns, but he’s doing everything possible to lock down America.