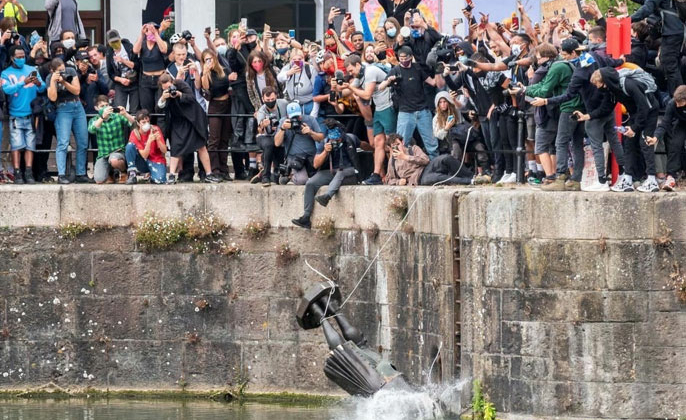 Can you spot the difference in the image above?

I suspect you can.

I also suspect you will be able to guess the story behind these two “statues” before I even begin with the detail. But do not despair: this is a story with a sting in its tail. It is a story of a massive own goal by Black Lives Matter.

The fine gentleman on the left is Edward Colston. Born in 1636 to family of shipping merchants, he followed his father into the shipping business and went on to become one of the most celebrated philanthropists of his time, changing the lives of the very poorest in his home city of Bristol and elsewhere. He endowed schools, funded hospitals, gave money for almshouses and paid for churches to be built.

The “lady” on the right is a Black Lives Matter protestor with big hair and a cheap dress. Her name is Jen Reid. When the statue of Colston was defaced and torn down by the Black Lives Matter mob, she climbed atop the empty plinth and made a fist to the sky because she thought she was Beyonce…or something.

Obviously she is now supposed to be some kind of heroine for the movement. I am not sure why — maybe it’s because she says the “f” word a lot? She describes herself as a “Black Lives Matter activist,” which, if Meghan Markle is anything to go by, means she is unemployed and squatting in someone else’s home.

Ms. Reid says she “did it for George Floyd,” which seems to be the stock answer for any kind of violent act by Black Lives Matter, from smashing storefronts to burning flags to looting cheap underwear from Target. I am sure George Floyd is thrilled with these meaningful tributes* (*British sarcasm).

When the Black Lives Matter mob tore down the Edward Colston bronze on Sunday June 7 and rolled it into the river they celebrated their thuggery as if they had really achieved something. They had claimed a scalp (albeit in bronze) of a man who was actively involved in the slave trade and the shipping of human flesh.

Clearly, this is a difficult truth of our shared history. But as I watch NGOs on America’s Southern border supporting a new trade of illegals into the USA, profiting from every human head they successfully deliver to Catholic Missions or Lutheran Church organizations, I wonder just how different things are today?

The shipping of human flesh remains a very profitable business — only the traders have changed. Today they are Soros-funded leftists, or “charities” claiming to save lives, whilst delivering their pound of flesh just the same. And unlike Colston, the profits are not being put back into almshouses or hospitals for the poor as validated by so many of the buildings in Bristol bearing Colston’s name.

Since being retrieved from the water, the statue has been in the hands of the city’s museum service which will eventually put it on display in a building nearby. The cleaning team say they were careful not to remove the graffiti from the statue:

“The symbolism of his graffitti’d body has been preserved and the significance it has for us will be an important story to tell.”

Give me strength! The only story told by this graffiti is that we have spawned a generation of mindless vandals, indoctrinated by leftists in education, who believe the only way to achieve in the future is by the wanton destruction of our history.

The 3D-printed model thrown up in its place is entitled: “A Surge of Power 2020”. Ms. Reid went straight from posing as Beyonce at the protests to the studio of “artist” Mark Quinn to make this possible (it’s almost as if Mr Quinn spotted an opportunity to insert himself into this story and make more profit from his work, and used Ms. Reid to achieve it).

The mayor of Bristol said the statue was “not requested and no permission was given for it to be installed.” But of course who needs rules or regulations if you are a terrorist organization? Evidently in the UK today, if you are black or minority ethnic you can do exactly as you please. The BBC could not promote the illegal artwork enough, endlessly pushing interviews with bearded soy boys and ugly women saying how simply “terrific” they thought it was, despite the fact that this 3D print-work has the artistic integrity of something with the label Made in China.

The artist behind “A Surge of Power 2020” Marc Quinn is one of the most privileged white men in Britain. His father was an internationally-renowned physicist and he spent his early years in Paris. He was sent to Millfield — one of the most expensive private boarding schools in the country — and then on to Cambridge attended almost exclusively at that time by the affluent white elite. And by some miracle of contacts and connections (or perhaps talent?) he received solo exhibitions at the Tate, the National Portrait Gallery, and Fondazione Prada.

Black Lives Matter’s “Surge of Power” was actually the product of an elite London family with access to extraordinary funds, and the best education and opportunities money and contacts can buy. I wonder if the heritage of his family money would meet with leftist approval…

And I wonder about the mess we are in.

Was this hideous statue a strong black woman supporting George Floyd? Or a privileged white man spotting an opportunity to promote himself and make money?

Does the removal of a statue of great man who invested in opportunities for the poor of Bristol really signify progress when its replacement (albeit temporary) is a contrivance of the present, pushing profit to one white man?

And was this whole sorry event really a Black Lives Matter “Surge of Power”? Or a further castration of a movement primed to self-destruct?

The City of Bristol may have enabled the removal and defacement of a statue of Colston. But we are poorer as a nation for it.