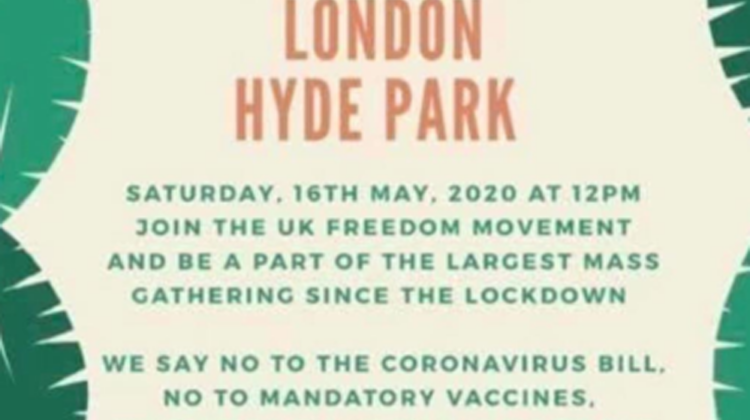 She’s a lovely English lady with a happy family, hard-working parents and a firm belief that as long as you aren’t hurting anyone else and respect the law, you should be free to live your life as you please.

Whether you choose to work like a demon, live off-grid, or identify as a cocktail sausage on a Wednesday, frankly, Fiona couldn’t care less, as long as you pay your way and mind your own business.

Fiona is also a test case in the UK.

She is due to appear in Westminster Magistrates Court in London on 19 August and her charge sheet reads as follows:

‘On 16th May 2020 at Speakers Corner, Hyde Park, London W1, without reasonable excuse, during the emergency period, other than as permitted by Regulations, you participated in a gathering in public place of more than 2 people’.

As criminal offenses go, we are not exactly talking Al Capone. But Fiona is now charged with “gathering” without a “reasonable excuse.” How very dare she?

Sitting in rural Cornwall, a farming region in the far Southwest of England (about as far as it is possible to get from the madness of London), we chatted about her decision to attend a Freedom Rally in Hyde Park after lockdown was imposed on the UK on March 26.

Privately, I am relieved. It shames me to say this out loud, but I am reassured to hear this smart, educated woman talking so coherently about her beliefs. Bluntly, our side does attract its fair share of whackos and I am relieved to find Fiona is not one.

Highly educated, a respected professional and a former First Class British Airways crew member, I hope her obvious credibility will provide some kind of armor for her in the weeks and months ahead. She is very clear that she is not your typical protestor.

“You know, I have never been to a protest before. I am not a protestor; in fact I’d say I was the opposite of a protestor. I believe in law and order. My mother and father brought me up to believe that if you work hard and play fair you will be ok. But these are rules without reason.”

And isn’t that how so many of us feel? We respect law and order and support the police. But when did a virus become a matter for law enforcement?

The Speakers Corner Freedom Event on 16 May attracted a small mixed crowd of freedom-loving libertarians — some opposed to lockdown, others fearing mandatory vaccines and most, the curtailment of personal freedoms. Image above: the Freedom Rally at Speakers Corner, a low key and peaceful occasion.

Fiona says; “The rally was about as apolitical as you can get, ethnically mixed and as far from right-wing as it is possible to be. It was a gathering of ordinary well-meaning people who are worried about the imposition of rules and controls which we have no say over.”

Fiona’s legal representative tells me that similar gatherings have been held across the UK and “other police forces have allowed these to proceed, in contrast to the Met Police, as they believe that the right to protest was an overarching Human Right that the Covid Regulations had not forbidden. So there is some sense exercised on this occasion.”

When the police moved in to disperse the small crowd, Fiona was arrested and put into the back of a waiting police van together with around twelve others, including Piers Corbyn, brother of the former Labour leader, Jeremy Corbyn.

Image above: Fiona is arrested under Coronavirus Regulations for gathering without reasonable excuse.

Held in a dirty police cell for twelve hours on a Saturday evening, Fiona passed the time drinking tea, chatting with the friendlier members of the custody team, and trying her best to ignore dubious reassurances from the inept solicitor on-call who said he would “try and have her out by Monday.” She was finally released in the very early hours of Sunday morning and her charge sheet followed shortly after in the post.

Listening to Fiona chat happily about her beloved father (an army veteran) and his belief that we should “live and be merry…. and never let your bollocks dangle in the dust,” I do wonder whether hours in custody was strictly necessary for one well-spoken British woman for an offense that is non-imprisonable. Breaching these regulations would normally attract a small fine, so why the heavy-handed arrests for Fiona, Piers and others?

Just fifteen days later, tens of thousands of activists gathered in Trafalgar Square to protest the death of George Floyd. For weekend after weekend, thousands more started into the streets en masse, signing off each time with thuggery and violence.

One observer of the BLM protests, Reverend Sally Hitchiner, commented on the sheer numbers turning up. “I am surprised to see so many people here, they do not appear to be following social distancing rules. But I think there is a huge amount of passion and that is overriding their concerns.”

You will spot the obvious double-standard. Guess how many BLM protestors were arrested and held in a cell under Covid Restrictions.

There is much more that could be said. But as my friend Tommy Robinson knows only too well, there are reporting restrictions regarding ongoing court cases in the UK and “contempt of court” penalties are particularly harsh for Conservative journalists documenting the challenges faced by white British nationals. I am restricted from commenting on the case itself.

But the broader questions raised by Fiona’s arrest and detention remain unasked:

What purpose does it serve to arrest and hold an otherwise law-abiding citizen in a cell for 12 hours and pursue court action for the non-imprisonable offense of peacefully gathering in a public park?

Why is it that COVID laws appear to apply to one group of tens of people but not another involving tens of thousands — could it be that the Metropolitan Police are actively discriminating against those politely standing up for freedom?

What takes precedence — Human Rights or new Covid Regulations? The Human Rights Act 1998 (specifically Articles 10 and 11, the freedom of expression and assembly) gives Fiona the right to stand at Speakers Corner. Does Coronavirus take those freedoms away?

But perhaps the most troubling question is a more esoteric one. Given only the bravest few are prepared to take any kind of stand against the systematic removal of our personal liberties, do the masses even understand freedom or deserve it? It has already cost Fiona her jobs and any hope of future employment. It will not end there. Most would rather steer clear.

And so the simpering majority continue to comply, as if siding with those who steal their freedoms will buy them special privileges from their captors. Their willful ignorance is overwhelming.

It is not enough to shake our heads about it in private. Or excuse our own inaction. Or be bought off by the state with furlough cash.

A few good men need to make a stand and Fiona is one of them. I wish many more had the moral courage to stand by her side.

Image above: Fiona Hine at her home in the West Country.

To read more about Fiona or to support her in the weeks and months ahead: CLICK HERE.