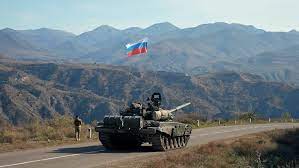 Since the conclusion of the Second Karabakh War, Russian peace-keepers have been deployed in Azerbaijan’s Karabakh region in order to ensure that violence does not escalate between Armenians and Azerbaijanis. However, in the wake of Russia’s brutal war in the Ukraine, can we really be so sure that Russia is the best country suited to keep the peace in the Caucasus region? An analysis of the current reality in the Karabakh region calls the need for their presence into question.

Emil Hasanov, an international expert on conflict resolution, proclaimed in an interview: “Russia allocated a contingent of 1,960 Russian peace-keepers based on the trilateral agreement of Azerbaijan, Russia, and Armenia following the 44-day war between Armenia and Azerbaijan. Under the tripartite statement signed to end the war, Russian peacekeepers controlled the Lachin corridor connecting Armenia and the Karabakh region and passing through the same district of Azerbaijan.”

According to him, “In August 2022, Azerbaijan commenced the new road to shift the connection between Armenia and Azerbaijani territories from the traditional corridor to the new route, and the city of Lachin finally returned under Azerbaijani control. Russian peace-keepers were obliged to withdraw the Armenian armed groups from the zone of their temporary responsibility. However, they have failed to implement this task over the past couple of years.”

He noted that there are still remnants of the Armenian armed groups within the areas that the Russian peace-keepers control, who have repeatedly resorted to armed provocations against the Azerbaijani military “including the shelling of army positions. Also, they have carried out some activities trying to build new positions, digging trenches and creating a defensive zone under the direct cover of the Russian peace-keeping forces.”

Azerbaijani journalist Elnur Enveroglu concurred: “Russian peace-keepers have been blatantly supporting Armenian separatist groups as well as arming them in certain areas of Karabakh. Russian peace-keepers violate the rules and by doing so, they do not stick to the articles of the document.   This is a total disrespect to the document that was signed between the states. Azerbaijan eight times has sent notes about Russian peace-keepers misspelling the name of the Karabakh regions such as Shusha, which they call Shushi. They misspell it in an Armenian way. Subsequently, the peace-keepers blamed the Ministry of Defense of Russia for this act, when the Azerbaijanis asked them questions about them. This shows that they support Armenian separatists in Karabakh, which violates the peace process in the country.”

Hasanov noted that Russia has not only failed to stop the Armenian armed groups active in Karabakh, but also to stop Armenia’s illegal exploitation of minerals within Azerbaijani territories in areas where Russian peace-keepers are deployed: “Recently, it was discovered that Armenian businessmen together with commander of the Russian Peace-Keepers General Volkov were involved in the illegal exploitation of Azerbaijan’s natural resources which include gold and other minerals.”

To make matters worse, Hasonov stressed that the Russian peace-keepers have also strengthened Iran’s presence in the region, especially if one takes under consideration the latest infiltration attempt by 14 Iranian citizens, of which 12 were from Iran’s southwest city of Izhe in Khuzestan, which has a sizable Armenian community, who illegally entered into the Karabakh region through a checkpoint manned by Russian peace-keepers: “The infiltration attempt occurred after the official visit by Armenian Prime Minister Nikol Pashinyan to the Islamic Republic of Iran on November 1, 2022, where warm meetings and comprehensive negotiations were conducted between Iran and Armenia.” At the joint press conference with Iranian President Ebrahim Raisi, it was stated: “We emphasized the need to investigate the economic and political relations between the two countries and their hidden potential.”

In the eyes of Hasnov, “This action itself raises questions about what Iranian citizens were doing in Azerbaijani territory that is monitored by Russian peace-keepers, especially if one takes into account the appearance of Iranian instructors in Ukrainian territory after Iran sold drones to Russia to be utilized against Ukraine. Moreover, if we look back at the history, it is not surprising that similar tactics were used by the Iranian side while deploying Hezbollah in Southern Lebanon.”

Yet, he claims that assisting Iran in infiltrating the region and failing to stop the Armenian armed groups was not Russia’s only misdemeanor in Karabakh: “Thousands of landmines were found on the territory under the responsibility of Russian peacekeepers and just recently on November 21 in Saribaba, 350 anti-personnel mines manufactured in Armenia in 2021 were detected.”

It should be added that over 3,300 Azerbaijanis have been killed by Armenian landmines since the early 1990’s. Last October, Azerbaijan’s Deputy Foreign Minister Elnur Mammadov stated at a human rights conference in Baku: “Over the past two years, more than $3 billion has been allocated from the state budget for the restoration of Karabakh. The Armenians completely destroyed the infrastructure in these territories.  Now, we need to restore these territories from scratch. However, the contamination of these territories with mines is the main obstacle to the restoration work. The Armenians still refuse to share the maps of the minefields.” And yet, landmines are still being planted in Karabakh under the watchful eyes of Russian peace-keepers.

In conclusion, Fariz Ismailzade, the executive vice rector of Ada University, proclaimed: “It is the expectation of Azerbaijan that this will be a one-term period and there won’t be a need to extend it, given that the Karabakh conflict is resolved and the Armenians that reside in Karabakh are citizens of Azerbaijan that need to be integrated. Peace and security will be provided by the government of Azerbaijan. In that respect, there won’t be a need for Russian peace-keepers any longer. I want to add that Russia has been mediating between Azerbaijan and Armenia to sign the peace treaty. So far, it has not been very successful in keeping its obligations in accordance with the Trilateral Agreement for opening up the transport corridors. Of course, there are some delays. This puts a shadow over the trust in Moscow’s role as a negotiator.”

Rachel Avraham is the CEO of the Dona Gracia Center for Diplomacy and an Israel-based journalist.   She is the author of “Women and Jihad: Debating Palestinian Female Suicide Bombings in the American, Israeli and Arab Media.”