CNN has a little nomenclatorial problem when it comes to “Palestine.” A report on its latest error, and how the network was shamed into making a correction, can be found here: “CNN Takes Down ‘Palestine’ Reference Following Watchdog Action,” by Akiva Van Koningsveld, Algemeiner, October 27, 2022: 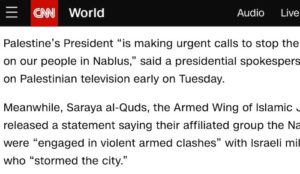 “Palestine” has no fixed, agreed-upon borders. The Palestinians answer to two separate Arab regimes – Hamas in Gaza and the Palestinian Authority in the P.A.-held parts of the West Bank, neither of which exerts full sovereignty. In the West Bank the Palestinians are not independent, but only exercise varying degrees of autonomy, based on whether they live in Areas A, B, or C, as defined by the Oslo Accords. The Palestinian Authority has a police force, but no military. At the U.N., “Palestine” has only non-voting “observer” status.

Statehood requires, as set out in the 1933 Montevideo Convention: “a) a permanent population; b) a defined territory; c) a sovereign government; and d) the capacity to enter into relations with the other states.” These qualifications have been used as the basis for statehood by the international community. “Palestine” argues that it has met these requirements and therefore has achieved de facto statehood. However, to be considered a state an entity must function independently of any other authority.

Under the Declaration of Principles and the following agreements, it is clear that Palestine is not in full control in any of these four areas. Israel has maintained its overall authority of the region.

It would seem that Palestine has fulfilled the first criterion of a permanent population. The Palestinian peoples share a common culture, history, and nationality and reside in both the West Bank and Gaza Strip. However, it has been contested whether a state can solely have a permanent population or whether it must also exert control over this population. As stated by the Third U.S. Restatement of the Law, the population must be “under the control of its own government.” While Palestine has been granted many powers over its people, it is still not independent of Israeli control,

The other criteria have met with much more controversy; the second requirement which calls for a defined territory is arguably the most contested of them all. For a state to meet this criterion, it needs to show that first, it has sovereign title over the land and secondly, that the land is adequately defined. Palestine does not have sovereign title over the West Bank or the Gaza Strip. The area was granted to Israel as early as 1917 by the British in the Balfour Declaration. In the Balfour Declaration, Britain recognized the need for a Jewish state and granted the land for this purpose. Later Britain turned the issue of a Jewish state over to the League of Nations, but the Balfour Declaration was upheld through the Mandate for Palestine. The Balfour Declaration of 1917 was a letter from Arthur James Balfour, British Secretary of State for Foreign Affairs to Lord Rothschild for the English Zionist Federation. In this letter Balfour writes, “His Majesty’s Government view with favour the establishment in Palestine of a national home for the Jewish people, and will use their best endeavours to facilitate the achievement of this object, it being clearly understood that nothing shall be done which may prejudice the civil and religious rights of existing non-Jewish communities in Palestine, or the rights and political status enjoyed by Jews in any other country.”

The Mandate for Palestine was created by the League of Nations in 1922; it set aside territory, taken from the Ottoman Turks in World War I, for the establishment of a Jewish National Home, which in time would become the Jewish state. That territory extended from the Golan in the north to the Red Sea in the south, and from the Jordan River in the east to the Mediterranean in the west. The holder of the Mandate, Great Britain, was obligated by Article 6 of the Mandate to “encourage Jewish immigration” and “close settlement by Jews on the land.”

As the League of Nations dissolved, the issue of Palestine was handed over to the United Nations. In UN General Assembly Resolution 181, the United Nations called for a partition of the land into both a Jewish State and an Arab State. Resolution 181 is often used as evidence of Palestine’s sovereign title over the West Bank and Gaza Strip, though this remains unfounded. The United Nations tried to create a state, which goes well beyond the powers granted to it by the UN Charter. As stated in Chapter IV, Article10, UN General Assembly resolutions are only recommendations and not binding law.

The UN abandoned Resolution 181 in the face of the unanimous opposition of the Arab states. It could not be revived; after the territorial gains made by Israel in 1948 war, the Jewish state would no longer have accepted it.

In the Palestine National Charter, Article 19 it states that “The Partition of Palestine, which took place in 1947, and the establishment of Israel, are fundamentally invalid…” For decades Palestinians have declared the partition void, therefore rejecting sovereign title to the area. Also, by signing the Declaration of Principles (DOP) in 1993, Palestine acknowledges that sovereign title of the West Bank and Gaza Strip had not yet been resolved. Article V of the DOP states that future permanent status negotiations shall cover the issue of borders in the future, but as of right now, Palestine does not have full sovereignty over the land. The DOP and latter agreements granted certain powers to the Palestinian Authority but never sovereign title over the land.The second part of territory is definition. As of this time, Palestine does not have a sufficiently defined territory. In the past, entities have been denied statehood due to such fragmentation. For example, Britain did not recognize Bophuthatswana because it consisted of six regions, and Lithuania was not recognized in 1919 by the Allied Powers because its borders were not sufficiently defined. In the same manner, the land of Palestine is too fragmented and too interspersed with Israelis (whom the Palestinians cannot govern) to have a defined territory. Since “Palestine” does not possess sovereign title over a defined territory, it can be said that it has not met the second requirement of de facto statehood….

Now let’s return to CNN, and its misguided reference to the State of Palestine.

As the Associated Press makes clear in its authoritative stylebook: “Use Palestine and Palestinians in the context of Palestine’s activities in international bodies to which it has been admitted … Do not use Palestine or state of Palestine in other situations, since it is not a fully independent, unified state.” [Emphasis added]

CNN, in its reporting on the Arab-Israeli conflict, has likewise referred to Abbas as the “Palestinian Authority President”…

But not in its latest reporting on an IDF operation in Nablus.

CNN’s apparent nod to Palestinian statehood can hardly be dismissed as a mere typo or figurative slip of the tongue, considering the significant role that PA unilateralism plays in the continuation of the conflict. Indeed, Abbas’ unilateral moves — a clear breach of international agreements to which the Palestinians are a party — have made peace more elusive than ever.

In “Fact-checking The New York Times: There Is No Palestinian State,” HonestReporting explained that there is a path to Palestinian independence. The Oslo Accords forged in 1993 between Israel and the Palestine Liberation Organization led to the creation of the Palestinian Authority the following year. The agreement was based on a promise by the Palestinian leadership to renounce terrorism and resolve all outstanding issues with Israel via bilateral negotiations.

To date, the Palestinian leadership has failed to live up to its obligations under the Oslo Accords that lay out a path to possibly establishing a “State of Palestine.” Accordingly, the current status of the West Bank and Gaza is not that of a sovereign country, as evidenced by Palestinian leaders who have said as much.

Khadder’s report for CNN makes it seem as if the Nablus Brigade (which PIJ claims forms part of its group) had done nothing to deserve this assault by IDF soldiers “who stormed the city.” But those “armed clashes” took place only after several attacks on Israelis by that “Nablus Brigade” of the PIJ. Nor was there any “storming of the city” by the IDF but, rather, a carefully targeted attack on the hideouts of PIJ members in the city.

It is imperative to note that PIJ is an Iranian-backed terror organization responsible for some of the worst terrorist atrocities in the Jewish state’s history. The group, which is proscribed in its entirety by the Western world, has carried out numerous horrific attacks targeting innocent Jews, Muslims, and Christians in Israel….

Notwithstanding the issue we have with the updated headline (“Six killed by Israeli forces in the deadliest day for Palestinians this year“), CNN should be commended for correcting the “Palestine” reference in response to our request.

CNN reported nothing about the PIJ except that it was engaged in “violent armed clashes” with the IDF. Nothing about its status as the most violent of the Palestinian terror groups, and no mention of any of its attacks on civilians. CNN reports only that it is engaged in fighting the IDF, portrayed as the aggressor that “storms the city” of Nablus.

Words matter. The Romans who replaced the toponym “Judea” with “Palestine” in order to efface the Jewish connection to the land have their modern equivalents in Jordan, which in 1950 turned “Judea” and “Samaria” into the vague “West Bank,” and that name, alas, has stuck. Now there are attempts to turn the “Palestinian Authority” into “Palestine,” or still worse, the “State of Palestine.” CNN offers the most recent example, by describing Mahmoud Abbas, for its tens of millions of viewers, as “Palestine’s President.” If enough major news sites, like CNN, or AP, consistently describe Abbas as the president of “Palestine” rather than “the president of the Palestinian Authority,” the world will soon believe that there is a “state of Palestine.”

These may seem to be trivial matters. They are not. Imagine if you read or heard not about “the occupied West Bank” but about “Judea and Samaria.” What kind of effect would that have on the world’s understanding of the conflict, with those two toponyms expressing the ancient history of the Jews in the Land of Israel? Try it out yourself, referring in articles on social media, conversations, letters to the editor, tweets, not to the “’West Bank,” but to “Judea and Samaria.” If enough people start to do it – repetition is the key – you will see a decline in support for a putative “state of Palestine.”

Honest Reporting was on the case immediately, letting CNN know of its error. And the error was corrected. “Palestine’s president” became “the president of the Palestinian Authority.” A small victory, but an important one.