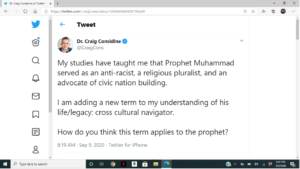 Islamic Spain was a “progressive society. It was multicultural. You had religious pluralism,” Rice University sociologist Craig Considine gushed during a November 6, 2020, webinar. Serious scholars have exposed this “myth of the Andalusian paradise,” a “fantasy Islam” propaganda trope, but Islam’s supposed medieval golden age is a staple of his debunked, new book, The Humanity of Muhammad: A Christian View.

Considine, a jihad-appeasing, former sports management student, whose confused interfaith views on Islam Muslims themselves have condemned, spoke during his still-ongoing virtual book tour. As previously examined, in his book and elsewhere he has sophistically spun the Muslim prophet Muhammad’s seventh-century subjugation of the Arabian Peninsula’s non-Muslims into a fairy tale of pluralistic religious coexistence. In this ludicrous analysis, Muhammad’s rule reflected the same “civic nation” principles expressed in the American Declaration of Independence and United States Constitution.

Whether in Arabia, America or Andalusia, Islam is ever-enlightened for Considine, who retails wholesale the arguments of his mentor, American University professor Akbar Ahmed. Considine has relied upon the book, The Ornament of the World: How Muslims, Jews and Christians Created a Culture of Tolerance in Medieval Spain to present Al-Andalus as a Dark Ages Silicon Valley. Devastated by Islamic invaders, this sharia-subjugated society had in his telling an “extraordinary level of tolerance” where “you had all of these kinds of minds from different backgrounds coming together and really putting it all together.”

In this La Convivencia, Considine has claimed, Spain’s Muslim rulers were “very open to Greek philosophy, to integrating Jews and Christians into the fabric of Spanish life.” Thus Christians and Muslims “are actually working together and they are flourishing together,” he has argued. This reflects the “sociological concept of hybridity” and how the “dialogue of civilizations is inherent in Muhammad’s experience.”

Islamic Spain’s celebration of diversity appears to Considine as a grand civilizational jam session, where scholars were “sharing knowledge for the sake of sharing knowledge.” Here occurred a “synthesis of civilizations, where these ideas of being Christian, being Muslim, kind of dissolve into something that is more human, so it is not Islamic civilization or Western civilization, it is human civilization.” “Muslims used knowledge from the world and kind of meshed it together and synthesized it and created a new type of knowledge,” he has stated. This exhibited “love of knowledge for the simple fact of loving knowledge, not caring where it’s coming from or who is giving it, just embracing it because it’s part of God’s creation; it’s part of God’s love, God’s vision for us.”

While Quran 5:101 casts doubt upon any questioning of faith-based submission to Muhammad’s religious claims, Considine asserts without any evidence that Muhammad was a Renaissance man. Al-Andalus civilization was “all rooted in a love of knowledge, and we know that Muhammad was a lover of knowledge.” Muhammad “tried to instill in the early ummah a curiosity about human beings,” Considine has added.

During an October 26, 2020, discussion with the London-based Minhaj Welfare Foundation (MWF), moderator Anam Iqbal agreed with Considine that Western societies misconstrued their histories with Islam. She noted that “Judeo-Christian elements which are widespread throughout the Western world have always set Islam a little bit apart as though it is not compatible.” Yet MWF’s founder is Pakistani cleric Muhammad Tahir ul-Qadri, the author of a 2010 book that falsely claims to rebut Islamic doctrinal justifications for jihadist suicide bombings. Despite his pretenses to Islamic moderation, he has professed pride in helping to create in the 1980s his homeland’s notorious blasphemy law, which punishes criticism of Islam with death.

Varying degrees of sharia speech repression are widespread throughout Muslim-majority countries, but Considine’s naïveté remains unfazed. He claimed to Iqbal that the late Harvard University professor Samuel Huntington “would have a hard time of defending his thesis” in his 1996 book, The Clash of Civilizations and the Remaking of World Order. The almost two decades since September 11, 2001, have hardly been years of Islamic peace, yet Considine imputed that people “oftentimes who have ulterior motives” in criticizing Islam.

Considine has actually equated “Islamophobia industry” groups such as ACT for America with Islamic State jihadists as “two sides of the same coin” for rejecting his proclaimed Islamic rainbow coalition. These groups “feed off each other. They have the same worldview. It’s a very puritanical worldview and they happen to have the same interpretation of Islam.” He has compared upstate New York’s Islamberg community, suspected of terrorism ties, to Amish communities, although “evil forces” have meant that “a lot of the coverage of Islamberg is blatantly Islamophobic.”

Muhammad was a “cross-cultural navigator,” Considine has concluded in his statements and tweets. Muhammad supposedly exemplified Considine’s mantras to

be “fearless” in getting to know one another. Humanity flourishes when we seek meaningful encounters across the perceived divides. Living in bubbles & closing in on ourselves, creates walls instead of bridges. 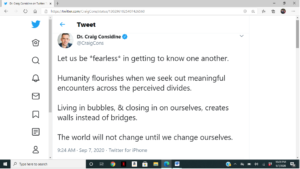 Contrary to the Irish-American Catholic sophist Considine, Yasmine Mohammed, an ex-Muslim Arab-Canadian atheist, has far more intimate and realistic knowledge of Islam. She has written extensively in her book, Unveiled: How Western Liberals Empower Radical Islam, about the oppression she and other women have experienced due to Islamic doctrines such as veiling. She has accordingly mocked Considine’s mythical Muhammad by tweeting that “cross-cultural navigator applies to his legacy of raping women from different cultures and taking them as sex slaves.”

Considine’s imagined Muhammad is no match for the real-life Yasmine Mohammed, but all past evidence indicates that Considine will never engage in any dialogue with her. For all of his pronouncements on “getting to know one another,” academic frauds such as Considine never interact with critics. His career and reputation, carefully constructed upon contrived narratives and trite platitudes, could hardly survive contact with criticism.