Robert Spencer’s new book The Critical Qur’an is a one volume encyclopedia of the Qur’an. It is a superb reference book with a sound foundation, using multiple translations. It is detailed. All of the knotty problems are solved by direct scholarly references.

In The Critical Qur’an, Spencer clarifies the problems that cloud our understanding of the Qur’an, which lurches from one subject to the next. Ideas come out of nowhere with no context. Topics – like “hell” – repeat again and again and again.  The constant repetition is tiresome.

There is no recognition of time in the Qur’an. The chapters are laid out in order of their length, not in a time sequence.  It starts with the longest chapter and ends with the shortest. To add to the confusion, it uses many strange names and foreign terms. Basically, it is unintelligible, confusing, repetitive and filled with hate towards the Unbelievers. 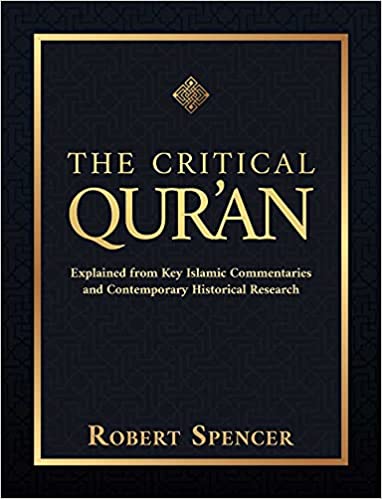 So no one can understand the Qur’an by simply reading it. There must be auxiliary commentators, exegetes, in order to find meaning in the words of Allah. Robert Spencer guides us through the mire of this contradictory and perplexing work using all the tools of exemplary scholarship.

First, there are many translations of the Qur’an. Broadly speaking, all these translations fall into two categories – soft and harsh. Here is an example using Qur’an 4:34:

Men are in charge of women, because Allah has made the one superior to the other, and because they spend of their property. So good women are obedient, guarding in secret what Allah has guarded. As for those from whom you fear disobedience, give them a warning and banish them to separate beds, and beat them. Then if they obey you, do not seek a way against them. Indeed,      Allah is always high, exalted, great.

If the Qur’an you use says “beat lightly,” then it is a soft translation. Spencer resolves the fallacious argument that what is needed to make the Qur’an understandable is a better translation.  The practical method he uses in his book gives the reader no less than twelve other translations of this verse in order to compare versions and see how they have been changed.

The main translation he provides is clear, free of the obfuscation that mars so many others.And the numerous footnotes in The Critical Qur’an function as the clarifying agents for the contradictory ideas.

The word “critical” in the title The Critical Qur’an is exceedingly important. The approach to knowledge in Western Civilization is analytical and rational, and uses the process of critical thought. There are no forbidden ideas in critical or analytic thinking. Critical thought is the approach which Robert Spencer uses to examine the details of Islam’s most holy book in order to find out the truth of its meaning.

Truth, however, has no meaning in authoritative knowledge. Truth is determined by the correct authority (Islamic doctrine) where there are only thoughts and actions that are “allowed” (halal) and those that are “forbidden” (haram).

Critical thinking exists by debate. Critical thinkers seek truth through the friction of debate in order to tease out the resolution of an idea. Authoritative knowledge forbids debate. Those who want to debate are demeaned and insulted or simply locked out of the venue. Both political correctness and Islam agree that only “allowed” opinions may be expressed and “forbidden” opinions are declared to be a moral evil.

Notice that these different points of view that cannot be reconciled. There is no possible resolution between the view of the West and Islam. The apologists of Islam try to bring about a bridge building compromise, but it is not logically possible.

According to Islam, the Qur’an is a book of the exact words of the only god of the universe, Allah. It is complete, perfect, eternal and universal.

The concepts of Islam are limited to Qur’an and Sunna of Mohammed. No logical conclusions can violate the Qur’an.

The Islamic civilization has an authoritarian intellectual basis in which no idea may contradict the Qur’an or Sunna of Mohammed. Period.

The Critical Qur’an is not just a well-researched scholarly book, but it is also a weapon in an ideological war, a civilizational war of ideas.  For 1,400 years, there has been physical war, of “blood and swords” between Islam and the Kafir world.  No one has fought harder or longer to save our civilization than Robert Spencer. He is not only a powerful intellectual thinker and writer but he is also a brilliant and courageous warrior.

I only wish this book had been written 25 years ago. It would have saved me from the time-consuming intellectual work of cutting through the thickets and underbrush of tedious research.

Dr. Bill Warner is author and lecturer on Political Islam.