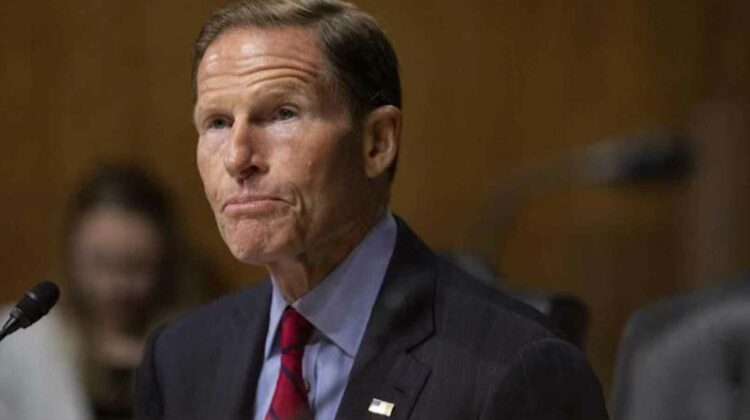 Guess what? There’s no hiding it anymore. This is a communist takeover of the USA. I’ve been making this case three hours a day on my nationally syndicated radio show since the day Joe Biden took over as president. Well, the proof is in.

Nothing proves my case like the story of Democratic United States Sen. Richard Blumenthal. You’re not gonna believe this one. It’s all out in the open now. A United States senator thought it was fine and dandy to publicly cavort with the communist enemies of America. Should that surprise you? It doesn’t surprise me. I believe many of our political, military, government and media leaders are bribed and owned lock, stock and barrel by the Chinese Communist Party.

Remember the story of Gen. Mark Milley, Chairman of the Joint Chiefs of Staff under President Donald Trump? He admitted to secretly calling Chinese military leaders and letting them know that if Trump decided to attack, he’d give them advance warning. Isn’t that treason? Shouldn’t this general have been arrested, shackled, jailed and put on trial for treason? If convicted, shouldn’t Milley be serving life in prison for treason against his country? Instead, the GOP said virtually nothing, and remarkably, this traitor is still sitting as America’s highest-ranking general. Insanity.

Blumenthal, of Connecticut, just did something equally treasonous. Except he didn’t even try to hide it. Blumenthal openly attended a Communist Party event. And Blumenthal wasn’t merely attending; he was the star of the evening. He was the main speaker on the stage and handed out awards to communists!

Have we not learned from history? Communists murdered just under 100 million innocent human beings in the 20th century. How many millions more starved to death? How many hundreds of millions were arrested, tortured, sent to prison camps and had their homes, businesses and assets stolen by communist governments?

Yet we have a Democratic United States senator who thinks it’s OK to publicly celebrate communism. Is he celebrating mass murder and starvation of citizens? Does he want to send conservatives to hard-labor camps? Is that what he wants for America? He must. He was there to celebrate how great communism is.

Let me ask you a question. If America was invaded tomorrow by a communist army — like, say, China — wouldn’t we fight to the death to defend our homeland from the communist invaders? Or would we welcome them with open arms? If the answer is, of course, we’d kill any communist invaders trying to destroy America, why would we allow senators to sit in our Senate while endorsing this same communist agenda to destroy America from within? I believe Blumenthal is a traitor.

But wait. I have one more crucial question. Didn’t Democrats claim Trump was a secret white supremacist? Can you imagine if Trump had publicly attended a Ku Klux Klan meeting? What if it was a celebration of the history of the KKK in America? What if Trump had not just attended the KKK meeting, but actually spoke from the stage and then handed out awards to KKK members? That’s the equivalent of what Blumenthal did. He laid down with sworn enemies of America, capitalism and freedom. Openly.

Why hasn’t the GOP leadership in Congress demanded Blumenthal be stripped of all his committees and resign immediately? Why haven’t they started impeachment proceedings and/or demanded his indictment for treason?

Because if the shoe was on the other foot, and Trump or any Republican senator spoke at a KKK event, their career would be over, they’d be tarred and feathered by the media, chased from D.C. on a third rail, branded as traitors and domestic terrorists, and I’m betting, soon after, indicted by the Democrat-owned DOJ for treason.

Does the GOP have any balls? Does the GOP have a pulse? Or is it a party of go-along-to-get-along cowards? We’re all waiting and watching. Because if they do nothing and say nothing about this tragic, treasonous story and if we can’t or won’t use this story to paint Democrats as the communists they are, then we have no chance to stop this communist takeover of America. Then we have already lost the battle for the soul of America.