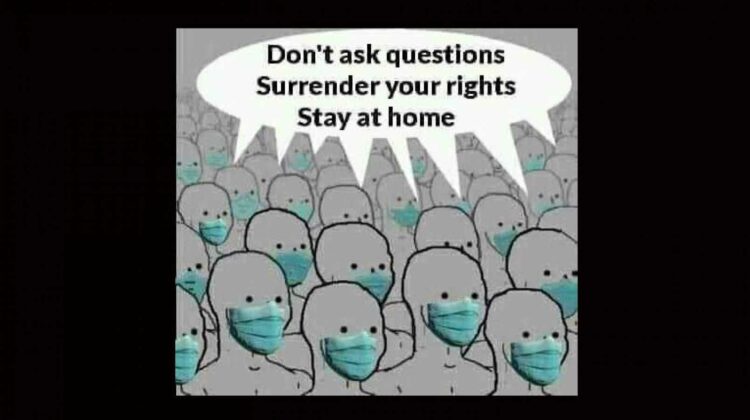 Mishlei (The Book of Proverbs) 17:15 states as follows:

One who justifies a wicked person or finds wicked the one who is righteous – both of them are detestable to Hashem.

The Torah demands of us to be independent thinkers who can discern good from evil. This is not something we can outsource to others, even spiritual leaders. They can guide us on the right path, but ultimately we are responsible to think for ourselves and draw the proper conclusions. Rabbis and even prophets should serve as support, not a crutch.

Indeed, this is one of the best ways to tell if a spiritual leader is genuine or a phony. Those who are genuine will educate and inspire their students (not followers) to grow into the best version of themselves, and ultimately to be independent. After all, no one lives forever, nor can we consult with a spiritual leader 24/7 while he is alive, so we must develop the ability to lead our own lives properly.

A phony will influence his followers (not students) to be utterly dependent on him and unflinchingly obedient to his will. His followers will be carbon copies of one another, taking after their leader down to small superficial details, and will be incapable of making independent decisions for themselves. The very suggestion that they should will outrage them, for it threatens their cozy fantasy that mindless adherence to their leader is the ideal state of existence.

These are the sort of people who just follow orders.

Although there are certainly situations in which a rabbi’s decision must be followed, like it or not, these are limited and outlined in the Torah. Those who are mindlessly “following the rabbis” are not actually following the Torah, and are probably ignorant of it altogether. Worst of all, they don’t even care. Their blind adherence to certain religious figures has superseded actual Torah law – the very thing that gives rabbis any authority to begin with.

Inevitably, this leads such people down a path that is perilous to themselves and others. It forces them to rationalize things that clearly violate the Torah. They hide behind the fact that they are following a great rabbi, which absolves them of any potential wrongdoing. The rabbi must be right. He surely knows what the Jewish law really is, he would never violate it intentionally or by mistake, and we are not allowed to even question him. There is no reason for us to study the matter ourselves, because we are incapable of understanding the rabbi’s brilliance, nor are we allowed to arrive at a different conclusion.

You can open up the books and show them black and white that the rabbi is trampling all over the Torah. They will remain entirely unconcerned by the dichotomy staring them in the face, and they will attack you for challenging the rabbi they “believe in”. How dare you not believe in him too?

This teaching in Mishlei is mainly addressing judges who twist the law. We certainly have no shortage of those in our time as well. At the same time, however, it addresses all of us, for we must constantly make judgments regarding people, information, and situations.

The people in power and their cohorts in the media are constantly trying to influence our judgments of right and wrong. They are not doing this by educating us, strengthening us, and encouraging us to think for ourselves, but precisely the opposite. They are demanding that we shut off our minds and follow them. They are appealing to our fears and desires, manipulating the lowest of human traits, while claiming to be protecting us. They are degrading us physically, emotionally, and spiritually. This is never to a person’s benefit – never.

This brings us to another teaching from Mishlei, 28:21:

It is not good to show favoritism, and a man will commit a crime for a loaf of bread.

Once a person’s ability to discern between good and evil has been degraded, he will naturally favor some people over others based entirely on practical considerations. Objective right and wrong will no longer matter. One who has no moral compass, who essentially makes it up as he goes along, will do anything for another loaf of bread.

Malbim adds that even if we know someone to be trustworthy, we cannot rely on this alone, because even such a person can be pressured by circumstances to sin for a loaf of bread.

We see how easily so many people have morally capitulated for a paycheck, or a position, or some other material convenience. Even if they don’t actively harm others, they look the other way for a loaf of bread.

On top of that, they have the nerve to call other people “selfish” for retaining the critical thinking and moral compass that they sold for a pittance. As is always the case with such people, they accuse others of exactly what they are guilty of doing. It is precisely because they are selfish, and are concerned only with their immediate convenience, that they demand others to take the same reckless, harmful, spiritually bankrupt actions they took.

Once again, the timeless lessons of the Torah are here to guide us. We must hold fast to our independent thinking. We must recognize that human nature and pressure may corrupt the judgment of even those who have previously been trustworthy. Even if we look to spiritual leaders for guidance – and we should – we must discern between good and evil, right and wrong. This is our responsibility, and each of us will be judged based on the actions we take.

Don’t sell your body, mind, and soul for a loaf of bread.

Rabbi Chananya Weissman is the author of hundreds of articles and seven books on a wide range of subjects. He is also the director and producer of a documentary, Single Jewish Male, and a series of short films. His work can be found at chananyaweissman.com and rumble.com/c/c-782463. He can be contacted at endthemadness@gmail.com.