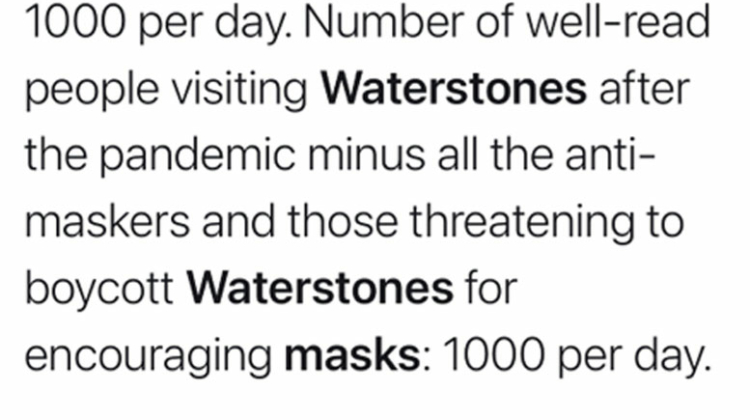 After 482 days of Covid restrictions, Boris Johnson declared the English should be set free again on Monday, July 19.

Not fully free, you understand; cognoscente of the perilous risks of breathing the same air as a stranger, super-loaded with the latest number of cases and deaths, and unsure if it’s OK to go on holiday in case the perceived Covid risk at your destination changes whilst you are there and you are forced into quarantine on your return.

It’s a bit like taking in a baby rabbit abandoned by its mother, but showing it the foxes lurking in the bushes before you re-release it out into the wild. The poor thing comes out terrified to death.

The English are sort of free, but not free in the sense that if your track and trace app pings you have to spend ten days in isolation in your bedroom. Two million are currently stuck at home because of it, with 550,000 ‘pinged’ last week alone. The Ping-demic has taken certain train lines out of action and forced businesses to close due to lack of available staff. It is lockdown by stealth.

It is almost as if Brexit created a perforated line through the English, (marked by black dashed line and a little picture of scissors), and you can still cut along this where there are major decisions being made for the country with just a minimal reshuffling of the characters on each side.

Brexiteers and those who wanted to Leave the EU typically celebrate Freedom Day and the idea of a return to individual responsibility. They are done with lockdown, sick of enforced isolation and the government app that put you there, and more than ready to throw their masks in the trash. Many of these people have felt this way for all of the 482 days they have had their basic freedoms denied and are desperate for a life that feels normal.

Remainers and those who still identify as European rather than British, or (God forbid) English, decry the day. The same old tropes thrown at those of us who voted Leave, are being used for Covid: That the ‘little people are too stupid to know what is best for them’ and ‘ignorant white gammons will be a health risk to the decent upstanding folk who know better.’

And the masked tribe has political leaders only too willing to capitalize on this divide. Even as Boris Johnson was outlining the ‘freedoms’ that would be bestowed on the people on July 19, the little London Mayor was fog-horning his own set of rules, at odds with those of the rest of England.

Sadiq Khan announced that masks would still be mandatory for all public transport in London and would be a requirement of passage, instructing staff to enforce this rule or remove passengers for non-compliance. He is the masked tribe leader in London.

Other retailers followed this lead. Waterstones – the largest Hugh Street book seller in the UK — said it was keeping its face mask policy for all staff and customers, leading to an outpouring of praise from the masked mafia on twitter.

You can almost feel the sanctimonious smugness dripping from tweets like the one below, luxuriating in the idea that once more, a better sort of person can shop and live their life untroubled by the lesser, little people. There is an explicit assumption mask-wearers are ‘well read,’ and the massless are, by extension, dumb as a deplorable with a Dollar Store discount card. 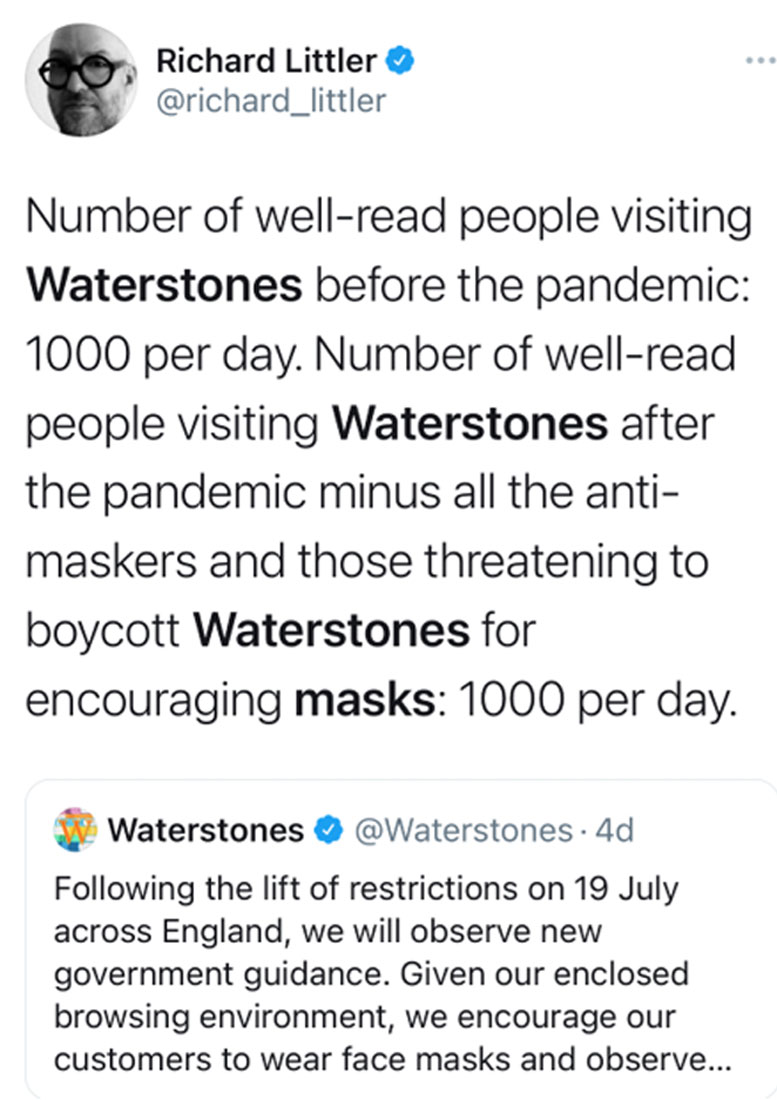 ‘Encouraging’ masks after freedom day is also a sensible business decision for Waterstones because its customer demographic closely matches the demographic most likely to comply with mask-wearing guidelines. In the UK women  buy 57.5 per cent of all print books and women are also more likely to voluntarily wear a mask in a shop.

Waterstones’ customers are also more likely to be from urban or suburban areas, because that’s where its shops are, and this, too, correlates with a higher likelihood of mask-wearing. Londoners are the most likely to say they will continue to observe infection control this summer.

Americans will see the same pattern with leftist Californians and New York elites who believe they’re simply a ‘better type of person’.

Politicians and retailers are playing to their crowds. And the crowds are lapping it up, jumping on to Twitter to declare they will be continuing to wear a mask because they are not selfish, enjoying the applause for their virtue.

This all feels very trite, very surface level — in the same way as a mask is ‘just’ a piece of fabric covering your face. Until you really think about what it means.

Politicized ‘science’ now has a uniform. If you are wearing a mask you are considered superior, well-read, selfless, thoughtful, and you are a foot-soldier for the Socialized Health Care system. You are an enforcer of all that is ‘good’. 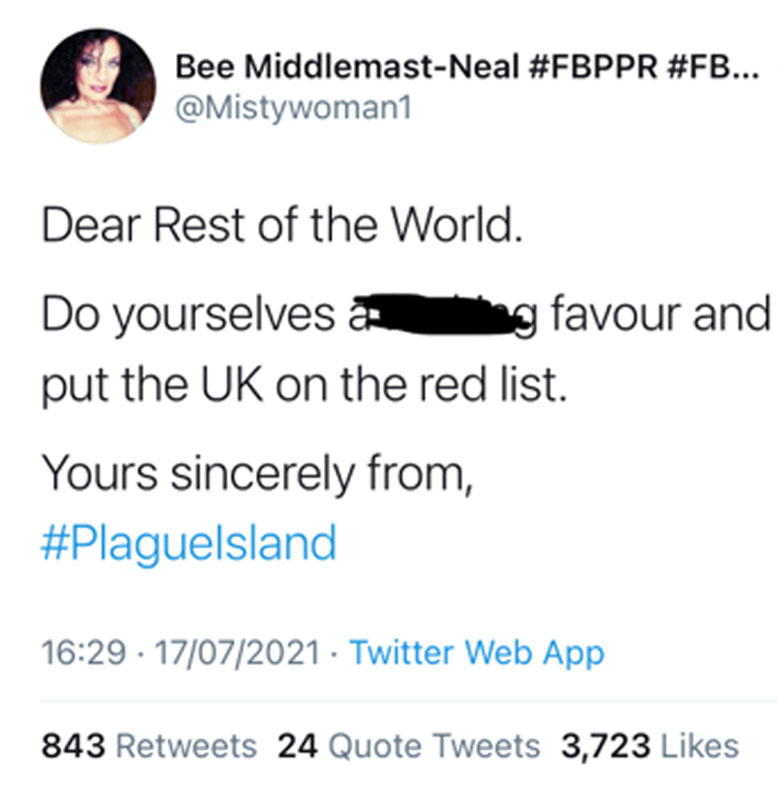 Other countries are reinforcing this attitude. France has just banned vaccinated Brits without a negative COVID test. Denmark just moved England to its red list ‘unsafe for travel’. And all the while the enforcer-class here in the UK is encouraging more countries to ostracize us for as long as we continue to be #PlagueIsland.

As with so many issues, like Defund the Police or kneeling for the National Anthem, these people are so desperate to be morally or personally right, they are more than willing to watch their country fail to prove it.

I am old enough to remember when Boris Johnson told us our captivity would be ‘three weeks to flatten the curve.’ And yet after 482 days of confinement I fully expect Freedom Day to being a brief glimpse of the sunshine before the country is forced back into the shadows again.

And the enforcer class will applaud the darkness, even as it descends.