The arrest of two young men in Marion, Iowa for vandalism has caught the attention of the Hamas-linked Council on American-Islamic Relations (CAIR).

ABC affiliate KCRG showed images of swastikas spray-painted on several windows. The letters “KKK” were also reported to have been spray-painted. Despite this, there seems to have been no ideological motive for the two 19-year-olds’ actions. Indeed, the Marion police are not charging the two with any kind of hate crime, and made the following statement.

While hate speech and racist graffiti are vile and despicable, they do not constitute a [hate] crime unless other factors are present. That includes targeting a specific person or group.

News anchor Nicole Agee tells us that “the nation’s largest civil rights organization” (yes, you read that correctly) is “not buying that.”

If vandalizing property and causing thousands of dollars in damage while spray-painting Nazi swastikas does not constitute a hate crime under Iowa law, Iowa law needs to change.

Besides telling us that CAIR is “the nation’s largest civil rights organization,” KCRG gives no explanation of who this group is or on what basis  it can dictate terms to the state of Iowa. In fact, one has the impression that KCRG considers reporting CAIR’s statement to be a righteous act.

But here yet again, there is no explanation of why CAIR is getting involved in something that has nothing to do with Muslims or Islam. However, to those paying attention to the broader context of CAIR’s nationwide TV news appearances, the answer is clear.

CAIR is getting involved because the vandals are white. And CAIR has taken it upon themselves to be the scourge of white people in America.

TV stations are complicit in all this.

If the targeting of an individual or a group constitutes a hate crime, then CAIR must be considered a serial hate criminal which is given support by the mainstream media.

This is the first CAIR TV attack this month and the 29th of the year.

In time for Halloween, the message is that CAIR will continue to gain social capital, prestige, and legitimacy until it succeeds in changing the laws of Iowa and the country. CAIR will achieve their goal unless people begin to oppose its efforts. 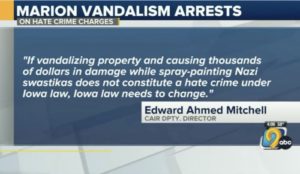 MARION, Iowa (KCRG) – A third teen has been arrested and charged for his alleged participation in a series of burglaries and vandalism in July.

Police also arrested Gary Jacobsen III, 19, of Cedar Rapids, and Zane Wilcox-Thomas, 19, of Marion, on Wednesday in connection to the crimes….

In a press release, police said some of the graffiti included swastika symbols, the words “I am a Nazi,” and “KKK.” The total damage is estimated at more than $10,000….

“This matter was thoroughly investigated to determine if a hate crime was committed but no evidence was uncovered to support hate crime allegations or warrant the filing of additional charges,” police said in a press release.

The Council on American-Islamic Relations (CAIR), the nation’s largest Muslim civil rights and advocacy organization urged prosecutors to review the case again to determine whether hate crime charges can be brought against the suspects.