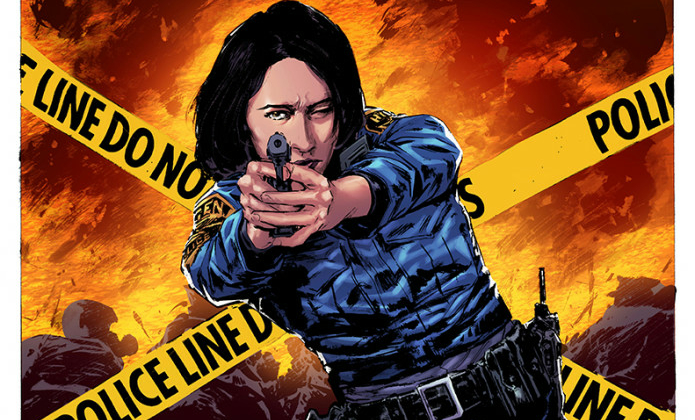 Thanks to the political and cultural dominance of the neo-Marxist left, outright war is being waged on American law enforcement today. Democrat leaders have made defunding police departments, which they smear as irredeemably racist, a prominent plank of their party’s platform. Anti-cop rhetoric from politicians and leaders of radical movements like Black Lives Matter, disseminated by the complicit news media, has created a lethal environment on the streets, where police officers are literally targeted for assassination. Cop-hating communists like former NFL quarterback Colin Kaepernick, who calls for the abolition of police and has been known to wear socks on the football field depicting officers as pigs, is elevated into a cultural icon, offered lucrative sponsorships and his own show on Netflix.

Enter longtime comic book writer and artist Mike Baron, winner of two Eisner Awards (the comic industry equivalent of the Oscars) among others. Along with police officer Joseph Arnold (on pencils and layouts) and illustrator Jeff Slemons, Baron has created Thin Blue Line, a counter-cultural, police-positive graphic novel which follows officer Valeria Baca and her partner Bob Mack as they fight for their community and their own survival amid rioting in the streets. “Mobs burn down city hall, forcing the officers to improvise on the run, relying only on their training and wits as the mayor’s protestations and eagerness to placate the rioters prove fruitless,” reads the description at the project’s crowdfunding page.

Baron opted to crowdfund the project after the concept was rejected by major publishers, who were repulsed by a story line that presented cops as heroes rather than villains. As of this writing, Thin Blue Line has earned nearly three times its goal on its Indiegogo page; all the 56 pages for the book are completely penciled and inked, and some are fully colored. Only the remaining colors and letters are left to complete the book and send it to the printer.

Baron hastens to note on the crowdfunding page that Thin Blue Line is not “a police recruitment pamphlet.” The characters are flawed and the story is never preachy. “It’s just entertaining and exciting and very simply demonstrates that not all heroes are perfect, and not all heroes wear capes.” But they do very often wear blue, despite what the propagandists of the left would have you believe.

It is a testament to the creators’ respect for law enforcement that a portion of every contribution to the crowdfunding page will be donated to one or more of the following police assistance programs:

I asked Mike Baron some questions about Thin Blue Line.

Mark Tapson:           Comics aren’t just for kids anymore like they were when I was a boy. Who exactly is the audience for comics today, and why is this an important arena in the culture war?

My first goal is to entertain. The vast bulk of corporate comics make no attempt to engage, amuse or intrigue the reader, because those writers are not interested in entertainment, leaving comic fans adrift, at least to the point where they are abandoning established publishers and embracing independent comics.

The audience is out there. If your product is outstanding, and by that I mean a story that grabs you on the first page and doesn’t let go, the audience will embrace it. Comics are a visual medium, so it helps to have good art.

MT:     Working in the belly of the beast, as it were, of the comics industry, how would you describe how the biz has changed in recent years in terms of the kinds of storytelling and messaging it puts forth?

MB:     I have no complaints about working for DC or Marvel. I can’t recall a single incident of editorial interference, but that may be because my first goal is to entertain. Editors like Archie Goodwin and Denny O’Neil worked their way up through the ranks and were engaging writers themselves. They had experience.

I have not been conversant with the inner workings of the majors in many years. When I do drop in from time to time, as I did with Captain America and Master of Kung Fu, I find no entertainment value. The stories are amorphous, confused, propagandistic. It’s not the writers’ fault. It’s the editors who hired them.

MT:     Tell us about the concept and genesis of Thin Blue Line, and about your partners on the project, officer Joseph Arnold and illustrator Jeff Slemons. And what kind of response are you getting, if any, about the idea from anyone in law enforcement?

MB:     Thin Blue Line is about two police officers trying to survive the night in a riot-torn city. I have always ripped stories from the headlines, as Punisher and Nexus readers can attest. The reason police, lawyer, and doctor shows have dominated popular entertainment is because those professions deal with life and death, which is the stuff of drama. There are no speeches or lectures in Thin Blue Line. It’s pure entertainment. It does have a point of view. Most police join to serve their communities. They put their money where their mouths are, by doing good instead of talking about it. This is the second rule of comics: show, don’t tell.

The response has been overwhelming. Law enforcement officers have reached out to me from all over the country. Some are accomplished artists and we are including their work in the book. One officer brought his family over for dinner. He said his entire department was thrilled and grateful for popular entertainment that did not condemn them as murderers and racists. Everyone contributed to a bundle which he presented to me containing a flag signed by every member of the department, ride-along coins, patches, and other items.

I have known Joe Arnold since long before he became a cop. Joe was always drawing and we’d talked about working together. When I conceived this project, I thought of Joe first. Inked by Jeff Slemons, himself a great artist, the results will knock you out. Take a look: www.jeffslemons.com.

MT:     Surely there is an under-served audience out there hungry for stories about the traditional good guys – the men and women in blue – and surely publishers would be open to catering to that audience. Or would they? What happened when you approached major publishers about the idea for Thin Blue Line?

MB:     As I mentioned above, the major publishers are not interested in entertainment. They are interested in indoctrination and “the narrative.” We all know what “the narrative” means. You see it every night on CBS, NBC, MSNBC, CNN, NPR, et al. If you deviate from the narrative, no soup for you!

We submitted TBL to every major publisher. No one was interested. Some of the responses were vicious and obscene. 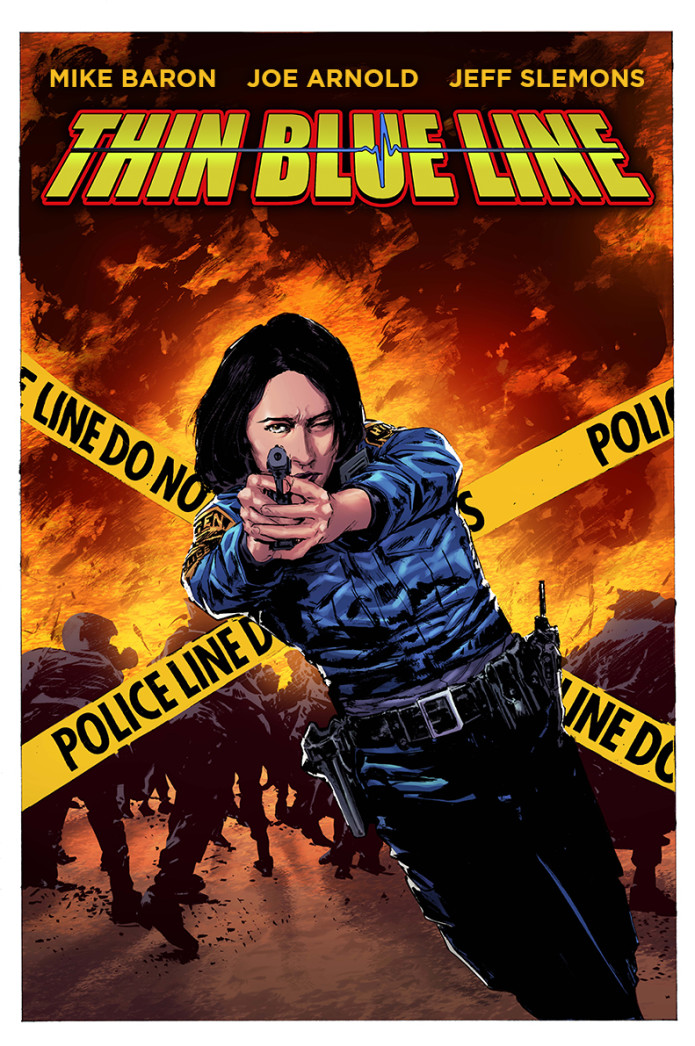 MT:     Is there any avenue in this field for conservative-minded content creators to get their work out to a wide audience, or do the woke major publishers have it locked up?

MB:     Crowdfunding. A group of disgusted professionals, many of whom worked for the Big Two, broke away. They did not name themselves Comicsgate – Comicsgate was thrust on them in derision by the sniggering upholders of the narrative. Comicsgate people seek to entertain. Their projects are taking off like rockets.

Ethan Van Sciver hosts a Comicsgate get-together on Youtube every Monday night featuring many of these creators. Graham Nolan, who created the Batman villain Bane, along with writer Chuck Dixon. Art Thibert, Aaron LoPresti, Andy Smith, and many others. Gabe Eltaeb, the colorist who famously quit DC in protest of their bastardization of Superman. Gabe was a member of our little comic group that would meet at my house once a week. So was Joe.

MT:     What can FrontPage Mag readers do in terms of helping this project get off the ground, and to support, more generally, the kinds of projects a conservative readership wants to see instead of simply ceding the whole field of comics to wokeness?

MB:     Take a look at www.thinbluelinecomics.com. Support independent books. There are a number of small publishers still dedicated to entertainment, including Advent, Allegiance Arts (who distribute through Walmart), Aftershock, and Dark Horse. Dark Horse isn’t so small, but they have been my Nexus publisher for decades and will continue to do so. Google “Nexus comic” for more info.

MT:     Mike, thanks for pushing to make Thin Blue Line happen. Keep up the good work.

Let me add that for those readers who can’t contribute financially to the crowdfunding campaign, you can still help by getting the word out on social media and, as Mike Baron reminds us, by thanking a police officer or first responder for his or her service. #BackTheBlue.