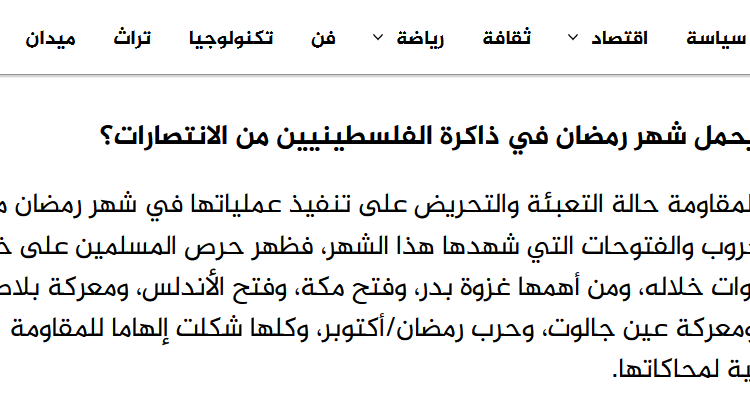 It’s no secret that Google aggressively censors anything and everything that contradicts the Left’s narrative.  Most, for example, know—or should know—that Google search results yield only what it wants you to see, not what best answers your query (which may go against the Woke narrative).

But there are more subtle ways that Google manipulates its users that few are aware of.

Enter “Google Translate,” which, according to Google, “instantly translates words, phrases, and web pages between English and over 100 other languages.”  It too is in the censoring business: if you translate something that has a phrase or few sentences that Google doesn’t want you to know or read, it simply omits them from its translation.

I only know this because I’ve been on the receiving end of Google Translation’s malfeasance (as with YouTube earlier).

On June 17, 2021, I wrote about an Arabic language article that appears on Al Jazeera.  Written by a Palestinian professor, it is about how Palestinians find inspiration in the jihads of history, “prominent among them,” he wrote, “the raid of Badr, the opening of Mecca, the opening of al-Andalus, and the battle of the pavement of martyrs [the Battle of Tours].”

Because all of these battles were unjustified and dealt with Muslims attacking and slaughtering non-Muslims simply to steal their land and impose Islam on them, the point of my article was to ask: “why are the Palestinians—who, when speaking to and seeking sympathy from the international community, present themselves as an oppressed people whose land is unjustly occupied—finding inspiration in and seeking to emulate those who oppress and steal the lands of others?”  The answer I gave was that right and wrong for most Muslims, including Palestinians, consists of who is Muslim (and therefore in the right no matter what) and who is non-Muslim (and therefore in the wrong).

Before long, I was contacted by some readers who were concerned that I had mistranslated the Al Jazeera article.  They referenced the following comment on my article at FrontPage Magazine, by one “Dan Foster”:

An honest reader would be forgiven if they thought Ibrahim were actually talking about the Al Jazeera at the beginning of this piece. He’s not of course. He seems to have forgotten that while google translate isn’t 100% reliable it: a. Exists and b. translates webpages.

So I was actually able to read the article he linked. It doesn’t reference the Battle of Tours or raids and conquests of the past.

The title gives you a clue what it actually is about:

The bulk of the article is about different attacks carried about over the course of 20 odd years.

So to all FPMers how does it feel to be lied to yet again?

So I decided to use Google Translate for myself, and, as it turned out, Foster was right: that sentence I had translated from the Al Jazeera article—about “the raid of Badr, the opening of Mecca, the opening of al-Andalus, and the battle of the pavement of martyrs [the Battle of Tours]”—is nowhere to be found in Google Translate’s English translation.  But when I went back to the original Arabic, it was still there.  For those who can read Arabic, a screenshot of the excerpt in question follows:

Now, I don’t know if Google Translate omitted that damning reference for obviously provoking the question “why are oppressed Palestinians inspired by the land-grabbing oppressors of history?” before or after I cast the spotlight on it in my article.  Since then, however, others have confirmed that Google Translate does omit that section, whereas other online translating services include it.

In short, you can now add Google Translate to all of the other nefarious ways that Google and other “big tech” censor and manipulate information.

As for commenter Dan Foster’s smug query—“So to all FPMers how does it feel to be lied to yet again?”—that question is clearly better directed at himself and anyone else who trusts, but is being deceived by, Google.