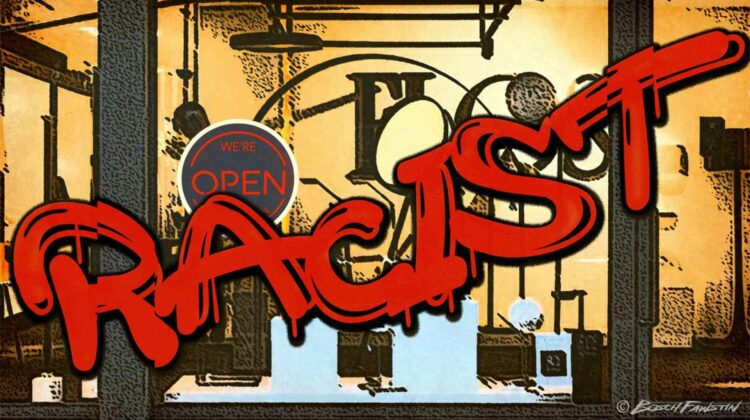 How much does it cost to have a national organization hurl racism accusations on behalf of corporate interests? While you can shop for most things on Amazon or Walmart, but even in the darkest recesses of the dark web no one has put an official price on an accusation of racism.

Unofficially though it’s another matter.

“I don’t know if she will be Hispanic-racist,” Jose Marquez-Leon, the head of TechLatino, said of Biden’s FCC nominee Gigi Sohn. “That’s a big worry.”

Sohn, an unhinged leftist, has shown plenty of bias against conservatives, but there’s zero evidence that she’s a racist or a “Hispanic-racist”. The TechLatino smear of Sohn though was timed alongside a campaign by Hispanic and Latino groups which were suddenly very concerned with her alleged racism and insisted that one of their own had to be appointed.

The average Hispanic has no idea who Sohn, or for that matter TechLatino or the

League of United Latin American Citizens are, and couldn’t care less. And those who do care are about as Latino, Hispanic, or even Latinx as Taco Bell.

Gigi Sohn and the FCC are at the center of a showdown between two powerful groups of tech interests, internet providers like Verizon, AT&T, and Spectrum, and tech platforms like Google and Facebook. Sohn, a veteran of the Ford Foundation, had co-founded Public Knowledge, a group funded by Soros and Google, that helped promote the myth of Net Neutrality.

Net Neutrality is the brand that Big Tech used to demand that the federal government regulate internet providers for its benefit and embedded into the agenda of the Democrat party. The push to regulate providers is opposed with equal vehemence by the providers. Both sides have waged a shadow war of lies, spending fortunes and launching disinformation campaigns.

The big lie of Net Neutrality was that the providers were the threat to freedom on the internet when the tech monopolies and platforms have conclusively proven that they are the enemies of a free internet. And have responded hypocritically to every demand that they stop their political censorship of conservatives by insisting that it’s their right to restrict opposing speech.

Even as they demand that the government stop internet providers from restricting them.

As a champion of net neutrality, the providers want to stop Sohn. The “Hispanic-racist” smear appears to be the latest gimmick for sinking her nomination in the Senate.

Should any of this matter to conservatives? It does if you want to understand corporate wokeness and why companies are so eager to buy into equity and cancel culture.

Al Sharpton got his show on MSNBC after lobbying in support of the Comcast-NBC Universal merger. A lawsuit later claimedthat Comcast had donated millions to Sharpton’s racist National Action Network. This kind of thing is business as usual for Sharpton, but some of the country’s biggest corporations are doing more than just paying blackmail, they’re weaponizing racism.

Black organizations played a similar role in the battle over the Comcast NBC Universal merger that Latino groups are now playing in the net neutrality battle. But the stakes in the battle between internet providers and platforms are much bigger with hundreds of billions on the line.

Why did so many of our elites suddenly embrace identity politics? As with the shadow war between mega-corps like Verizon and Google, a nation divided against itself is easier to manipulate and distract from the self-serving agendas of the power players behind the scenes.

America’s biggest corporations aren’t helpless prisoners of wokeness, they’re perpetrators waging the culture war for their own purposes. When everything is political, it becomes all too easy to dress up the man in the gray flannel suit in a red Che t-shirt. A nation divided into tribes rarely looks to see who is pulling the strings behind the curtain and a mob primed to hunt down witches, racists, or some other boogeyman isn’t interested in evidence or due process.

Big Tech embraced wokeness harder than almost any other industry because it fits the ethos of moving fast and breaking things. Turning cities into violent hellholes through criminal justice reform hollowed out what’s left of street level retail, putting even more of the economy online. Radicalizing politics through social media turned those companies into political power brokers, able to deplaform a president or a party, and to shape the outcome of an election at a whim.

This was the process that took Sharpton from a local huckster to a national figure. It’s why pseudo-academic racists like Ibram X. Kendi are a hit on corporate campuses and why identity politics affiliate groups are springing up across the Fortune 500. Mau-mauing was too good an asset to be allowed to remain in the hands of a bunch of urban ministers and campus activists.

We live in an era in which the co-founder of Occupy Wall Street went to Davos and launched his own cryptocurrency, in which hating America is an athletic shoe brand and a Netflix deal, in which the country’s rising socialist movement, including social media influencers like AOC, is brought to you a founding engineer at Stripe, and in which companies that exploit the labor of African 8-year-olds working on plantations force their workers into racial struggle sessions.

The only question isn’t whether it makes sense for corporations to use front groups to smear their enemies as racists, but what it costs to do it in our brave new woke world.