Police Chief Kevin Davis of Fairfax County, Virginia, announced Friday that “we have increased our police presence throughout the county to include major thoroughfares, transit hubs, shopping plazas, and shopping malls.” This was reportedly in response to a terrorism threat; police sources said that their increased presence would last through Halloween weekend and possibly through election day on Tuesday.

The odd aspect of this announcement, coming as it does from deep-blue and electorally vulnerable Virginia authorities, is that the threat doesn’t come from those “white supremacists” we keep hearing so much about but who only ever seem to appear as deep fakes by the Left. Instead, it comes from that so-very-2015 threat that we all know is over and done with since the adults are back in charge: the Islamic State (ISIS).

ISIS, said CBS News, “has been more active since the U.S. withdrawal from Afghanistan in August. Officials say threats from the international terrorist group and al Qaeda are accelerating.” And according to the Department of Homeland Security’s intelligence chief, John Cohen, “Right now we’re seeing a dramatic increase — or an increase — in online activity by media operations associated with different al Qaeda elements and Islamic State.”

Meanwhile, Jack Posobiec of Human Events tweeted late Friday evening: “Two US officials tell @HumanEvents that the ISIS threat alert in Northern VA / DC region is related to Afghan refugees.” He added that some Secret Service agents “are concerned DC-area ISIS threat may be related to a report of 3 Afghan refugees who forced their way off a bus earlier this month.” 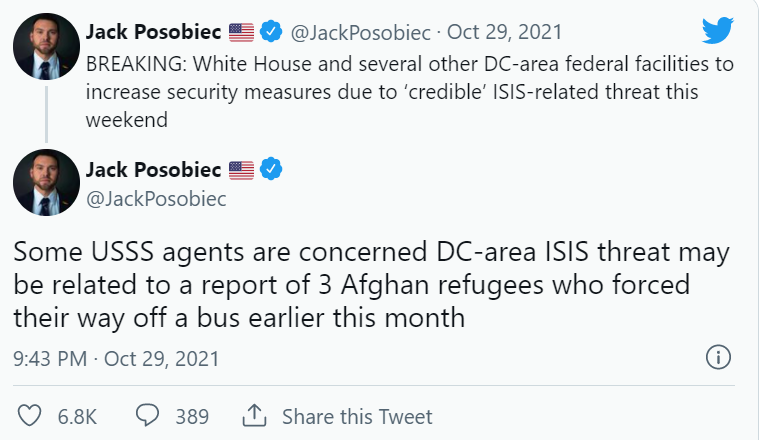 There is nothing incredible about this. Defense One reported in late August that “security screeners at Al Udeid Air Base in Qatar have detected that at least one of the Afghans who was evacuated from Kabul Airport has potential ties to ISIS, a U.S. official confirmed to Defense One.” How likely is it that he was the only one?

Business Insider reported on August 15 that “thousands of inmates, including former Islamic State and al-Qaeda fighters, were released from a prison on the outskirts of Kabul… Footage published by an independent Afghan news agency, which supports the Taliban, appears to show militants letting the inmates out.” What possible safeguards have been in place in Kabul to prevent some of those jihadis from coming to the United States as “refugees”? How likely is it that the strongest, most violent, and most ruthless among the Afghans were able to muscle their way onto the planes to America?

What’s more, witless and woke Biden administration authorities have no idea who many of these refugees are. Rep. Darrell Issa (R-Calif.) recently disclosed that 12,000 of the Afghans who are at this moment in the United States were brought here despite the fact that they had no identification at all: “They came with nothing. No Afghan I.D., no I.D. of any sort. Those people were all forwarded on to the U.S., and that’s quite an admission. So many people had no I.D. whatsoever and yet find themselves in the United States today based on what they said.”

Who could they be? Well, they could be any number of things, and one of them is that at least some of them could be members of ISIS.

Nor do authorities know where many of these refugees are. Reuters reported at the beginning of this month that at least 700 Afghan evacuees engaged in “independent departures” from the U.S. military bases where they were being housed. Over 300 have vanished from Fort Bliss alone. Are some of them in Northern Virginia now, plotting a jihad massacre?

Whether they are or not now, it is likely that some Afghan jihadis did enter the United States with the refugees and that we will be hearing from them sooner or later. One of Biden’s handlers has admitted that ten of the Afghan evacuees have already been detained as risks to national security. How many more have managed to navigate through the Biden administration’s shoddy vetting processes (this is a regime that doesn’t even acknowledge that Islamic jihad terrorism exists, much less knows how to spot warning signs of jihadist sympathies) and are now in the United States? We will find out sooner or later, and if not in Northern Virginia over the Halloween weekend, then sometime soon, somewhere in the United States.

Even worse: The Biden administration’s handling of the Afghan evacuees is just one of the ways in which it is proceeding with absolutely no concern for national security or for the safety and well-being of the American people. The consequences will eventually be catastrophic, not for the cosseted elites who have brought this upon us, but for the ordinary Americans who, as always, have to bear the burden of their America-last policies.

Robert Spencer is the director of Jihad Watch and a Shillman Fellow at the David Horowitz Freedom Center. He is author of 23 books including many bestsellers, such as The Politically Incorrect Guide to Islam (and the Crusades), The Truth About Muhammad and The History of Jihad. His latest book is The Critical Qur’an.