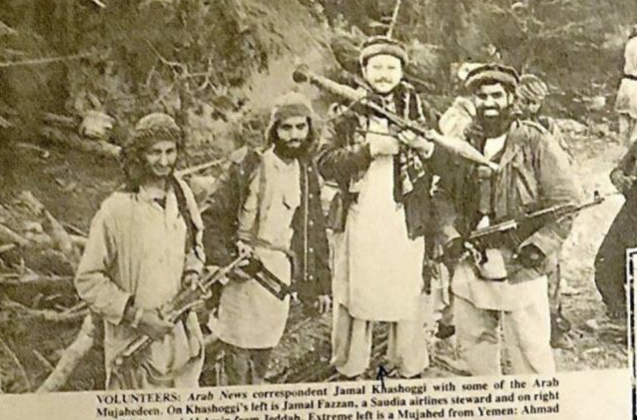 The media is having fits over Pompeo’s rather mild dismissal of Saint Khashoggi as an activist who was playing at regime change in a very dangerous game.

It’s not hard to see why.

The AP’s story alleged that Qatar employed Kevin Chalker, a former CIA officer, and his company, Global Risk Advisors, to target opponents of the Islamic terror state which has ties to everything from 9/11 to Hamas to the Taliban. That included “pitching a sprawling covert influence operation to damage the reputations of U.S. officials perceived as Qatar’s enemies.”

One of those “enemies” of the Islamic terror state may have been Rep. Mario Diaz-Balart.

In 2015, the Republican congressman and Senator Ted Cruz introduced the Muslim Brotherhood Terrorist Designation Act. This would have been extremely inconvenient to Qatar, which hosts Muslim Brotherhood figures and backs the Islamist expansionist movement whose goal is to take over countries and impose the brutality of sharia law on their people.

The media and our political elites have been cheering an Osama bin Laden pal who would be happy to see Saudi women put in their place. (Sadly, Khashoggi didn’t live to see the Taliban win, but wherever he is, he’s looking up and watching them beat women with a smile.)

The Washington Post, which platform the terror supporter, is not happy.

“His only offense was exposing corruption and oppression among those in power — work that good journalists around the world do every day,” Ryan said in a statement Tuesday, adding, “It is shameful that Pompeo would spread vile falsehoods to dishonor a courageous man’s life and service — and his commitment to principles Americans hold dear — as a ploy to sell books.”

Perhaps Fred can explain to us which of these Khashoggi principles, Americans hold most dear.

Murdered journalist Jamal Khashoggi was a close friend of Osama bin Laden and cried when the al-Qaeda leader died, it has been revealed.

‘I just fell apart crying heartbreak to you, Abu Abdullah,’ Khashoggi tweeted hours after bin Laden was confirmed dead in May 2011.

‘You were beautiful. brave in those beautiful days in Afghanistan before you succumbed to anger and passion’, the Arabic tweet added.

The media cries as hard for Khashoggi as he did for his terrorist buddy.

In high school, Jamal Khashoggi had a good friend. His name was Osama bin Laden.

“We were hoping to establish an Islamic state anywhere,” Khashoggi reminisced about their time together in the Muslim Brotherhood. “We believed that the first one would lead to another, and that would have a domino effect which could reverse the history of mankind.”

The friendship endured with Jamal Khashoggi following Osama bin Laden to Afghanistan. Khashoggi credited Adel Batterjee, listed at one time as one of “the world’s foremost terrorist financiers” by the Treasury Department, with bringing him to Afghanistan to report on the fighting.

The media calls Khashoggi a journalist, but his writings from 80s Afghanistan read as Jihadist propaganda with titles like, “Arab Mujahadeen in Afghanistan II: Exemplifies the Unity of Islamic Ummah”.

And when Osama bin Laden set up Al Qaeda, he called Khashoggi with the details.

These may be the principles that the Washington Post holds dear. Not America.

When the other 19 hijackers perpetrated the attacks of September 11, Khashoggi wrote that the Saudis would not “give in” to American “demands” for “unconditional condemnation” and “total cooperation”.

“Saudis tend to link the ugliness of what happened in New York and Washington with what has happened and continues to happen in Palestine. It is time that the United States comes to understand the effect of its foreign policy and the consequences of that policy,” he declared.

These are Fred Ryan’s principles. Not America’s.

And since the Washington Post keeps falsely claiming that Khashoggi was some sort of supporter of free speech...

“Crown Prince Mohammed bin Salman should get rid of his complex against the Muslim Brotherhood and stop treating them as the enemy or a threat to Saudi Arabia,” he said.

“This is a big mistake.”

Khashoggi, who spoke to Al Jazeera from Washington, DC, expressed hope that Saudi Arabia would go back to assume its leadership of the Arab world and shift its focus to the causes that are very important to the Arabs, mainly to support the Palestinians in their struggle against Israel.

He deplored the authorities’ decision to allow some in the Saudi news media to express support for Israel against the Palestinians, while journalists and intellectuals known to support the Palestinian cause were put in jail or felt afraid to speak out.

And Khashoggi was obviously a supporter of Hamas killing Jews.

This is how Hamas leaders Khaled Meshaal and Ismail Haniyeh appeared, taking pride as they spoke confidentially, spelling-out new conditions and describing a new reality. They have revived the Palestinian issue.

Everything in this war is new, including the weapons that entered Gaza; how did they enter despite the siege? Thousands of rockets entered a small country that is besieged from the land, sea and air. This fact alone is a miracle. …

The distinguished combat performance of its men and the huge network of tunnels that extends for miles under Gaza and the borders with Israel and Egypt were used brilliantly to inflict unprecedented losses on the enemy; they will be used and reused whenever the enemy invades. All of this proves that the movement wasted no time while ruling in Gaza.

This is what the Washington Post considers good journalism.