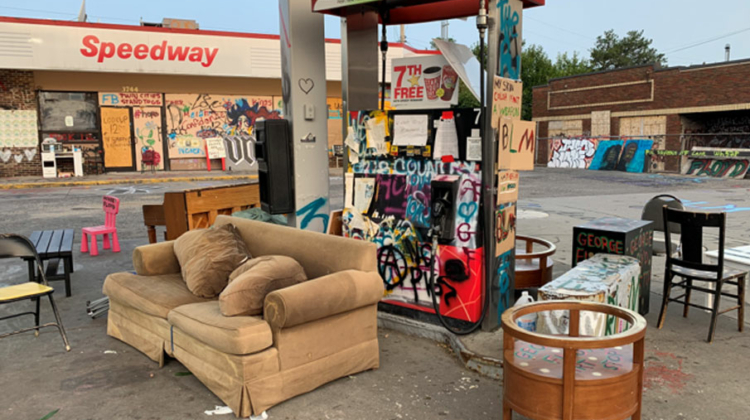 It’s a strange time to be staying in Downtown Minneapolis.

This apartment block on 5th and 7th is all but empty. There are long corridors of fresh paint and new-smelling carpets and a reception area with fancy furniture and free coffee all set to welcome people, except the people never came.

If I lacked purpose, I could go for days without seeing a soul, and even chance meetings near elevators or stairwells make people scurry away like frightened rats.

No one comes here anymore.

As I walked back from NoGo Minneapolis yesterday, a man rose from his little group of thieves to follow me as I passed, putting a scarf across his face as he approached to take whatever I had. He was different from other men in other cities who have done the same, and knew in a heartbeat my reactions mattered in this moment, if I was to walk away unharmed. This man had nothing to lose.

The streets are eerily empty too. Its like the day after some kind of apocalypse where shocked survivors venture out to find water, only to quickly scurry away, hugging the outline of buildings in the shadows with their faces down to the curb. 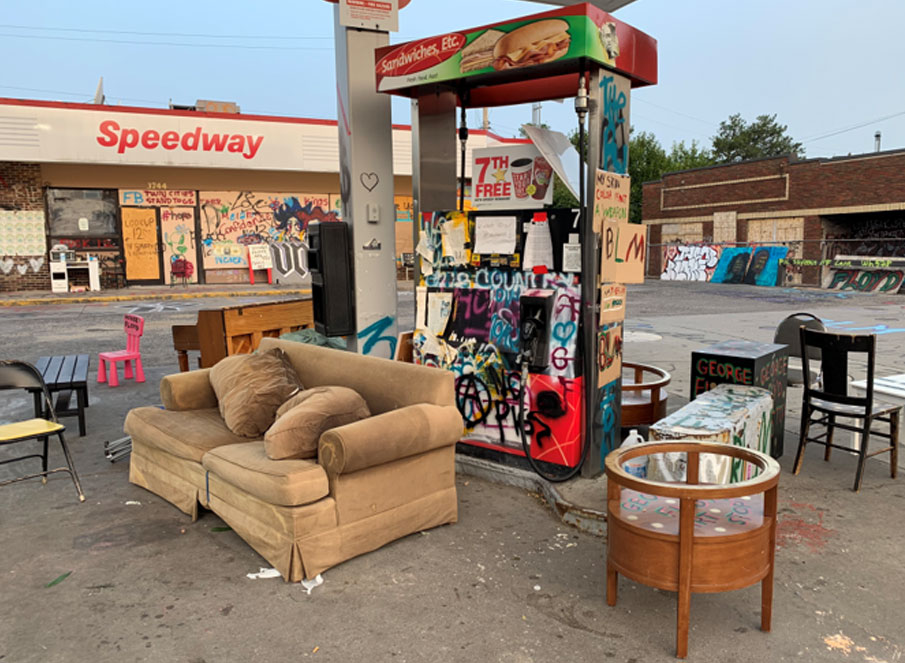 Lost people want to believe in something, anything. They need to in order to endure another day.

Some think they can find it in the bottom of a bottle — their sadness never quenched. Many here put their faith in drugs; the stained pants and vomit splashes on the t-shirt of the man who passes me when I go to find food makes me less sure I want any after all.

These lost souls explain George Floyd too. Not just his death from fentanyl and drug abuse, but the cult-like worship of his name after he died. The half-dead lifted him up to give themselves something to believe in. Abandoned by all others, they raised up George Floyd and prayed to him instead. At least he was somehow one of them, failing right alongside them in this festering sewer of a place.

I walked to 38th and Chicago to spend time at the streets his disciples have turned into the “State of George Floyd.” Barricaded for two blocks in either direction, filled with the stuff of protest and vigil, these streets have become a kind of church to these people — albeit in the open air and carpeted with asphalt and stickiness. The pews are made from old sofas, peppered with holes from a thousand cigarettes, marooned in a place where gas used to pump and incomes were made.

George Floyd’s face is painted large across the altar, strewn with flowers and notes from strangers telling him how sad they are that he is gone. They never knew him, probably would not have cared much for him if they did. But they pray to the idea of him and these days in this hellish place, an idea is enough.

It’s only 7a.m. but the volunteers of the George Floyd street church are already doing their duties at this place of worship for an addict. One lady waters a spider plant hanging from the shelter.

Another tall gentleman sweeps glass and shuffles signs about, waving to familiar faces in cars as they pass down side streets. A woman with a kindly face collects last night’s candles and replaces them with fresh ones. Its dystopian and my brain kicks me in the spine to wake up.

This can’t be real.

But it is. The guilty whites from their nice homes — are here to tend to the Church of George Floyd to compensate for their color. These whites bend more than a knee to the mob who will kill them when they choose. I see it in their yard signs too. “Black Lives Matter” hammered into the lawns with the determination of a man building a fence around his home.

They think these signs will save them. They are wrong. The mob will come for them soon.

Just a few blocks from this place, little Andre Conley was gunned down where he stood. He was a 17-year-old boy with a big heart and he saw the need for change in this place. Standing with his friends outside a supermarket, he was shot by a man in a car. And Andre began to die, right there where he stood.

His mother surely knows his life mattered. But it becomes increasingly hard to believe in this living hell, where life is lost on a street corner at the hands of a stranger. In the last few days alone I’ve watched a catalogue of horrors: a doctor shot in the head for the want of his car; that boy, spent on the sidewalk for supporting the wrong guy. Another officer spat at, told “F*ck you” to his face. The memorial to George Floyd is a contrivance and a lie.

I go to the polite places in pretty neighborhoods of Minnesota where wealthier whites in tennis pumps feel smug about their lawn signs for Biden. One is demanding a ban on unpaid library fees and my stomach tightens at just how out-of-touch these fools are from the reality not four blocks away. I want to jump from the car and shout at them. Do you not see? Can you not hear? Do you not know what is coming your way? I will not enjoy their fate.

The mob will come again. They are waiting for it, preparing for it now. They will come to the suburbs, they will burn these homes and, given the chance, white women will be raped. I know this restlessness well. I have lived it in South Africa and in migrant camps at Calais and I can feel it here too. It is like the devil rising; when the mob runs the adrenaline, lust, base instincts and greed take over. In the frenzy, women will be set on and violated right next to the Kamala sign they are so proud of today. 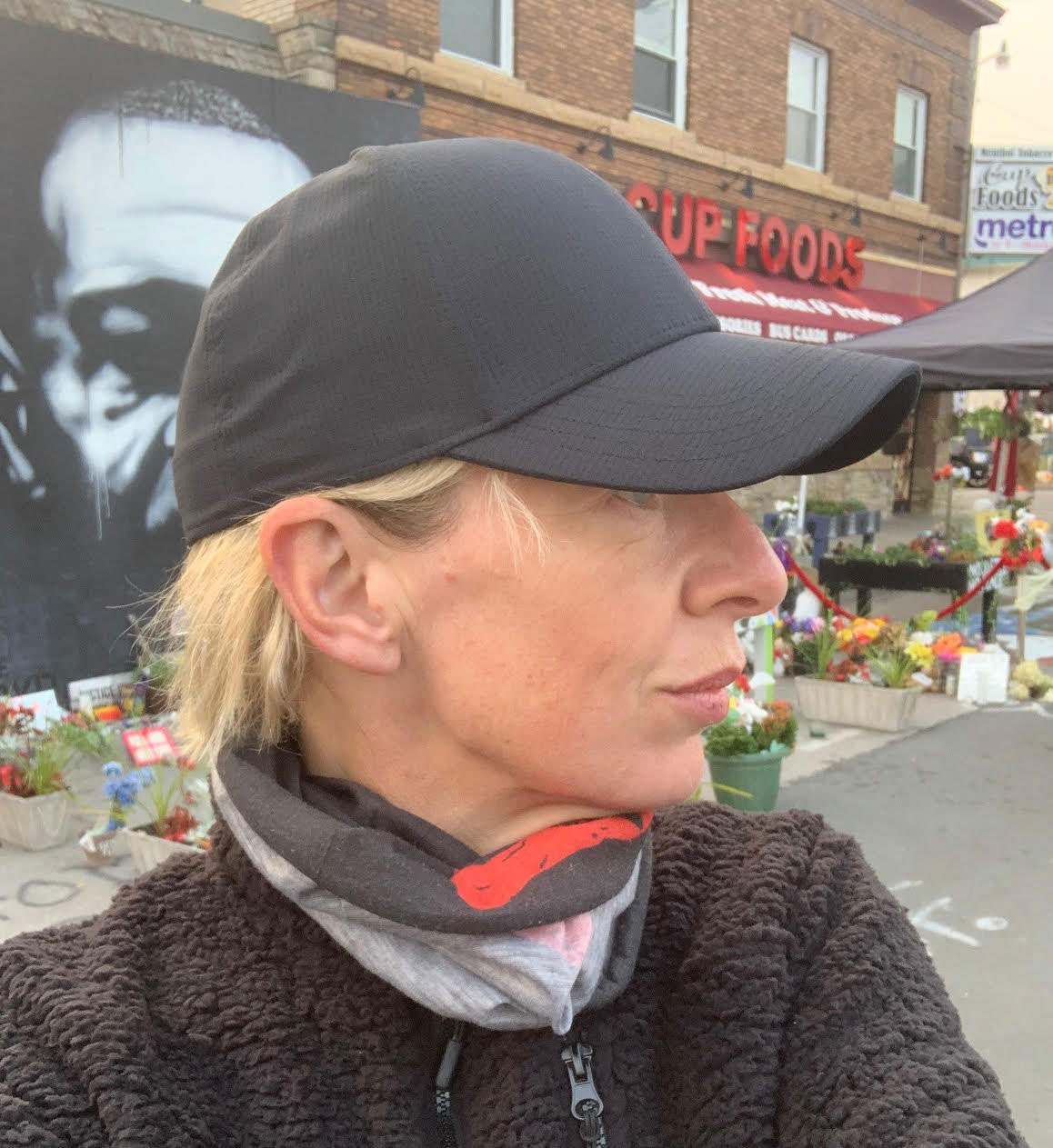 And so they sip wine and sit. And talk of more acceptable things, like how their child is suffering under lockdown, or the suicide of their friend’s 17-year-old in front of a train. They are complicit in their own fate, with their yard signs about library fines or about black lives that matter.

But in the aftermath, those sustained by the bullsh*t of the church of George Floyd will come, and they will raze this city to the ground. This time they are coming for the suburbs, and no one will be spared.