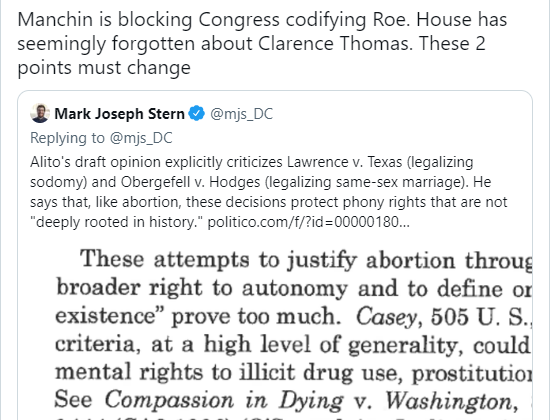 The Left is in an apocalyptic mood after the leak of Justice Samuel Alito’s draft opinion that may, if the intimidation campaign that the leakers were hoping to provoke doesn’t succeed, herald the end of Roe v. Wade. If the Supreme Court really does overturn Roe, it won’t even mean the end of legal abortion, as the states would be free to make their own laws concerning the practice. But Reps. Alexandria Ocasio-Cortez (D-Ditzville) and Eric Swalwell (D-Fang Fang) want you to believe that this is just the beginning of a MAGA wave so large that it threatens to drown every pet Leftist cause and then some. According to these and other hysterical Leftists, Alito’s draft decision, which may not end up being anything close to the majority decision at all, is just the beginning of a movement of conservative meanies who are going to destroy everything the Left holds dear. Hey, we can always hope!

AOC tweeted Monday evening: “As we’ve warned, SCOTUS isn’t just coming for abortion – they’re coming for the right to privacy Roe rests on, which includes gay marriage + civil rights. Manchin is blocking Congress codifying Roe. House has seemingly forgotten about Clarence Thomas. These 2 points must change.” AOC was referring to the fact that Manchin on February 28 voted against the Women’s Health Protection Act, which would have protected “a person’s ability to determine whether to continue or end a pregnancy, and to protect a health care provider’s ability to provide abortion services.” According to Newsweek, “it proposed that the U.S. attorney general could sue any state or government official who violated its terms.” 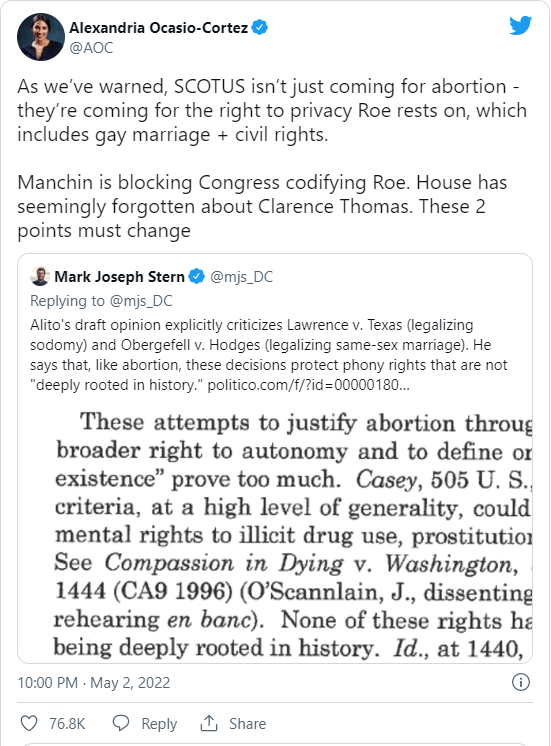 AOC is likewise gunning for Justice Clarence Thomas and wants to see the House of Representatives impeach him because Thomas’ wife is a known conservative who doubts the absolute integrity of the 2020 presidential election. If Manchin and Thomas aren’t eliminated, the renowned congresswoman is desperately afraid that not only gay marriage but “civil rights” itself will be next in the crosshairs of these sinister Trumpian Justices.

Civil rights? Really? This is just the sort of hysteria we have come to expect from Leftists whenever they suffer a setback of any kind. So if Roe is overturned, does AOC think Brown vs. the Board of Education of Topeka will be next, and we’ll be back to segregated schools, whites-only water fountains, and rogue racist cops with rabid police dogs setting fire hoses on peaceful protestors? She probably does, or at the very least she wants you to think that so that you’ll be energized to join the intimidation campaign against the Justices who might be likely to vote to strike down Roe that the leak was designed to provoke.

Swalwell certainly agrees with AOC that basic civil rights are now in jeopardy. Eight minutes after midnight on Tuesday morning, he tweeted: “The Republicans won’t stop with banning abortion. They want to ban interracial marriage. Do you want to save that? Well, then you should probably vote.”

Interracial marriage? What? Who wants to ban interracial marriage? It was a Democrat, Georgia Rep. Seaborn Roddenbery, who in 1912 introduced a proposal in the House that would have added a prohibition of interracial marriage to the Constitution. It is 100% certain that Eric Swalwell, who is about as intellectual as AOC, has never heard of Seaborn Roddenbery. He was likely thinking, if anything he does can be called that, of Sen. Mike Braun (R-Ind.), who found himself embroiled in controversy in late March when he was talking about how the federal government had intruded upon matters that should have been left to the states and was asked: “So you would be OK with the Supreme Court leaving the question of interracial marriage to the states?” Braun answered: “Yes. I think that that’s something that if you’re not wanting the Supreme Court to weigh in on issues like that, you’re not going to be able to have your cake and eat it too. I think that’s hypocritical.”

After the predictable charges of racism, Braun issued a clarification: “Earlier during a virtual press conference I misunderstood a line of questioning that ended up being about interracial marriage, let me be clear on that issue – there is no question the Constitution prohibits discrimination of any kind based on race, that is not something that is even up for debate, and I condemn racism in any form, at all levels and by any states, entities, or individuals.”

That didn’t save him from still being called a racist, as now support for the rights that the Constitution reserves for the states being actually given to the states is racist, as are so very many other things. But no reasonable person can have any doubt: Braun was talking about federal overreach, not about banning interracial marriage. The Left, however, is in full-out screaming hysteria mode, and Swalwell is as dishonest as ever. So what else is new?

Robert Spencer is the director of Jihad Watch and a Shillman Fellow at the David Horowitz Freedom Center. He is author of 23 books including many bestsellers, such as The Politically Incorrect Guide to Islam (and the Crusades), The Truth About Muhammad and The History of Jihad. His latest book is The Critical Qur’an. Follow him on Twitter here. Like him on Facebook here.