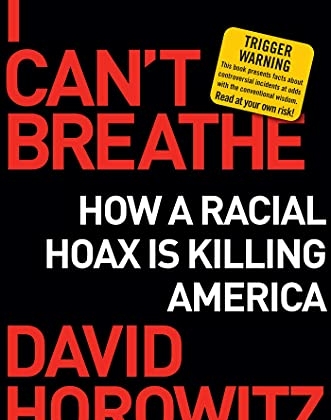 We live in an age of many lies, and David Horowitz’s I Can’t Breathe lays bare what is perhaps the most destructive lie of them all: the claim that America is a congenitally racist nation where, as Vice President Kamala Harris puts it, black people have “never been treated as fully human.” This lie has colossal implications, for it has caused countless millions of African Americans to view themselves as nothing more than pathetic, eternal victims of contemptible white oppressors, while simultaneously causing untold millions of well-meaning, non-racist whites to rebel angrily against being wrongly smeared as bigots. If ever a lie was destined to poison race relations and breed mutual contempt between blacks and whites, it is this one. But now, with a stirring assault of hard facts and blunt candor, I Can’t Breathe pounds and grinds this leftist lie into dust. In the process, the book exposes Black Lives Matter (BLM) as a violent, malevolent movement founded by Marxist revolutionaries whose principal objective is not to promote racial justice, but to foment a race war that will tear our nation apart by any means necessary. 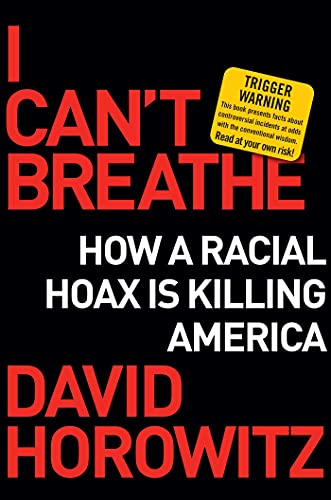 The book begins its assault by citing, on the very first page, “the disturbing video that recorded the last breaths of George Floyd” in May 2020 and sparked “one of the greatest eruptions of lawlessness and violence in American history.” It points out that not only did BLM activists play leading roles in about 95 percent of the more than 600 violent riots in 200+ cities that broke out shortly Floyd’s death, but that the organization’s foremost leaders steadfastly refused to condemn that violence. This, notes Horowitz, was “in direct contrast to the Civil Rights Movement leaders of the 1960s, who insisted on the principle of non-violence and whose demonstrations were not accompanied by attacks on police or the destruction of local businesses.”

I Can’t Breathe makes it clear that although BLM has chosen to break from the non-violent traditions of past civil rights crusaders, it is no mere fringe movement. Rather, it has evolved into a massive social phenomenon whose influence is enabled by mountains of cash donated by tax-exempt foundations, major American corporations, and millionaires and billionaires from all walks of life.

Moreover, the book explains, BLM has enjoyed the devoted and unwavering support of the Democratic Party, whose National Committee in 2015 went so far as to pass a resolution formally “affirming” the merits of BLM’s crusade against the supposed epidemic of “extrajudicial killings of unarmed African American[s]” in a nation where blacks are routinely “stripped of their dignity under the vestiges of slavery, Jim Crow and White Supremacy.” The Democratic Party’s foremost luminaries – the Obamas, the Clintons, Kamala Harris, Pelosi, Schumer, and a multitude of others – have gushed with praise for BLM and its ideals. During the Obama years, for instance, BLM leaders were invited multiple times to the White House, where they often had an audience with the president himself.

Throughout 2020, Democrats and leftist media outlets – claiming that 11,000+ “peaceful protests” had been held at more than 2,000 distinct locations across the country – argued that BLM’s public demonstrations were “mostly peaceful” expressions of dissent protected by the First Amendment. But Horowitz points out that their assertion is wholly illegitimate, in light of the fact that even those “peaceful” events: (a) “advanced the same Black Lives Matter indictment of America as a systemically racist society,” and (b) were most often “staged during the daytime and then regularly morphed into riots under cover of night.” In other words, writes the author, it is “difficult to regard the ‘peaceful protests’ as distinct and separate from the violence, rather than as fraternal accessories to it.”

As BLM’s toxic message intimidated and devoured one American institution after another throughout 2020, it became clear that Democratic political leaders across the country had neither any intention of standing up in defense of law-enforcement, nor any inclination to reject BLM’s “Defund the Police” initiatives which were gaining traction among the left. As a result, police officers quickly concluded that the Democrats who ran their respective cities could not be counted upon to back them up in any meaningful way, and that their own law-enforcement careers, their pensions, and indeed their very lives, could suddenly go up in smoke if ever there came a moment when they might need to use deadly physical force against a black criminal suspect. Thus, the police understandably became reluctant to engage criminal suspects except where absolutely necessary. This trend, coupled with the considerable destructive energies of hordes of newly emboldened criminals, led to a sudden upsurge of violence that dwarfed anything ever before seen in American history. The national homicide total rose from 16,669 in 2019, to 21,570 in 2020 – thanks mostly to the climate of violence created by BLM and its ideological allies.

Not at all chastened by the fact that its raging rhetoric and violent orientation was directly responsible for America’s national bloodbath of 2020, BLM has been relentless in claiming that the racism of police officers — and of white America more broadly — constitute the deadliest threats to black lives in the U.S.  Addressing this allegation with unapologetic bluntness, I Can’t Breathe deploys a vast array of facts and statistics which reduce it from a bonfire of wild accusations to a faint, smoldering ember deprived of the intellectual oxygen it needs in order to sustain itself.

The book also examines the cases of the most significant and highly publicized “martyrs” mourned and lionized by the BLM movement – i.e., blacks whose deaths resulted, for the most part, from violent interactions with white police officers. When one reads the accounts of their deaths, the pattern that emerges is unmistakable: In case after case, the martyrs were longtime hardened and violent criminals with volcanic tempers who refused to cooperate with police, often fled from police, and sometimes even tried to murder police. Moreover, in many instances the suspects were severely impaired by their recent consumption of large quantities of alcohol or mind-altering drugs. The absurdity of blaming police for being unable to reach harmonious resolutions with such disturbed characters, is self-evident to anyone who reads the damning summaries of these encounters.

Notably, I Can’t Breathe does not turn a blind eye to incidents where police officers, under tragic and sometimes chaotic circumstances, have killed black individuals who could not, in any way, be described as out-of-control menaces. Consider, for instance, the 2014 police shooting of 12-year-old Tamir Rice, a black Cleveland youth who was in a public place brandishing a toy gun that was an exact replica of a Colt M1911 semi-automatic pistol. Rice was shot by an officer who thought the boy was raising the gun in preparation to shoot at him. While some critics, in hindsight, contend that the shooting of Rice may not have been necessary, the officer who had to make a split-second, life-or-death decision did not have the same benefit of hindsight in that fateful moment.

In a similarly tragic situation, a young black man named Philando Castile was shot and killed by a Minnesota policeman who apparently misinterpreted what Castile was intending to do with a handgun in his possession and made a split-second – seemingly panicked — decision to discharge his weapon. In a nation where 700,000 police officers engage in countless millions of encounters with civilians each year, it is inevitable that some of them will occasionally make mistakes – just as some lawyers and civil rights activists will make mistakes, and just as some longtime felons and their acquaintances will make mistakes. Tragedies happen, sometimes even to people with the best of intentions. But when BLM seizes upon such incidents in order to exploit them as evidence of a white war against black innocents, the organization’s dishonesty and malevolence stand out in bold relief.

“If Black Lives Matter were a civil rights organization,” Horowitz trenchantly observes, “one would reasonably expect its patron figure to be Martin Luther King, and its aspiration to be King’s vision of a race-free America where individuals are judged on their merits and not by their skin color. Instead, the revered figure and inspirational icon for Black Lives Matter activists is a designated terrorist and convicted cop killer: Assata Shakur.” Formerly known as Joanne Chesimard, Shakur is a lifelong Marxist revolutionary who once belonged to the Black Liberation Army, an organization that achieved its fame by robbing banks and murdering cops. Having escaped from prison in 1979 with the help of left-wing terrorists, Shakur has lived for decades as a fugitive in Communist Cuba. Indeed, the late Fidel Castro, the sadistic dictator who protected Shakur in his island nation for many years, is yet another revered icon of the BLM movement.

“If Black Lives Matter were a civil rights organization,” Horowitz writes further, “one might reasonably expect its leaders to condemn or at least distance themselves from well-known race haters like Louis Farrakhan and Al Sharpton. But Black Lives Matter leaders embrace both of those demagogues.” Of course it does. What else would one expect from an organization that proudly endorses the Boycott, Divestment & Sanctions movement, a Hamas-inspired initiative designed to crush the state of Israel economically and politically?

And if BLM were indeed a legitimate civil rights organization, surely it would promote the formation of black families – particularly in the present era, where roughly 70% of black babies are born to unmarried mothers in fatherless homes. It is well documented that regardless of race, being raised without a father is the strongest predicter that a child will grow up to experience long-term poverty, psychological and emotional pathologies, and extended prison stays. And yet, in spite of all this, BLM openly disparages “the Western-prescribed nuclear family structure,” in favor of alternative arrangements like “collective” communities and “villages.” Why? For no reason other than because Marx and Engels saw the dissolution and abolition of the traditional nuclear family as a natural and desired outgrowth of “the abolition of private property and the introduction of socialism.” This fact alone serves as proof positive that to Black Lives Matter, the overwhelming majority of black lives don’t matter at all.

In other words, an entire year of racial strife and social upheaval that resulted in the most dramatic, sudden upsurge in homicides that our country has ever seen, was based entirely on a carefully crafted lie injected purposefully into the American psyche by a pack of destructive Marxist revolutionaries who don’t give a damn about black lives, white lives, or purple lives. By making this very demonstrable reality plain to every reader, I Can’t Breathe makes a major contribution to the vital task of finally, and blessedly, casting that lie into the dustbin of evil, discredited dogmas.