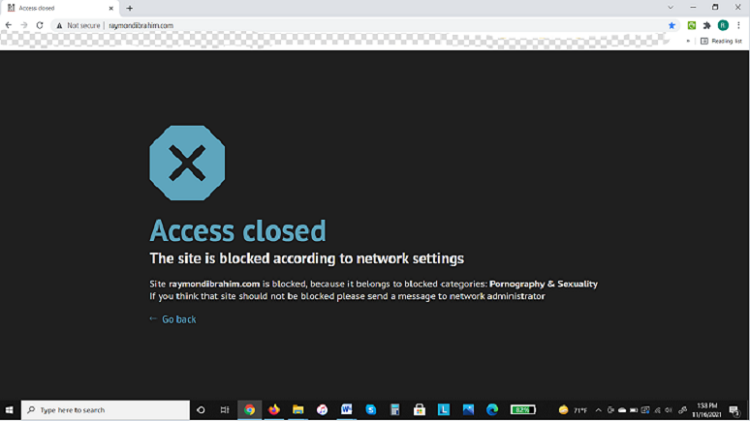 I recently discovered that some WiFi networks classify my website as and ban it for being a pornography site.

While having to drive through the Los Angeles area earlier this month—the only county in California, incidentally, that still mandates indoor masks irrespective of vaccination status—I discovered that the WiFi networks of several businesses ban access to raymondibrahim.com with the following explanation:

Access closed.  The site is blocked according to network settings.  Site: raymondibrahim.com is blocked, because it belongs to blocked categories: Pornography & Sexuality.

For example, a screenshot from the Galleria, a 1.6 million square foot mall located in Glendale, follows:

As anyone who has visited my website since its inception 16 years ago knows, raymondibrahim.com focuses almost exclusively on the Islamic question: it looks at doctrinal and historical issues pertaining to Islam, that religion’s interactions with non-Muslims—with a strong focus on Christian minorities who are regularly persecuted by the adherents of the religion of peace—and contemporary Islamic terrorism.

In what world can any of these topics be labeled “pornographic”? In the “left’s” world—where lying and cheating and doing everything possible to conceal the truth has become standard practice.

For the record, some of my articles do discuss sexuality in the context of Islamic doctrine—for example, that Muslim men can have up to four wives and as many concubines as their right hands possess (a paraphrase of Koran 4:3). However, whenever addressing such topics, I always do so through the most professional and objective language possible—never in a “pornographic” or lurid manner.

But perhaps these LA WiFi networks adhere to traditional morality and are zealous of banning anything that smacks of sexuality, no matter how remotely? So I decided to test the matter: while on a couple of the networks that banned my site, I googled and searched for sex-related topics (e.g., “rape”), and, lo and behold, countless—not a few of a rather sordid if not downright pornographic nature—popped up; and most of them were accompanied by sexual ads depicting half-naked women.

So much, then, for my site being banned because these upright LA networks are zealous about keeping any and all sexual topics from the eyes of minors.

None of this is surprising but rather in keeping with my and others’ experiences. As discussed in this article, Facebook recently banned me for posting content—an article about Muslims slaughtering Christians—that did not meet its “standards”; other “big tech giants”—including Google Search and YouTube—have also censored my writings and videos that contradict their leftist agenda and narrative—again, the Muslim persecution of Christians chief among them.

That the left is openly libeling websites that specialize in exposing and seeking to redress ongoing atrocities committed against Christian minorities as “pornography” is, of course, an old tactic. According to Brother Andrew, author of the bestselling God’s Smuggler (p.227), that’s exactly what the Soviet Union labeled and confiscated smuggled Bibles as—pornography.

Such is the current state of affairs we’re in.