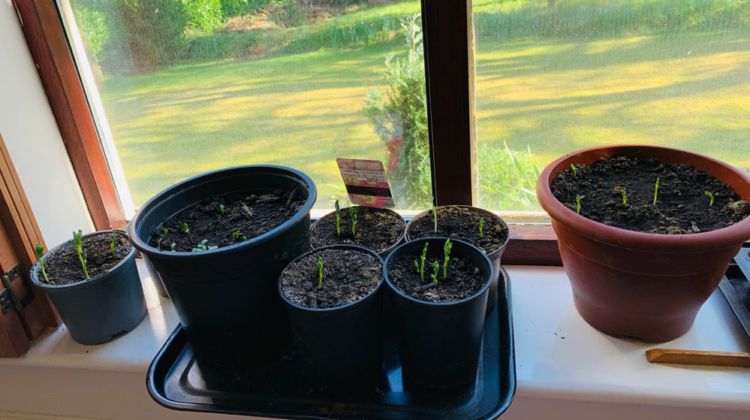 “Get your bloody heads up! Get your heads up! Hopkins, you have a face that could melt glass, but I still want to see it – get your head up now!”

The Academy Sergeant Major at Sandhurst drilled this into us pretty hard. As the military knows well, if heads drop bodies do too, so they demand you keep your head up so the men you are leading will look to you and know it will be OK, that you have your eyes on the horizon.

But right now who knows what OK looks like? Like many others, my first concern is for my elderly parents and what would happen if they caught this thing. It’s all very well me being bolshy for my own health, but my heart is glass in their hands, waiting to be dropped.

When we do get our heads up, the faithful horizon is a blur, our path ahead is a jumble of unknowns and all the signposts, once so clear, seem to have been taken down.

Even the biggest billboard, the Presidential Election November 2020, is a little wonky with talk of a postal vote. Countless dates in our diaries – speeches and rallies, events to mobilize voters and bring in undecideds – have all moved from confirmed to pending, as if our email router had gone down. Such dates were our handrail to steady us through life.

It’s not just politically that we are untethered, but personally too. School end-of-term dates are meaningless when the term will not even begin. There are no exams for my teens to force their concentration. My eldest’s birthday surprise was cancelled by the venue, and our booked vacation now feels strangely wrong in a time of eternal holiday. These things were a gravity of our own making that kept our feet on the floor.

But the thing that has really kicked the legs from out underneath me is the willingness of the majority to swallow “news” as if they were hungry for more fear to amplify the panic, and to use it to make others more anxious. Why do people insist on sharing the worst of it by WhatsApp like cats bringing in their bird kill?

The fear-merchants seem determined to avoid balance or perspective. When I try to tell my mother about annual flu deaths in a normal year, she responds with: “Yes, but did you see those mass graves in New York?”

I have been forced to quietly step out of the chat group shared by my closest friends, alarmed to see the same behaviors in the people I hold dear. First it was death rates and blind fear, and now it is the lockdown fun, and whose daffodils look brightest. From mass panic to minutiae in the space of three WhatsApp chats.

It is awkward. I can my feel jaw tighten at the faux frivolity of families showing how much fun they are having under lockdown, sharing their gym sessions in the garden, singing together in their lounge, clapping at the sky for our NHS, out-funning each other in florals, all posted endlessly online for approval. As if they are competing in some lockdown competition I wasn’t told about.

I sound like a curmudgeonly old git. Surely this is what we are supposed to do, to be all best-of-British about it and to keep calm and carry on? I do much of the same with my own family: the daily bike ride, the jigsaw puzzle in the lounge, planting seeds with my son that are now growing on my window ledge.

As a mum, I fit right in. But as a citizen, I do not. I have never felt so alone. Not because of self-isolation; it’s hard to find five minutes to yourself with a family of five. It is the grim realization of how willingly and completely the majority have been willing to hand over their freedoms in return for temporary safety. How quickly they have turned to the state for everything. And how many are desperate to act as enforcers without ever being asked. I find it heartbreaking to watch.

Many of the nine million workers furloughed by the government at 80% of their wages, often with the employers topping up the last 20%, have little reason to agitate to get back to work. Lockdown has become a holiday on full pay. In comfortable homes with outdoor space, many are quite content for it to continue. No thought for the poorest, or those trapped in high-rise hell.

Meanwhile the enforcers leave a letter on a stranger’s car, warning her that she has no business being in this street; they film sunbathers in the park to expose their selfishness; they glare at those who walk around with their faces uncovered.

I am reminded of the village supervisors in Cuba tasked with ensuring busses to Fidel Castro’s memorial were full. I stood in Havana and watched people disembark in their thousands, the poorest villagers forced to stand in silence for 24 hours, even in the blazing sun to show how much Castro was loved. The world press lapped it up.

I smell the same sweaty compliance in my country, from the workers now state-dependent and wanting the lockdown to continue, from enforcers desperate to virtue-signal their obedience, from comfortable middle-class families filming themselves clapping for our NHS even as it (the institution) buckles (cancer surgery and chemotherapy have all been postponed).

All the times I have stood on stage enthusing others to fight for our freedoms, or pleaded with Americans to defend their second amendment, or been arrested for wrong-speak or wrong-think in defense of my country and British nationals, I have been anchored in the certainty that at the level of the individual, each person will fight for their own freedom. That even though my neighbor might hold his tongue over national or even regional skirmishes, he would not be silenced in defense of his own home.

My anchor is being tested.

In this strange new Corona-world, my neighbor seems to believe everything he is told without challenge. He weeps on command at pictures of coffins. He reports me to the police for failing to comply with his interpretation of Corona lockdown. He looks to the state for income and is perversely happy to be relieved of all work and responsibility. He sees lockdown as a state-funded vacation and hopes for more. He looks to humiliate others not complying as he thinks they should. He will not question. He will only comply.

I no longer recognize the people I live amongst.

I am a goldfish on the wrong side of the bowl. The country I thought I knew is distorted beyond recognition and though I don’t have this virus, I am gasping for air all the same.

The left have people exactly where they want them; unemployed, dependent and afraid, victims all.

It is time to get our heads up. People talk about getting back to normal. I am not certain what normal looks like anymore.