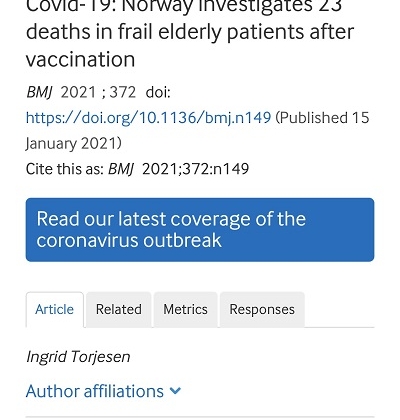 I don’t usually ask for advice on family matters.

I am a bit British about that sort of thing and was brought up to believe that family matters stay inside the house and are not fodder for other people’s entertainment or gossip.

I am self-aware enough to see I am not best placed to be helping them decide, or even sharing my own views. I believe COVID was manufactured in a Chinese lab and deliberately spread across the globe in order to create a New World Order and reward globalists in their endeavours. I am not suggesting anyone else need share my views. Nor are these views supported by the formal science community, tech platforms or the media.

If you go further down the rabbit hole, vaccine sceptics argue the vaccine is a form of population control, whether by sterilisation or by weakening recipients against future strains. And of course there are even darker theories that I prefer to leave in the shadows.

But it is headlines like this in the British Medical Journal that make my heart lurch: ‘Norway investigates 23 deaths in frail elderly patients after vaccination.’ That number has now risen to 33. 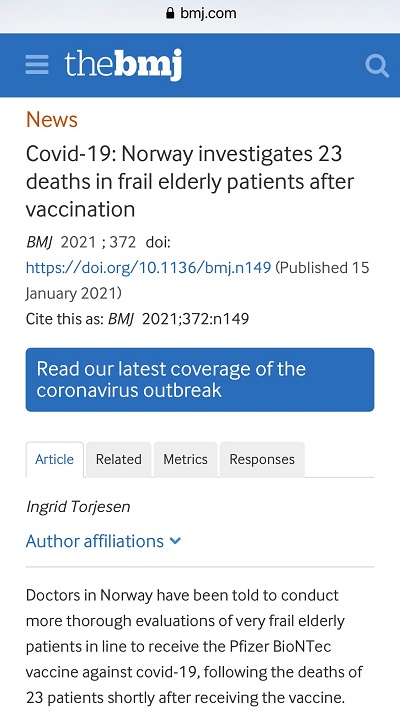 We all know statistics can be interpreted in any way you please to reinforce any prejudice you may have. After all, 33 deaths is a tiny percentage of the overall population who have received the vaccination. And if you are elderly and frail, clearly you are more at risk of succumbing to death from any cause.

But unlike a child’s game of paper, scissors, stone — where paper beats stone and stone beats scissors — statistical logic does not overcome my personal fears for my parents.

Prime Minister Boris Johnson stated his absolute priority was to vaccinate all older residents of eligible care homes in England, and to great fanfare from the compliant MSM, the government has achieved this target.

Johnson described the achievement as a ‘crucial milestone’. On Saturday, 30 January, a record 598,389 first jabs were given across the UK, meaning nearly nine million people have received the first dose of a vaccine, with about 490,000 having received two doses.

NHS England said more than 10,000 care homes with older residents had been offered vaccines, although a ‘small remainder’ of homes had visits deferred by local public health directors for safety reasons during local outbreaks.

In the interests of balance, I admit to knowing elderly people who are desperate for the vaccine. They believe it will bring them freedom from their endless incarceration in their own homes and an end to the loneliness of life in the UK. I have an aunt who lives alone and has not left her own home since March 2020. For her, a vaccine is the key to unlock the outside world.

But my parents are not my aunt. They are not residents of a care home and they are not fragile or vulnerable. They are surprisingly fit and active 73-year-olds, who have been married for 50 years and arguing for about the same amount of time. 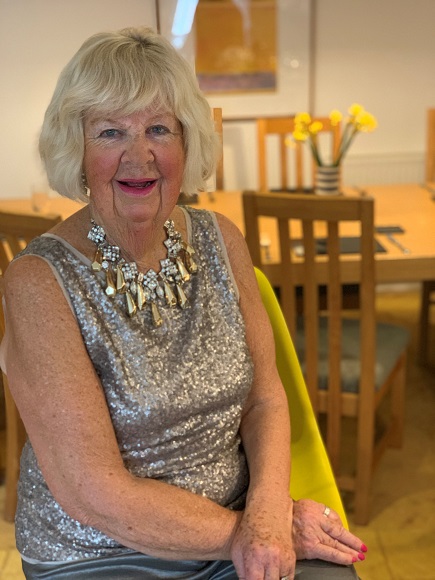 They have never had a flu jab because they ‘don’t believe in all that nonsense’, walk 10,000 steps a day because they like roast dinners and clotted cream, and were on holiday more than they were at home before the age of COVID began.

And yet, even they have signed up to take this blasted vaccine and are now waiting for their appointment. It has had to become something of a moot subject between us.

Part of their willingness to take it is based on fear of COVID. Having seen all the horror stories and images of morgues, they really don’t want to get it and maybe the vaccine might help? Part of it is the thought that a vaccine might get them back on cruise ships more quickly, especially if a vaccine passport is introduced. And a very big part of it is a daughter — my sister — working inside the NHS telling them she will not see them again if they refuse to have their vaccine. Socialised health care really is the brute squad of total state control.

Perhaps you recognise this in your own family or circle of friends — one individual who acts as the COVID police, asserting authority over who does what, where and with whom, imposing restrictions on the activity of elderly parents, delivering ever more rules with an entitled sense of superiority?

Thanksgiving really brought this to the fore. Some grandparents found themselves isolated not by choice, but because their children decided it was ‘for your own good’.

One British politician confessed she parked her car across her own parents’ driveway to prevent them leaving the house. How do such people appoint themselves as moral custodians?

I have made my feelings perfectly clear but I don’t want to be the one that makes my parents feel bad for getting the vaccine. Equally, I don’t want to make their decision harder or create more fear when we live in a country and at a time when we are already force-fed fear like geese destined for foie gras.

I can feel the hand of the State at work, elevating this infernal vaccine into an elixir of life, promoting compliance and silencing dissent.

But emotional me is still shouting. If anyone harms my funny, cuddly, stroppy, brilliant mum who isn’t at all sure she even wants the wretched jab, I will never forgive them, nor my sister, nor myself.