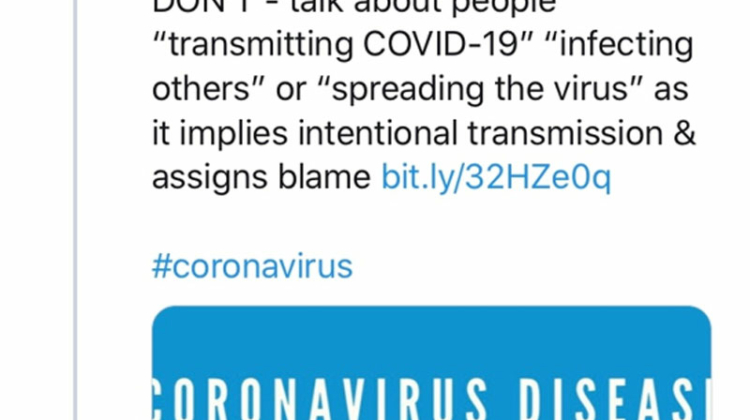 In the face of a possible global pandemic of Coronavirus (so called COVID-19), the head of WHO says the most urgent priority is how we talk about the virus so as not to cause offense.

He is worried about the social impact of Coronavirus and the stigmatizing effect of words. He claims the stigma is more dangerous than the virus itself and he has made every effort to underline this point by repeating it… twice.

You know, even with the duplication I am not really getting his point. An unknown killer virus with no known cure that turned a Princess cruise ship into a floating plague hotel and has killed 100 Italians in a week sounds just a bit more dangerous than words right now.

The Director General of WHO is a gentleman named Tedros Adhanom Ghebreyesus, which I think is short for Utter Madman. Rallying around his own rhetoric, he is leading the fight for unity in the media and online, retweeting a tweet from Twitter that says: “Take care of each other.”

If this is what leadership of an international health organization looks like, the world is a sicker place than I thought. And I say that having watched Joe Biden sniffing the heads of baby girls.

We must not talk about people transmitting the virus, or infecting others, or spreading the virus, as this implies intentional infection and assigns blame.

Instead, he says, we must talk about people acquiring or contracting COVID-19, just as one might acquire a new job or shares in Tesla.

(Mr Ghebreyesus has clearly never met my mother. When struck down with so much as a sore throat she is very clear about whom she caught it from and what bus she was on at the time, swearing vengeance will be hers.)

Image above: this is an actual tweet from the World Health Organization.

The WHO, meanwhile, has provided a handy five-page document on the subject of social stigma associated with COVID-19 and how to prevent and address it (the stigma, not the virus). It provides some DOs and DON’Ts on how to talk about this disease.

DO talk about Coronavirus disease.

DON’T attach locations or ethnicity to the disease. This is not Wuhan Disease. Or Asian flu.

This is more problematic in the UK where the BBC has been so desperate not to identify a group of pedophiles as majority Pakistani Muslims that it uses the term Asian instead. We are now in significant danger of getting our Asians muddled up.

DO talk about people who may have COVID-19 or people who are presumptive for COVID-19.

I can see why making a flu-victim sound like a criminal is problematic but I do worry that in the time it takes a doctor to utter the phrase “person who is presumptive for COVID-19,” another 24 people will have become infected.

DO talk about people who have died after contracting COVID-19.

Forgive me for butting in again, but if I am wiped-out by a mega-virus that kills me within days of being sneezed on by someone from Wuhan, I really won’t care what you call me. You can call me a horse-faced old weasel. Or an almighty pain in the buttocks. I will be dead and my feelings are unlikely to be hurt. If anything, I will have been the victim of an international organization too afraid of its own shadow to be honest about the magnitude of the problems we face.

DO talk positively and emphasize the effectiveness of prevention and treatment measures.

DON’T emphasize or dwell on the negative.

I don’t wish to be contrary, but it is hard to be super upbeat about a disease that has seen half of Wuhan exit their apartments in body-bags, and honest reporters from the original outbreak clubbed over the back of the head by the Communist regime, never to be seen or heard from again.

Do we really need a lecture in using inclusive language when, arguably, the plague is about as inclusive as you can get? With Coronavirus, one sneeze from a fellow traveler can have you collapsing face-first into the underwear section in Target. An incurable virus is about as inclusive as Bernie Saunders in a Sanctuary City (and there is no cure for Democrats either).

However, the head of the World Health Organization has asked us to be positive and upbeat about Coronavirus, and to emphasize the positives of the situation. So here goes:

Governments are now advising people on basic hygiene such as washing your hands for 20 seconds after using the bathroom and not sneezing directly into the faces of strangers. This can only be a good thing. Far too many people have been far too disgusting for far too long.

People are too scared to turn up for flights because the thought of sharing an air supply with 400 other people in a metal tube for 12 hours is off-putting during a time of plague. This is great news for sane people such as myself who will keep traveling regardless and may now get to enjoy their own armrest or their first choice of meal.

3) Chinese restaurants and take-aways are less popular than before

Given this is National Obesity Week and 50% of British kids are obese or at least very chubby, any reduction in the nation’s fast food intake can only be a positive thing.

4) The God delusion is being challenged

Young people are convinced that they are the Masters of the Universe because they can use an iPhone and are on Instagram. An incurable plague may be the only thing capable of testing their thinking or at least getting them to look up.

The surge of globalism that swept across Western democracies decried the need for borders or nations. Globalists wanted us to subscribe to the idea that all barriers to the free movement of people should be removed. Coronavirus has reversed this thinking. Citizens are calling for flights to be grounded, cities to be locked down, countries to be isolated, and borders to be patrolled. Suddenly, great patriots like Trump and my good self are looking like the smart ones in the room.

The World Health Organization says stigma is the most dangerous enemy we face. I am here to remind you that it is AOC-levels of stupidity that will see these leftist lizards eat their own tails.