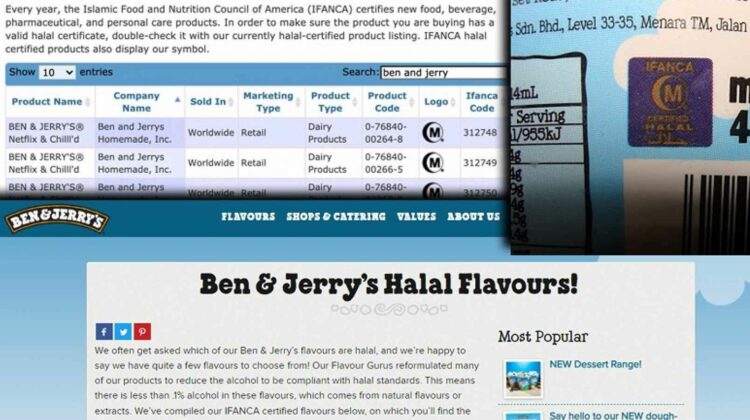 Joe Kaufman is a Shillman Journalism Fellow at the David Horowitz Freedom Center and the Chairman of the Joe Kaufman Security Initiative. He was the 2014, 2016 and 2018 Republican Nominee for U.S. House of Representatives (Florida-CD23).

Ben & Jerry’s has recently come under fire for its decision to remove its ice cream products from sale and production in Jewish communities within East Jerusalem and Judea and Samaria (the West Bank), what the company considers “Israeli occupied territories.” The action has been labeled “anti-Semitic” by the Israeli government and others. Some have even accused Ben & Jerry’s of helping terrorists. The company denies the charges, but what it cannot deny is the fact that it does business with a Muslim food group, IFANCA, that is linked to terror and bigotry, itself. Maybe it is time for Ben & Jerry’s to close up shop not only in Israel, but everywhere.

This past July, Unilever, the parent company of Ben & Jerry’s, issued a statement that Ben & Jerry’s would be leaving Jewish “settlements” but would still operate in other parts of Israel. This irked Ben & Jerry’s board of directors, which seems to want to drop Israel completely. According to NBC News, the Chair of Ben & Jerry’s board, Anuradha Mittal, an anti-Israel activist, claims “Unilever released a statement about the decision without the approval of the board… [T]he board approved a different statement, which made no reference to continued sales in Israel… [F]or the board, this is a sign that Unilever is trying to destroy the soul of Ben & Jerry’s.”

Regardless of what percentage of Israel was affected by Unilever and/or Ben & Jerry’s decision, legal battles at home were likely, as their action falls clearly within anti-BDS legislation passed by tens of states. In much of the US, there is zero distinction made between Israel and what some deceitfully label “occupied Palestinian territories.” Given this, the companies’ decision could be, as well, criticized for being “anti-Semitic,” as Israel’s Foreign Minister Yair Lapid and others have labeled it, for the plain reason that the BDS movement singles out Israel for attack. Whether they like BDS or not, their action appears to be straight out of the BDS playbook.

Another accusation made against Ben & Jerry’s is that its cancellation of sales in Israel helps terrorists by delegitimizing the Jewish state and emboldening its attackers. While this is harder to prove than the charge of anti-Semitism, Ben & Jerry’s is already linked to support for terror, and it is located directly on the ice cream’s containers.

IFANCA or the Islamic Food and Nutrition Council of America is a non-profit organization, established in 1982, that provides certification of food and other products for Muslims (Halal). From baby formula to Girl Scout cookies, one can discover IFANCA’s Crescent-M symbol on a wide assortment of packed foods and beverages. And although the packaging seems innocuous, the organization and its leadership have disturbing ties to extremism and bigotry.

One of IFANCA’s founders, Ahmad Sakr, was a longtime IFANCA board member, and past Chairman of the group’s Religious Advisory Council. Sakr was affiliated with a number of radical Muslim groups. He was one of the founders and President of the Muslim Students Association (MSA), he was the first Director of the Muslim World League (MWL), and he served as an officer and was on the board of the North American Islamic Trust (NAIT). Sakr authored a book titled, ‘Pork: Possible Reasons for its Prohibition,’ in which he describes Jews as being “cursed,” “monkey-like,” “filthy,” “corrupt,” and “swine.”

Roger Othman is the Editor-in-Chief of IFANCA’s quarterly magazine, Halal Consumer. He has served on the IFANCA Board of Directors, and he was the first Managing Director of IFANCA. Othman has also served on the board of the Bridgeview, Illinois Mosque Foundation (MF) and its Executive Committee. MF has been a haven for Palestinian terror-related activity, holding fundraisers for those associated with Palestinian Islamic Jihad (PIJ) and Hamas. According to the FBI, one of Othman’s fellow MF Executive Committee alumni, Muhammad Salah, a now deceased former “specially designated terrorist,” recruited and trained members of Hamas.

A recent investigation conducted by the Middle East Forum (MEF) reveals that IFANCA has doled out massive amounts of money, totaling in the hundreds of thousands, to various radical Muslim outfits. This includes divisions of the Islamic Circle of North America (ICNA), a group related to South Asian terror that has spent 30-plus years harboring a convicted death squad leader; Islamic Relief (IR), an organization that has been banned by a number of nations; and the Council on American-Islamic Relations (CAIR), which was founded by Hamas operatives and which has been named by the US government a co-conspirator in the financing of Hamas.

Another entity that IFANCA has provided funds to is the Council of Islamic Organizations of Greater Chicago (CIOGC), an umbrella group for many Chicago-area Islamist groups, including ICNA, Islamic Relief, the Mosque Foundation, and yet one more group linked to Hamas, American Muslims for Palestine (AMP). According to MEF, CIOGC has received over $41,000 from IFANCA, and IFANCA itself is a CIOGC member.

When most people purchase their food, they are unsuspecting of any terror-related associations that the food may possess. In the case of those products certified by IFANCA, it is a dangerous reality.

According to IFANCA’s official website, Ben & Jerry’s has 112 IFANCA-certified products, and Ben & Jerry’s proudly devotes a page, on its own website, to the IFANCA certification on some of its most popular ice cream selections, titled “Ben & Jerry’s Halal Flavours!”

Ben & Jerry’s is notorious for its financial and ideological backing of radical left causes. Its decision to halt sales in Israel, in compliance with BDS, is but one example. Its partnership with IFANCA is yet another reason for those who support Israel and shun extremism to choose another brand. In Ben & Jerry’s world, even something as harmless as ice cream becomes a political weapon.

Joe Kaufman is a Shillman Fellow at the David Horowitz Freedom Center, and the Chairman of the Joe Kaufman Security Initiative. He was a 2014, 2016, and 2018 Republican nominee for the U.S. House of Representatives (Florida-CD23).