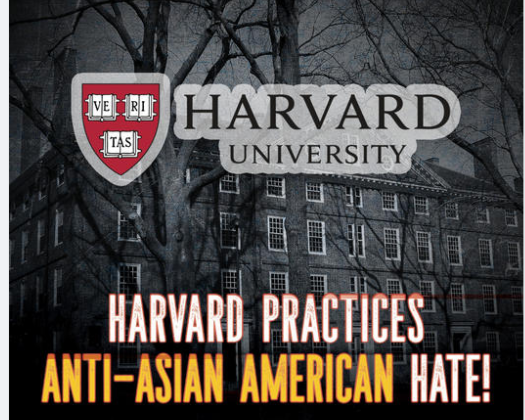 A cutting-edge social media campaign conducted in April and May by the David Horowitz Freedom Center targeted and exposed the racist and segregationist actions and programming of prestigious colleges and universities taken under the guise of “anti-racism” and Critical Race Theory. Ten prestigious institutions of higher education including Harvard University, the University of Southern California, Georgetown University, and the University of Minnesota were outed for their racist leanings and decisions.

The universities targeted by the Freedom Center’s campaign were included among the “Most Racist” for varied reasons, but the unifying theme was their allegiance to the new philosophy of Critical Race Theory (CRT), a radical revision of the Rev. Dr. Martin Luther King, Jr.’s dream that each American be judged “not by the color of their skin but by the content of their character.” While Dr. King and the leaders of the Civil Rights Movement of the 1960’s promoted “colorblindness,” CRT pushes the opposite view, that our character and our place in society is predetermined by our skin color.

As Manhattan Institute senior fellow Christopher Rufo explained recently in an interview with The Atlantic, “Critical race theorists believe that American institutions, such as the Constitution and legal system, preach freedom and equality, but are mere ‘camouflages’ for naked racial domination. They believe that racism is a constant, universal condition: it simply becomes more subtle, sophisticated, and insidious over the course of history. In simple terms, critical race theory reformulates the old Marxist dichotomy of oppressor and oppressed, replacing the class categories of bourgeoisie and proletariat with the identity categories of White and Black. But the basic conclusions are the same: in order to liberate man, society must be fundamentally transformed through moral, economic, and political revolution.”

Guided by this ahistorical revolutionary subtext, America’s colleges and universities have increasingly promoted racially-segregated classes and “anti-racist” training programs which actually endorse racist tropes and promote racial conflict.  To combat this return to Jim Crow, the Freedom Center published a report and created a new website, TopTenRacistUniversities.org, exposing the Top Ten Most Racist Colleges and Universities in America. The social media campaign served to highlight this report and its conclusions and bring them to a wider audience.

Harvard University, #1 on the Freedom Center’s list of most racist universities, was sued for blatant discrimination against Asian applicants in spite of their superior academic achievements, made possible by characterizing their personalities as “lacking” and “one dimensional.”

Smith College, #2 on the Freedom Center’s list, delivered an elaborate apology to a black student who alleged racism at the hands of Smith employees. Even after the student’s narrative was proven by an independent investigation to be both malicious and false, Smith used it as an opportunity to force its white, working-class employees to undergo mandatory “anti-racism” training and attend “White accountability” sessions. The lying student received no punishment.

The University of Southern California, #3 on the list, suspended a linguistics professor from teaching a class after he used an example of a Chinese phrase that phonetically resembles the N-word.

Georgetown University, #4 on the list, immediately fired one professor and disciplined another because they dared to discuss and lament the poor academic performance of African-American law students—an actual anti-racist sentiment.

The University of Pittsburgh made the list at #5 for forcing all incoming freshmen to take a mandatory class in “Anti-Black Racism” which teaches that “color blindness” and “the myth of meritocracy” amount to microaggressions.

The University of Central Florida clocked in at #6 for conducting a witch-hunt and firing a tenured professor after he made posts on social media questioning the existence of “systemic racism” and mocking the concept of “white privilege.”

The University of Minnesota was named to the list at #7 for conducting an online class titled “Recovery from White Conditioning” which presented a “12-step program” to make white students aware of their innate “white supremacy.”

Cornell University made the list at #8 for offering a throwback to the Jim Crow-era—a racially-segregated physical education class titled “BIPOC Rock Climbing” which barred white students from entry.

Elon University earned the #9 spot on the list for urging “white-identifying” students to join a weekly “White Caucus” Zoom meeting. “White caucuses allow white-identfying [sic] allies to have these conversations in a way that does not burden or re-traumatize people of color,” an email from the university explained.

Finally, Brandeis University earned the #10 spot on the list for racially segregating students in discussions about racism. Brandeis officials attempted to justify this segregation by claiming it was an issue of safety not to allow whites and blacks to converse about racial issues until the white students have been sufficiently shamed for their innate racism.

Using eye-catching graphics and memes, the Freedom Center’s social media campaign was able to place direct evidence of these racist outrages directly into the Facebook and Instagram feeds of students, alumni, and fellow educators from each university. Reaction was swift and condemnatory.

“As a graduate of this school, I find this very disturbing,” one Elon alum commented on the social media postings targeting his alma mater. “I need more information regarding this unacceptable issue before making contribution decisions.”  His comment was “liked” by 24 others.

“This is why I will not send them a penny,” declared a Brandeis alum from the class of 1971.

“They should never [have] fired that professor,” an alum of the University of Central Florida commented on the Freedom Center’s report. “UCF has turned into a garbage pit that continues to embarrass me.”

“I’ve been ashamed of Pitt since the Buckley incidents,” an alum of the University of Pittsburgh commented. “I stopped contributing long ago and this incident confirms I made the right decision. Sad.”

“I taught Legal Research and Writing at Georgetown in ’90 and I can tell you I struggled with minority students who could barely write sentences, let alone a legal brief,” commented a former instructor in defense of the Georgetown professor who was fired for commenting on the poor performance of African-American students. “I wanted to fail a couple of students but that is ‘just not done’ for the most part at Georgetown University Law Center. The racist accusation is crazy. If anything is crazy, it’s letting in unqualified students to meet a quota.”

During the six-week social media campaign, the Freedom Center’s ads exposing racist colleges and universities reached over 377,000 individuals across all 10 targeted campuses and garnered over 1.3 million total impressions, 20,000 clicks to view the full report on the TopTenRacistUniversities.org website, and 400,000 viewings of the accompanying videos hosted on YouTube. This is an incredible reach for a campaign of this size and scope and successfully exposed the radical manifestations of Critical Race Theory in our universities to large numbers of current students and alumni. A follow-up campaign encouraged alumni to sign letters protesting these outrages to the president or chancellor of each university, and remains live on the campaign website.

“Diversity Training programs are not about racial sensitivity,” explained Freedom Center founder David Horowitz. “They are about the demonization of white people and the constitutional order of individual freedom, equality and accountability the American Founders created. These campuses are openly promoting racism in the name of ‘social justice.’”

Images of some of the Freedom Center’s Facebook ads targeting the Top Ten Most Racist Colleges & Universities may be viewed below. 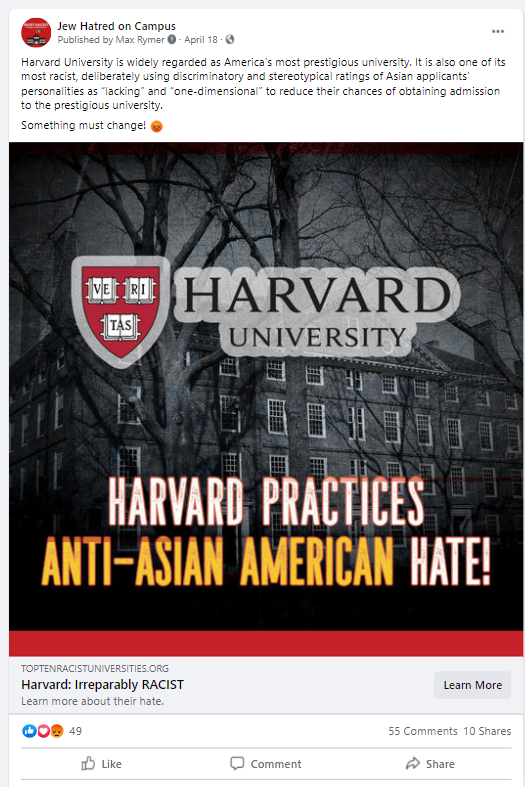 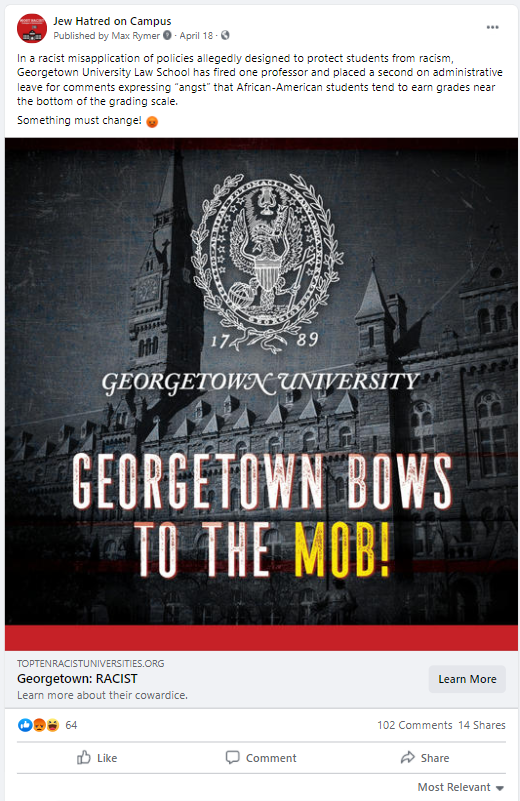 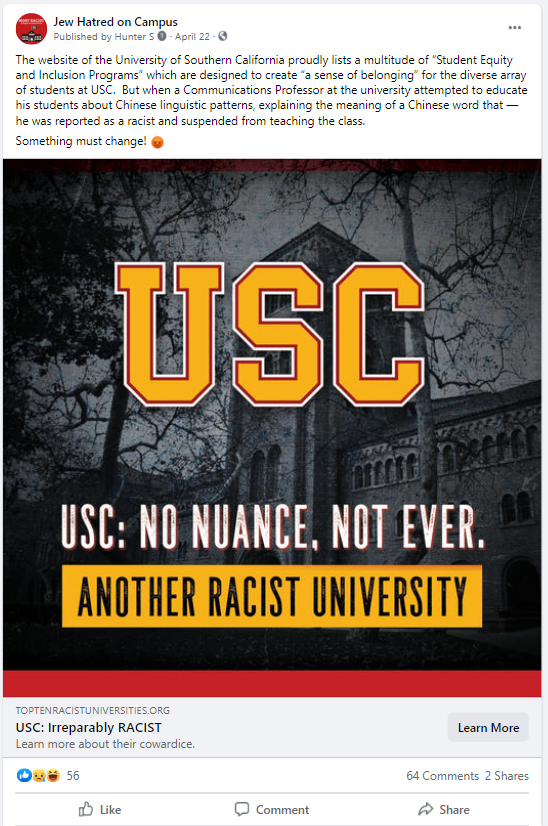 Being VP isn’t hard. Just try not to say anything stupid.