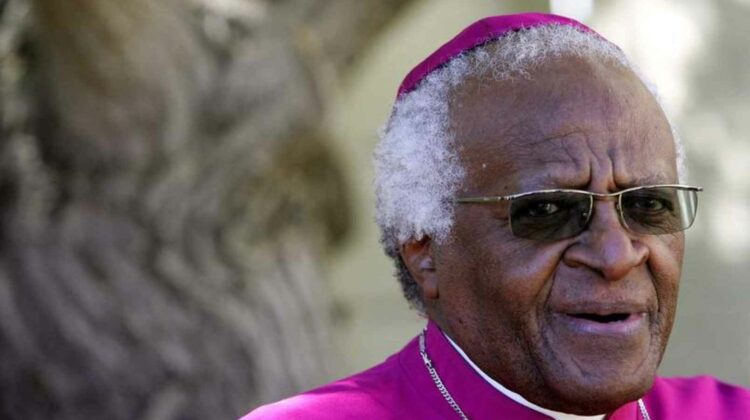 Years ago, a big poster of Desmond Tutu, who died on December 26, adorned the living-room wall of my apartment in New York. That was the doing of my then partner, C. He revered Tutu. For several years during our relationship, both of us were active in the Episcopal diocese of New York, but C. was far more active than I was. For a time, he was an employee of Trinity Church Wall Street, and during a long stretch of that period he worked as a verger at St. Paul’s Chapel, where George Washington had worshipped on his Inauguration Day. C. was the first person to arrive at the chapel every morning and the last to leave at night, and he carried with him everywhere a chain of impressively large keys with which to unlock the massive old chapel doors and the huge iron gate opening onto Broadway. He was proud to hold such a responsible position.

But few things made C. prouder than the opportunities he had, as a busy bee banging around the diocese, to meet Desmond Tutu. Tutu – a leading figure in the Anglican Church of Southern Africa, which like the Episcopal Church in the U.S. is part of the worldwide Anglican Communion – was a hero, for C. as for millions of others. He’d boldly stood up to apartheid, calling for a total boycott of his native South Africa and opposing President Reagan’s policy of “constructive engagement.” In 1984 he won the Nobel Peace Prize. The support, financial and otherwise, for his anti-apartheid campaign came largely from the U.S. and Britain, and in particular from the Episcopal Church in the U.S. and the Anglican Church in Britain. Accordingly, Tutu, who was named Bishop of Johannesburg in 1985 and Archbishop of Cape Town the next year, was often in New York, schmoozing with the money boys at the Episcopal Church Center on Second Avenue.

Apartheid collapsed in the early 1990s. But Tutu didn’t disappear. When the long-imprisoned revolutionary icon Nelson Mandela became president of South Africa in 1994, his government set up a Truth and Reconciliation Commission at Tutu’s urging and under Tutu’s chairmanship. The idea was to bring closure to the nation by reconciling whites and blacks, oppressors and oppressed. Not all of the malefactors, however, were caucacian. One of the most appalling offenders of the entire apartheid era, indeed, was Winnie Mandela, whom Nelson divorced in 1996. Now, you can argue about whether Nelson did more good than harm, but there’s no room for doubt or ambiguity when it comes to Winnie, who is often called the “mother of the nation.” She was a monster. And Tutu loved her.

After Winnie’s death in 2018, a South African newspaper would praise her as “a fearless fighter for justice and a feminist icon” but also felt obliged to acknowledge that she’d been “a violent egomaniac” who in the apartheid era had overseen a “reign of terror.” Yes, all revolutions involve violence, but Winnie – who headed up a so-called “football club” consisting of young thugs who were, essentially, ruthless hit men – was bloodthirsty by nature. Like Stalin, she murdered without remorse not only her enemies but her allies. Among the atrocities for which she was responsible were organized gang rapes of young girls and acts of “necklacing,” whereby one executed victims by placing car tires filled with gasoline around their necks and then setting the tires on fire.

Anyway, after apartheid was over and Nelson was president, Winnie was brought before the Truth and Reconciliation Commission to answer for the cruel murder, under her direction, of two innocent anti-apartheid activists, a 14-year-old boy named Stompie Seipel and a Soweto doctor named Abu Asvat. At the commission hearing, Tutu told her:

To everyone’s surprise, Winnie apologized – sort of. “Things went horribly wrong,” she confessed. And she walked. And that was that. Afterwards, many hard-line black South Africans reviled Tutu for having forced this quasi-confession out of their beloved Winnie. I wasn’t alone, however, in being disgusted by Tutu for gushing over this murderous beast and acting as if a grudging apology from her would make everything OK again.

Tutu’s glow faded even more for me after 9/11. Of course he lamented the attacks on the Twin Towers and the Pentagon – how could he do otherwise, given all the checks he’d received, drawn on New York banks? – but he sounded far more emotionally worked up when he condemned the subsequent acts of retaliation by NATO. Indeed, while he soft-pedaled his criticism of Islamic terrorists – and stubbornly refused to criticize Islam itself, asserting in 2006 that “no religion is inherently violent or encourages violence” and that people of one faith “mustn’t despise, disparage or speak ill of another faith” – he savaged George W. Bush and Tony Blair, both of whom, he maintained, should be tried for war crimes in The Hague. (No Truth and Reconciliation Commission, apparently, for them.)

And although he’d publicly proclaimed his love for Winnie Mandela, Tutu refused to sit down with Blair at a 2012 conference, lecturing the prime minister afterwards in a Guardian op-ed: “You are a member of our family, God’s family. You are made for goodness, for honesty, for morality, for love; so are our brothers and sisters in Iraq, in the U.S., in Syria, in Israel and Iran.” Pondering this op-ed in Canada’s National Post, a writer named Wayne K. Spear rightly dismissed it as so much “greasy pontification,” pointing out that

Whether or not our brothers and sisters were “made for goodness,” some of them are committed to the destruction of apostate and infidel. Saddam Hussein seems to have been made, like the communist Russian dictator he both admired and emulated, for engendering terror among his rivals. As long as our world produces people such as these, leaders must from time to time have recourse to the necessary evil of war.

By this point, for me, the bloom was definitely off Tutu’s rose. But I didn’t fully grasp the scale of his awfulness until he started speaking up frequently about the Israeli-Palestinian conflict. His sympathies, he made clear, were entirely with Yasser Arafat and company. He compared Israel to Nazi Germany. He used his clout to get the University of Johannesburg to sever its ties with its Israeli fellows. But he wasn’t just critical of Israel. He criticized Jews. In fact, it became pretty apparent that he hated Jews. In a 2011 article, Alan Dershowitz offered a brief summing-up of Tutu’s comments on the subject:

He has called the Jews “a peculiar people” and has accused “the Jews” of causing many of the world’s problems….He has said that “the Jews thought they had a monopoly of God: Jesus was angry that they could shut out other human beings.” He has said that Jews have been “fighting against” and being “opposed to” his God. He has “compared the features of the ancient Holy Temple in Jerusalem to the features of the apartheid system in South Africa.” He has complained that “the Jewish people with their traditions, religion and long history of persecution sometimes appear to have caused a refugee problem among others.” Tutu has minimized the suffering of those murdered in the Holocaust by asserting that “the gas chambers” made for “a neater death” than did apartheid. He has demanded that its victims must “forgive the Nazis for the Holocaust,” while refusing to forgive the “Jewish people” for “persecute[ing] others.”

In 2014, Jay Nordlinger, author of the definitive book about the Nobel Peace Prize, suggested that of all its winners, the “most harmful…is Desmond Tutu: because he is a South African hero who, for decades, has peddled the lie that Israel is an ‘apartheid state.’ Coming from him, it is more harmful than from (the countless) others.” And in 2008 a staff writer for the Weekly Standard described Tutu as “our least favorite prince of the church” – for although he’d been “a principled opponent of apartheid in South Africa,” he seemed uninterested in “freedom anywhere else in the world.” Moreover, while Tutu was virtually mum about the depredations of the Taliban, Saddam Hussein, and other evildoers, he made a habit of singling out the United States for obloquy.

That old poster of Tutu came down from the wall of my apartment in New York a long time ago. I’ve moved over a half-dozen times since, but I still have it. I kept it for the frame. After I learned of his death, I spent a half hour poking around in search of it. I finally found it, covered in dust, behind a piece of furniture. Someday we will all be free, it reads. That day has come. Please vote. The poster, I see, is a product of Project Vote, headquartered in Cape Town; online I was able to confirm that it was produced in 1994 for the election that resulted in Nelson Mandela’s historic ascent to the South African presidency. Who could have imagined back then that Tutu would end up being viewed by many former fans mainly as a loathsome bigot and apologist for terror?

One last thing. Toward the end of my years with my ex-partner, even he started to sour on Tutu. It began when he met Tutu’s kids. I see on Wikipedia that Tutu had four offspring. C. met two or maybe three of them, if I recall correctly. He came home from work that day with a look of shock and disillusion in his eyes. Tutu’s kids, he told me in a tone of astonishment, were among the most spoiled brats he’d ever encountered. (That’s saying something when you live in Manhattan.) At the time, note well, these brats were adults. According to C., they acted as if they were rock stars and talked to him and his colleagues at Trinity Church as if they were serfs. How, C. wondered, could a man whom he regarded at that point as a veritable saint be a father to such obnoxious creeps? Perhaps it’s a blessing to C. that he didn’t live to see his idol crumble so thoroughly. Then again, as a student of scripture, and, I daresay, a far more commendable Christian than Desmond Tutu, he knew very well that “there are last which shall be first, and there are first which shall be last.”