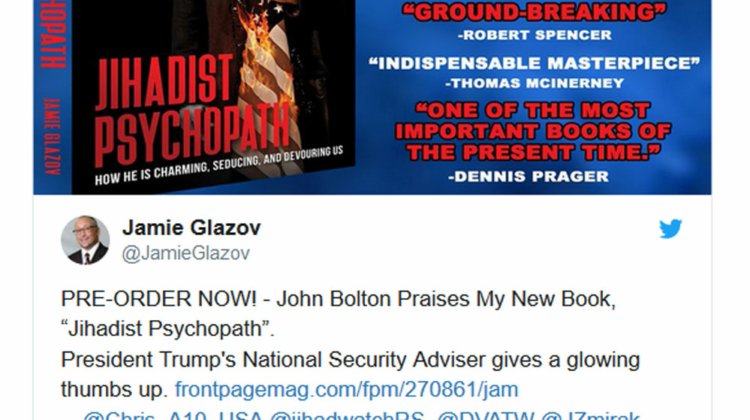 Reprinted from The American Mirror.

Twitter is warning it may censor content by Western users that the social media giant deems a violation of Pakistan law.

“Ladies and gentlemen, a very interesting world we’re entering now. Twitter has recently warned me that a post on my new book, ‘Jihadist Psychopath: How He Is Charming, Seducing, and Devouring Us,’ is in violation of a section of Pakistan’s penal code connected to Islamic blasphemy law,” Glazov said.

“Now Twitter told me it has not taken any action, for now. Phew,” he said. “They’re only writing to inform me, for now.”

Glazov explained that the alleged violations carry a potential sentence of life in prison or death, and he joked about canceling his book tour and planned vacation to the Middle Eastern country. Glazov also put the situation into broader perspective.

“We’ve got an emergency situation on our hands, my friends,” he said. “Twitter, and as we know along with other social media venues, is now fully on board with forcing Sharia compliance. Why is Twitter even writing me about this and what Pakistan thinks and says about Islamic blasphemy laws?”

“ … Ya, heroes and civil rights and human rights activists like Tommy Robinson, Laura Loomer and Anne Marie Waters, and all these freedom fighters who want to protect people from Sharia and jihad, are banned from Twitter,” Glazov continued, “and Hezbollah and Hamas are still on Twitter.

“So I think we can kind of guess what is going on,” he said.

The Twitter warning is a fitting example of radical Islam infiltrating western culture and values – the subject of “Jihadist Psychopath.”

“Every element of the formula by which a psychopath subjugates his victim, the Islamic Supremacist likewise uses to ensnare and subjugate non-Muslims,” the description reads. “And in the same way that the victim of the psychopath is complicit in his own destruction, Western civilization is now embracing and enabling its own conquest and consumption.”

The book breaks down how radical Islamists seduce and recruit others to carry out terrorist attacks, and Glazov posted a message about pre orders for “Jihadist Psychopath” that included an image of the book and glowing praise from several well-known figures, including Trump National Security Advisor John Bolton.

He initially tweeted about the book on Aug. 31, but wasn’t warned by “Twitter Legal” until Dec. 22.

The correspondence claims that the following content is in violation of Pakistan law: Section 37 of PECA-2016, Section 295 B and Section 295 C of the Pakistan penal code,” the email from “Twitter Legal” read.

“Twitter has not taken any action on the reported content at this time. We are only writing to inform you that content posted to your account has been mentioned in a complaint. This notice is not legal advice. You may wish to consult legal counsel about this matter. If you believe we have contacted you in error, please let us know by replying to this email.”

The email raises a lot of questions, Glazov said.

“Now that Twitter is relaying the messages to me and to other people about how we’re violating Pakistani Islamic blasphemy laws and they’re waring us, will Twitter soon also be assigning its employees to carry out the punishments that are suggest, authorized and enforced by the authorities in Pakistan, in terms of the blasphemy laws?” he questioned.

“My book, ‘Jihadist Psychopath’ is exactly about why Twitter is warning me … because my book deals with our surrender and why the west is surrendering and how the left is complicit in our surrender, how the left is enabling Islamic Supremacism, and how its persecuting the freedom fighters who are trying to stand up for our civilization,” Glazov said.