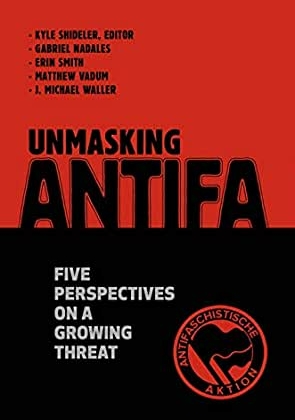 The other day on Facebook a friend posted something critical of the domestic terror group known as Antifa, and someone came to its defense by echoing Clueless Joe Biden’s recent, bizarre declaration that Antifa is not an organization but “an idea.”

It is true that Antifa is not an organization in the strict sense, but Biden’s vague description is either stunningly uninformed or a weak attempt to deflect criticism from its masked militant members. I’m betting on the latter, because Democrat leaders have been curiously reluctant to condemn Antifa’s strategy of violence and intimidation toward the purportedly “fascist” supporters of President Trump.

To educate the Facebook commenter and Biden supporter who believes Antifa actually opposes fascism, I recommended the new book Unmasking Antifa: Five Perspectives on a Growing Threat, edited by the Center for Security Policy and featuring FrontPage Mag contributor Matthew Vadum, because there is no better dissection of the origins, nature, tactics, and aims of this anarchic “idea” and its dangerous adherents than this compact exposé.

As the subtitle suggests, Unmasking Antifa consists of five essays from a variety of experts about the movement that the book’s editor Kyle Shideler calls “a growing threat to the fabric of the American way of life and the inalienable rights of all citizens enshrined in our Constitution.”

First up is Shideler himself, whose testimony before the U.S. Senate Judiciary Committee on the Constitution lays out Antifa’s history and ideology, organization and structure, and network of material support before answering the question, is Antifa a terrorist organization? Shideler concludes that it most certainly is, that “Antifa’s violent attacks against demonstrators, political rally participants, and journalists with the explicit purpose of intimidating and coercing them are clearly terrorism.” He states that the movement’s single-minded purpose is to use violence to “terrorize the general public into silence and inaction” politically. As former professor Mark Bray writes approvingly in Antifa: The Anti-Fascist Handbook, “We may not always be able to change someone’s beliefs, but we sure as hell can make it politically, socially, economically, and sometimes physically costly to articulate them.”

Antifa is not a new movement, Shideler explains, but a reincarnation of the Anti-Fascist Action organization established by the Soviet-controlled German Communist Party in 1932, and rekindled among Europe’s communist urban guerrillas of the 1960s and ‘70s. “The young followers of radicals from [that era] are now among the organizers, funders, leaders of young radicals in 2020,” he writes. “They have worked their entire lives for this moment.”

The next contributor is Gabriel Nadales, a former Antifa-member-turned-conservative-activist who offers a riveting insider perspective in his essay, “Not an Organization, But a Movement.” Antifa is more easily understood, he explains, “not as a noun but as an adjective and a verb.” The adjective applies to a leftist group when it embraces “anti-fascism”; the verb refers to its willingness to promote its ideas with violence – and “you are not truly a part of the Antifa movement unless you take that violent step toward ‘fighting fascism.’”

“Antifa does not stand for anything,” Nadales continues. It “is instead defined by what it stands against,” which is whatever its adherents choose to define as “fascist.” But it “was never about fighting an oppressive ideology. Antifa has always been about fighting to destroy capitalism and establish communism.”

“The Tactics of Antifa” follows, by Northern California GOP activist Erin Smith. Smith echoes many of Shideler’s and Nadales’ points, and adds that “Antifa seeks to directly engage with its political opponents… to make their continued presence impossible. They are not interested in winning a political debate or achieving a legislative objective.” (Conservatives, take heed; we are engaged in a war, not a debate, and Antifa is out to win by any means necessary.) “Their secondary objective,” Smith continues, “is to provoke disproportionate, high-intensity violence from their opponents, which can then be exploited for propaganda purposes.” Thanks to the assistance of the leftist news media, Antifa has “an almost uncontested ability to cast any right-leaning opposition as literal Nazis.”

Smith goes on to describe in fascinating detail Antifa’s organizing units – “affinity groups” and “black blocs” – and their street warfare tactics and training, including with firearms. Not that they have any special reverence for the Second Amendment; as Smith points out, “In their world… you only accrue a right to bear arms if you agree to use them to advance collective class interests and the revolution.”

Investigative reporter Matthew Vadum, a frequent FrontPage Mag contributor, explores “The Murky Money Trail” of Antifa, pointing out that “we know surprisingly little about who fills Antifa’s coffers.” While Antifa’s activities are individually low-budget, “the sheer number and scale of the riots and violent protest actions Antifa was involved in throughout 2020 across the United States makes it difficult for many to believe Antifa militants act without significant financial backing.”

Vadum notes that the movement receives direct funding through sources such as crowdfunding, and indirect funding through support organizations such as the Democratic Socialists of America and especially the National Lawyers Guild, which has been called Antifa’s “unofficial legal arm.” Predictably, the name of billionaire plutocrat activist George Soros comes up, as his Open Society Foundations funds Antifa indirectly.

Finally, J. Michael Waller looks at the international nature of Antifa and its place in the history of violent leftist groups in “Antifa: An International Insurgent Network.” “Antifa has borrowed tactics from Cuban-backed armed clandestine organizations, radical Palestinian groups that waged the Intifada, and Islamist movements ranging from the Muslim Brotherhood to Turkish-backed jihadis,” Waller concludes. Ideologically a hybrid of anarchism and Marxism, it is “of foreign origin, is networked internationally, and is targeted at representative democratic governments and their constitutional foundations.” That sounds like more than just an “idea,” as Biden would put it.

Antifa is not merely an idea any more than it is anti-fascist. It is, as the book’s editor Shideler warns, a subversive and violent extremist international movement… fundamentally committed to the abolition of the U.S. government and the violent overthrow of the United States Constitution.” All patriots need to arm themselves with the clear-eyed truths about the movement that are compiled in Unmasking Antifa. We misunderstand Antifa, or underestimate it, at our nation’s peril.