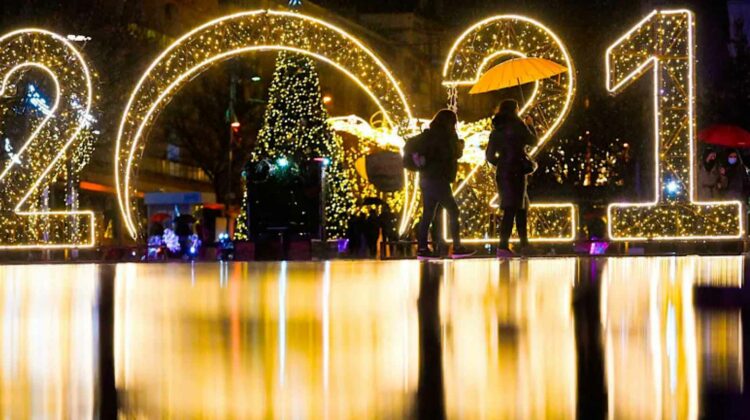 Bruce Thornton is a Shillman Journalism Fellow at the David Horowitz Freedom Center.

In 2021, political, social, and cultural trends that had been developing for decades reached a level of surreal absurdity. Under the stress of the pandemic crisis, we witnessed our alleged “cognitive elites” in government, schools, popular culture, and media saying and doing things that an illiterate peasant in the 18th century would consider the words and deeds of a lunatic. In every dimension of our existence, gross violations of logic and common sense were shamelessly indulged, the lies never acknowledged even when exposed.

The presidency of Donald Trump was the accelerant of these developments. The bipartisan ruling elite found the straight-talking, braggadocios celebrity plutocrat a gross insult to their technocratic pretensions and guild “norms.” The depth of his challenge was especially obvious in the corporate legacy-media, which colluded with the progressive Democrats to inflate preposterous rumors of “collusion” with Russia into existential crises endangering “our democracy.”

Even when two years of a dishonest, corrupt investigation by the special counsel couldn’t provide a scintilla of legitimate evidence to support these charges, the Dems and their media flunkeys simply moved on to the next fabrication. The four-hour mini-riot at the Capitol building on January 6 was similarly inflated into an “insurrection” and assault on the same “temple of democracy” that progressives have been vandalizing for over a century. The House conducted a second dead-end impeachment of Trump, and when that collapsed, shifted to a still-ongoing investigation of the January 6 protests in order to short-circuit our democratic process by preemptively disqualifying Trump from the 2024 election.

The dishonesty, hypocrisy, and sheer cognitive incoherence of the reaction to a president who for all his crude and insulting rhetoric, had one of the most successful first terms of a president in the postwar period––a judgement the validity of which it took “Joe Biden,” the simulacrum of a president, less than a year of failures and disasters to confirm. Inflation, supply-chain bottle-necks, unfilled jobs, hysterical covid protocols, drunken-sailor spending, exploding violent crime, a dishonorable abandonment of Afghanistan, geopolitical adventurism by our rivals and enemies, loss of our energy independence, runaway gasoline prices, and schools blatantly indoctrinating students with transgender and literally racist propaganda––all are the wages of the Trumpophobia epidemic.

Perhaps nothing better illustrates the peculiar stupidity of modern progressives than Critical Race Theory, a snazzy moniker for old-school racist drivel. Claiming that all “white” people–– regardless of their numerous and diverse ethnic origins and socio-economic status–– are without exception “racist” and “privileged” by “systemic racism” is as morally idiotic and stupid as the “scientific racism” that a century ago justified legal segregation.

Yet the success of intimidating and blackmailing our institutions into accepting and promoting these illiberal ideas has led to embedding racism more deeply into the culture. Superficial physical characteristics, especially crude signifiers of color like “black” or “white,” now are being used to privilege, literally and concretely, some groups and to exclude others. The segregation outlawed by the Civil Rights Act and the 14th Amendment is, for now, legal again.

So over the past year we’ve seen the accelerating abandonment of equal opportunity, and its replacement with a coerced equality of outcome. Grammar and high schools, for example, are increasingly offering services, programs, and courses forbidden to “white” students. Worse are the so-called elite universities, for the nonsense taught there ultimately trickles down into K-12 education. So Harvard, the temple of “Veritas et Lux,” is ditching merit-based admissions in order to achieve a superficial, cosmetic “diversity,” the Danegeld our institutions pay to the race-industry Vikings ever ready to plunder and sack businesses, institutions, and reputations that resist their illiberal, self-aggrandizing strictures and orthodoxies.

A close second to Critical Race Theory in the stupidity sweepstakes is “Climate Change,” or more honestly, Anthropogenic Catastrophic Global Warming. In 2021 we saw the UN’s 26th “Conference of Parties,” the globalist confab about how to mitigate the alleged catastrophic warming threatening the planet. This century-old hypothesis that humans’ dumping CO2 into the atmosphere will destroy the planet hasn’t fared so well lately given its serial failures of prediction, and its dubious computer models that plug the holes in empirical evidence that result from our ignorance of how an intricately complex global climate functions over time.

But there’s an obvious fact about proposals to mitigate ACGW that bespeak the stupidity of true believers, and the machinations of green hustlers: even if every program and policy for slowing warming were implemented, global temperatures would not be reduced sufficiently to avoid the alleged catastrophe, because big emitters like China and India are not going to play along. China alone emits twice as much greenhouse gases as the U.S, and more than all the developed nations combined. And if the threat is so dire and imminent, why wouldn’t the climate-change Chicken Littles support clean, renewable nuclear power-plants, or push for replacing coal-fired plants with ones fueled by cleaner, abundant natural gas?

This brings us to the causes of these obviously incoherent ideas, ideologies, and policies they promote. Stupidity, of course, is always a factor in bad folly. In the past, a lack of higher intelligence was offset by common sense and practical wisdom, the intelligence most critical for living together, surviving, and flourishing. Our modern world and its technologies, however,have made it possible for people in daily life to survive without practical intelligence.

But we have mistaken that technical expertise for the wisdom about human nature that comes from tradition, experience, and common sense. We look instead to “experts” who are skilled in narrow professions and disciplines, and give them the authority to speak more broadly about human nature and society, subjects that are not amenable to scientific protocols for discovering truth.

This mistake is our age’s peculiar “stupidity.” Indeed, for two years, we’ve seen this phenomenon in the contradictory, shifting, downright absurd “mandates” and protocols federal and state governments have imposed on sovereign citizens, at an exorbitant cost to our well-being, children’s education, quality of life, and economic development.

The other cause is the pursuit of power and wealth that justifies anything, no matter how preposterous, that serves a faction’s self-interests and ambitions. The attacks on Trump were about weakening him and his administration before the 2020 elections so the progressive Dems could take power and advance their ideological agenda. Critical Race Theory enriches those who promote it by writing bestsellers and providing, like the Attorney General’s son-in-law, curricula and other training materials sold to schools, corporations, and government agencies. “Climate Change” has for decades been a global grift, transferring billions in taxpayer money to climate researchers, “clean energy” companies, electric vehicle and solar panel manufacturers, globalist foundations and NGOs, legions of government bureaucrats, and battalions of consultant and lobbyists.

Finally, there’s the stupidity of the true believer for whom these ideologies are the doctrines, and the policies the sacraments, of a cult. Climate-change maenad Greta Thunberg is merely the most hysterically flamboyant of such people who, like Holly Golightly, actually believe all the crap they believe. They are the shrill “Karens” scolding the maskless or condemning the unvaxed as heretics wantonly endangering everybody. They are the embodiment of the eternal human flaw of  self-righteousness and condemning those they deem sinners.

Whatever the causes or the varieties of stupidity, this year we’ve seen it dominate the culture. Will we see the policies of stupidity implode like most episodes of mass delusion, and common sensereturn to our culture, schools, and politics? Or will this stupidity and the policies it spawns continue until our country is fundamentally transformed, and our unalienable rights and political freedom further weakened?

November 8, 2022 will be the day those questions are answered.

Bruce S. Thornton is a Shillman Journalism Fellow at the David Horowitz Freedom Center, an emeritus professor of classics and humanities at California State University, Fresno, and a research fellow at the Hoover Institution. His latest book is Democracy’s Dangers and Discontents: The Tyranny of the Majority from the Greeks to Obama.