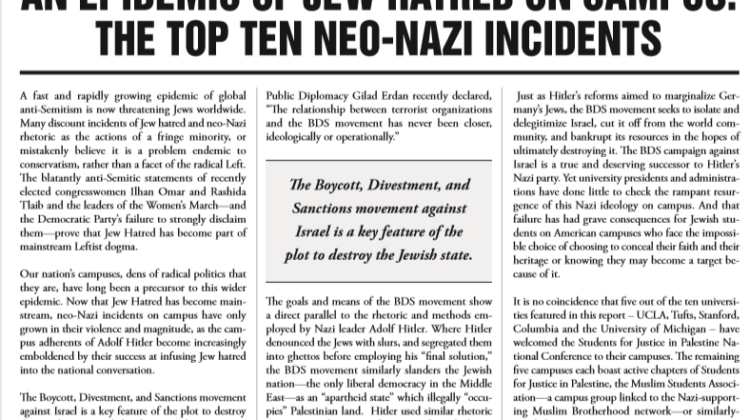 In a stealth campaign to reach students directly, the David Horowitz Freedom Center has secretly distributed 1000 copies of a newspaper containing its new report on the rising tide of Jew Hatred and its links to the Boycott, Divestment and Sanctions (BDS) movement against Israel on select campuses named in the report.

Titled “An Epidemic of Jew Hatred on Campus: the Top Ten Neo-Nazi Incidents,” the Freedom Center’s report chronicles horrifying instances of anti-Semitism on prestigious American campuses including UCLA, Columbia University, the University of Nevada-Reno, Tufts University, UC-Santa Cruz, and the University of Minnesota.

Printed newspapers, individualized for each campus, were then placed in public locations such as student centers, dining halls, classroom buildings and elsewhere where students would encounter them. So far the Freedom Center has targeted UCLA, the University of Nevada-Reno, and the University of Minnesota with the campaign and has plans to distribute papers at additional schools. The campaign has already garnered press coverage in Nevada and we expect more to follow.

The report’s introduction stresses the role that the terrorist-funded BDS movement plays in promoting anti-Semitism on campus and draws parallels between BDS and the rhetoric and methods employed by Nazi leader Adolf Hitler.

The report explains that Jew Hatred—a prejudice often attributed by the media to conservatives— is rapidly becoming part of mainstream Leftist dogma. This is nowhere more true than on our nation’s college campuses, where neo-Nazi incidents have only grown in their violence and magnitude.

University campuses have become notorious for censoring speech that contradicts the leftist narratives that predominate in the ivory tower, forcing the Freedom Center to explore more daring tactics to publicize the contents of its report.

“Just as Hitler’s reforms aimed to marginalize Germany’s Jews, the BDS movement seeks to isolate and delegitimize Israel, cut it off from the world community, and bankrupt its resources in the hopes of ultimately destroying it,” explains the report.

A separate poster included in the pages of each newspaper also highlights the links between BDS and the Nazis. “Boycott, Divestment and Sanctions Against Israel: Echoing Hitler’s ‘Final Solution’ to the Jewish Problem,” states the poster. It features an image of the Palestinian flag with swastikas on each side, and is accompanied by a list of the ten schools and the incidents of Jew hatred committed at each.

“For nearly two decades, the campus group Students for Justice in Palestine has promoted Hamas propaganda and the genocidal BDS movement in order to establish a beachhead of support for anti-Israel terrorists on American campuses,” said David Horowitz, founder of the Freedom Center. “The growth of the BDS movement has caused a dramatic rise in anti-Semitic incidents and the harassment of Jewish students, which administrators have done little to check.”

Visit StopUniversitySupportforTerrorists.org for more information on SJP’s links to Hamas and to read “An Epidemic of Jew Hatred on Campus: the Top Ten Neo-Nazi Incidents.” Images of the newspapers and poster that were distributed on the campuses may be viewed below. 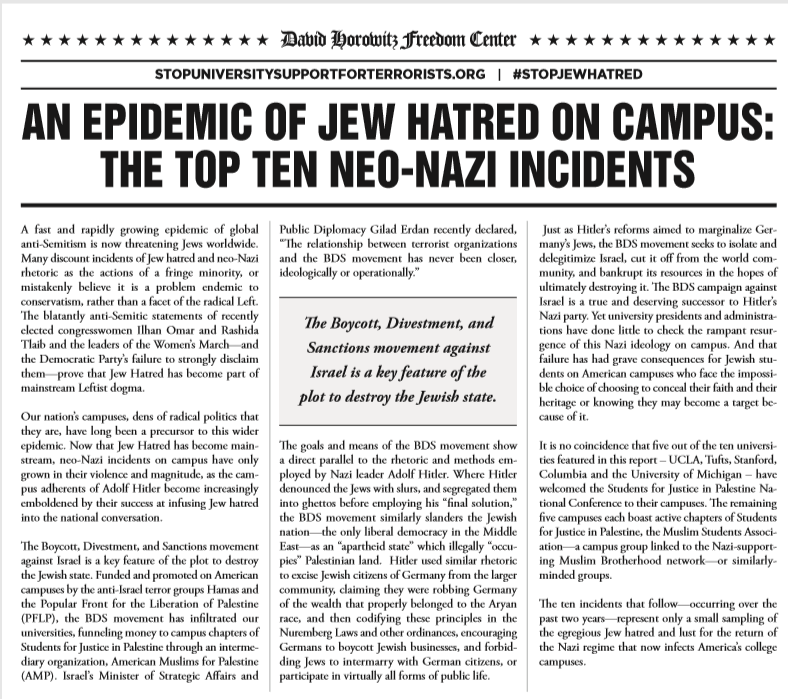