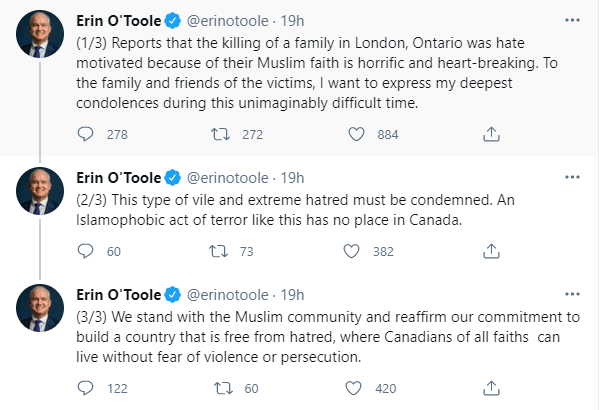 Author’s note: Four members of a London, Ontario Muslim family were run over and killed by a pickup truck last Sunday evening, while out on a leisurely walk. The youngest, a 9-year-old boy, suffered serious but non-life-threatening injuries. Police Chief Steve Williams concluded “We believe the victims were targeted because of their Islamic faith,” sparking national fury over a hate-driven act that left a nation stunned and empathetic.

The fact that five members of a family, comprising three generations, could be run over in this horrific manner because of their faith strikes at the core of civilization, but let’s be clear: Western civilization — where all human life is valued.

What is troubling about the reaction to this case is the speedy politicization of it, revealing just how low politicians are willing to stoop to exploit a profound tragedy for their own agendas. Indeed, Prime Minster Justin Trudeau quickly vowed to hunt down what he deemed to be “far right” groups — a “project” that he started a long time ago. What is highly disturbing is that Trudeau has absolutely zero evidence regarding the political leanings of 20-year-old Nathaniel Veltman — who has been charged with four counts of murder and one of attempted murder.

Reuters reported that Veltman isn’t known to belong to any hate group. The local mayor, meanwhile, called the deaths “mass murder, perpetrated against Muslims,” casting Canada as a country where Muslims are in danger everywhere.

This tragedy highlighted a troubling quality about some members of Canada’s leadership — who didn’t hesitate to manipulate the tragedy, thus harnessing a climate of mob rule and bypassing due process. From front-line police “commentary” right up to the Prime Minister — who is using this tragedy to continue hunting down “far right” groups — a pattern is now set in motion, and it will be surely exploited further by special interest lobbies comprising the red-green axis.

Below is my article on this case recently published at Jihad Watch:

A man accused of killing four members of a Canadian Muslim family by running them over in his pickup truck, targeted them in an attack motivated by hate, police said on Monday.

Police in London, Ontario, citing witnesses, said that 20-year-old Nathaniel Veltman, jumped the curb in his vehicle on Sunday, struck five members of the family, ranging in age from 9 to 74, and then drove off at high speed.

Canadian Prime Minister Justin Trudeau said: “This was a terrorist attack, motivated by hatred, in the heart of one of our communities.”

Jihad Watch initially had no intention of covering this story, as the site covers jihad activity, and while this story is one of human tragedy and horror, it is not one of jihad, Islamic supremacism, or Islamization. Or so we initially thought. But given the political agenda that is being pushed using this horrific incident, it had to be addressed.

Canada mourns. This is a case that bypasses politics. Or it should be. A family of three generations was run over and killed while on a leisurely walk; it could have been any of our families, and any humane person should be horrified, regardless of religion. But now, there is tragedy on top of tragedy. The second tragedy is that certain politicians have undermined the human component of this story in order to use it to play a dangerous political game.

“This was an act of mass murder, perpetrated against Muslims,” said Ed Holder, the Conservative mayor of London, Ontario, echoing many others. An observer from a foreign country could reasonably conclude that in Canada, Muslims constantly live in danger of “mass murder.”

Even though police indicated that this was a hate crime, police are not mandated to be judge and jury. Nathaniel Veltman will face the courts. Meanwhile, police often prematurely attribute jihad attacks in Europe and North America to “mental illness.” What gives police the right to conclude intent in any case before they could possibly have had the opportunity to gather and examine all the relevant evidence?

Mayor Holder has in effect turned Nathaniel Veltman’s act into a public indictment with severe implications prior to any due process. In doing so, he himself is guilty of acting from a mentality of mob rule. His panicked language is unfitting for a leader worthy of respect, although such leaders are hard to find these days.

Canada is turning into a country where the rule of law is trampled. This is fueled by the irresponsible political commentary of politicians who are agenda-driven or frightened, and an activist media.

Sunday’s attack came amid rising concerns about Islamophobic attacks in provinces across Canada and widespread calls for authorities to tackle racism, hate-motivated violence, and the prevalence of far-right groups.

We’ll continue to fight hate online and offline … (including) taking more action to dismantle far-right hate groups, like we did with the Proud Boys by adding them to Canada’s terror listing.

Yet there is no indication that Nathaniel Veltman was part of any group, or any published evidence of his political persuasion.

Trudeau’s statements, like Holder’s, came before any presentation of evidence in court. (The leader of the Proud Boys, by the way, is a traditionalist Hispanic man, yet the group is often dubbed “white supremacist” for its love of America.)

This is an underhanded attempt to advance the current censorship Bill C-10 that has caused an outcry in Canada.

It is clear that when all is said and done, Conservative politicians and anyone right of center, especially groups that stand against jihad violence and Sharia oppression of women, will be unjustly smeared with responsibility for this attack, no matter what they say or how much they might grieve over this incident. In Canada as in the U.S., there is a concerted attack on conservatism, the Western tradition, the freedom of speech, and even the idea of equality of rights for all, as manifested in societies based on the Judeo-Christian tradition, which is now in retreat everywhere.

Canada and all Western countries need to tackle all forms of genuine bigotry in an appropriate fashion and on a case-by-case basis. That includes the hateful pro-Palestinian rallies that have incited violence against Jews and jihad attacks on innocent people. In the midst of strict lockdowns for everyone else, a scared, politically correct Conservative government in Ontario has turned a blind eye to these massive, inciteful protests. In its silence, Ontario has sent the message that it is acceptable to be hateful toward Jews and the State of Israel.

Putting agenda and politics aside, the leader of the opposition, Erin O’Toole, tweeted out a message that showed some decorum:

We live in a society where people have differences of opinion. That should go without saying, but the voices screaming “diversity” are the loudest to condemn diversity of opinion and thought. Indeed, the word “Islamophobia” has disquieting implications in Canada, where the Liberal government has pushed the agenda of anti-Islamophobia Motion M-103, which would make the Organization of Islamic Cooperation proud. O’Toole plays into the hands of the Left by using this propaganda term; however, his reference to people of “all faiths” being able to live “without fear of violence or persecution” is good, at least in contrast to Trudeau’s one-sided statement.

Expect more dangerous Leftist political agitation to be based upon this tragic incident. It is terrible that this tragedy would be so callously and recklessly exploited for political gain.

Christine Douglass-Williams is Associate Editor of Frontpage, regular writer for Jihad Watch, a nine-time award-winning journalist, past Canadian government appointee; author of "The Challenge of Modernizing Islam" and "Fired by the Canadian Government for Critizing Islam".