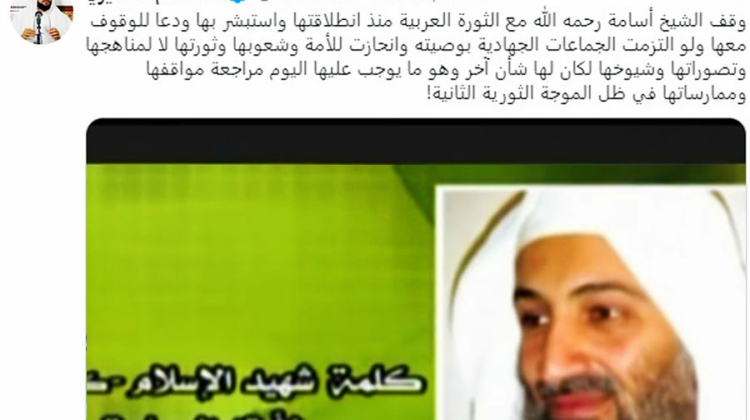 Nidal Sakr knows how to get away with murder, literally. In March 2014, he was sentenced to death, in Egypt, for the murder of an Egyptian police officer. That was just days after he was detained in the US by Homeland Security. Since then, he has remained in the US, setting up shop in Miami, Florida and Southern California. While here, he has threatened President Trump’s life, a jailable offense. And though he has been questioned by the FBI, he has gotten away with that too. What will it take for Sakr to see justice? Maybe a recent post of a bin Laden video and new anti-Trump rhetoric will expedite the process.

On the final day of 2018, Nidal Mohamed Sakr sent a message to the world by retweeting a video of a posthumous speech made by Osama bin Laden, in praise of the Arab Spring that had begun prior to his May 2011 death. The post reverently refers to bin Laden as “Sheikh Osama.” In the video, which was originally released by al-Qaeda, bin Laden mentions revolutions taking place in Tunisia and Egypt and calls for more. And though he did not live to see the murder of Libyan leader Muammar Gaddafi, who died shortly after he did, in his speech bin Laden makes the following ominous prediction: “Death came to the rulers and fear came to the Jews, who realized their time has come.”

Sakr took the post from the Twitter page of Hakem al-Mutairi (@DrHAKEM), the Secretary General of the Ummah Party (Hizb al-Umma) in Kuwait and a known financier of al-Qaeda-linked groups in Syria. In June 2017, al-Mutairi was named a “designated terrorist” by Saudi Arabia, UAE, Egypt and Bahrain. Another video found on al-Mutairi’s Twitter page is a brutal compilation of IED attacks against US troops in Afghanistan. 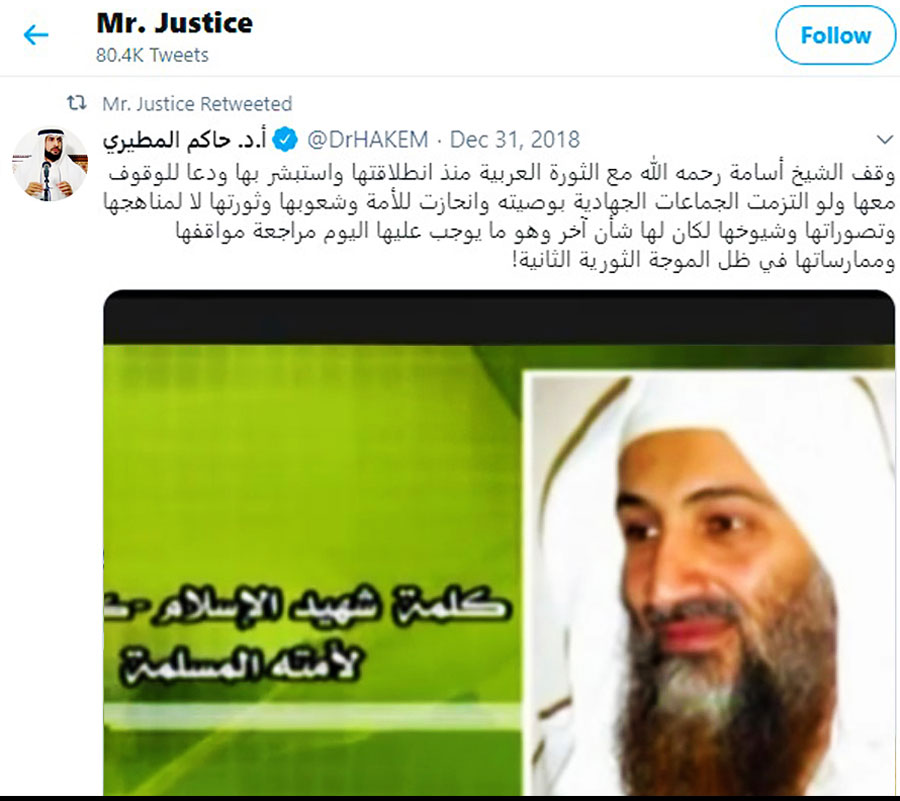 The bin Laden speech had meaning for Sakr, as Sakr participated in the effort to remove then-Egyptian President Hosni Mubarak from power. Sakr organized rallies for and was an advisor to the Muslim Brotherhood in Cairo. However, posting and glorifying a speech made by the man responsible for the worst terrorist attack on US soil could have consequences, especially given the fact that Sakr already had a relationship with bin Laden. According to Sakr, on a video of a speech he gave in Egypt, “Osama bin Laden, himself, was a student of Abdullah Azzam at King Abdul Aziz University. I know him personally. I know his brothers. I know his family.”

Like bin Laden, Sakr was a student of Azzam, the Islamic scholar and theologian who would become the co-founder of al-Qaeda. It was Azzam who recruited the young Sakr into a terrorist cell operating out of Jordan and fighting against Israel.

And like bin Laden, Sakr had his own fatal plan for the Jews. In April 2018, Sakr tweeted the following: “So called ‘israeli CANCER’ MUST BE OBLITERATED AND IT WILL BE. LONG LIVE ALL PALESTINE FROM RIVER TO SEA. INSHAALLAH COMING HOME SOON TO OUR BELOVED HOMELAND.” In August 2016, he wrote, “MAKE NO MISTAKE!! I’m Muslim Palestinian American who’ll never rest till ‘Israel’ is off the map.” And in July 2017, he called for an end to the Jews, themselves, tweeting, “We will never eliminate the Jews in the name of the Arabs; we will not take them down except in the name of Islam.”

Apart from Jews, Sakr’s main target is the President of the United States Donald Trump. Indeed, Sakr has called for Trump’s death, which is a federal crime. On October 30, 2017, Sakr tweeted, “EXECUTE SOB TRAITOR Donald Trump.” The same day, he tweeted, “Donald Trump, You Are TOAST… I GUARANTEE IT.” In September, Sakr wrote on Facebook: “FACTS ARE FACTS. Patriotic Americans Will Keep After SOB Donald Trump Until We Nail His ass. YOU WATCH!!” And in February, he warned Trump, “U come to ISLAM Or ISLAM WILL COME TO YOU.”

Throughout 2018 and 2019, Sakr has kept up the inflammatory rhetoric and vile profanities against President Trump, whom Sakr referred to, this year, as “War Criminal,” “POS SOB MF,” and “American Sisi.” The Sisi that Sakr is referring to, of course, is the current President of Egypt Abdel Fattah el-Sisi, whom Sakr has depicted, in the past, with a noose around his neck.

The language that Sakr uses is that of a mentally disturbed and obsessed individual – the exact combination needed for someone to take matters into his own hands and commit an extreme act of violence. We ignore these warning signs at our own peril.

Sakr was sentenced to death in Egypt for the murder of a policeman. We have an extradition treaty with Egypt, and murder is no doubt a serious crime. Why hasn’t he been extradited? Sakr has called for the execution of President Trump and continues to use alarming language to attack the President on social media. Why has he not been taken into custody? And on top of all this, Sakr has been active in a terrorist cell and was a close acquaintance of Osama bin Laden, and he still clings to the al-Qaeda leader and lauds his views.

Nidal Sakr, a Muslim Brotherhood operative, poses a grave threat to America and our national security. He makes no secret of his toxic ideology and aggressive intentions. He is a ticking time bomb and, if his past is any indication, it is only a question of time before he acts according to his violent rhetoric and festering hatred. The President and the American public must be protected from this cop killer and jihadi. The danger is increasing with every passing day.

Either in the US or overseas, Sakr must be made to face legal justice.

Joe Kaufman is a Shillman Fellow at the David Horowitz Freedom Center, and the Chairman of the Joe Kaufman Security Initiative. He was a 2014, 2016, and 2018 Republican nominee for the U.S. House of Representatives (Florida-CD23).