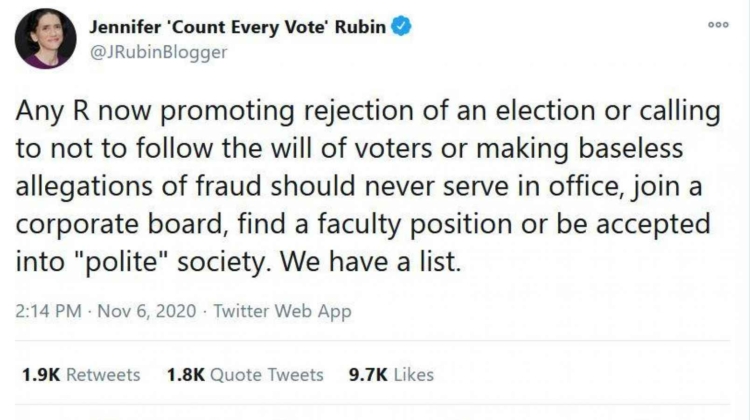 Even as last week’s election results are being contested and the Democrats’ massive voter fraud is being exposed, the supporters of empty-suit candidate Joe Biden are already claiming victory and chafing at the bit to implement their radical agenda. And in contrast to his hypocritical call to “put away the harsh rhetoric” and unify Americans after the purported divisiveness of Donald Trump, Biden’s supporters have already begun threatening their political opponents with vicious retribution for supporting their #MAGA nemesis.

True to their totalitarian nature, newly-reelected New York Rep. Alexandria Ocasio-Cortez and other high-profile Democrats tweeted Friday that Trump supporters essentially should be blacklisted for their role in advancing his unacceptable agenda to make America great again. “Is anyone archiving these Trump sycophants for when they try to downplay or deny their complicity in the future?” the socialist Ocasio-Cortez tweeted. “I foresee decent probability of many deleted Tweets, writings, photos in the future.”

“Lol at the ‘party of personal responsibility’ being upset at the idea of being responsible for their behavior over last four years,” she added later. It takes enormous chutzpah to accuse Republicans of misbehavior in our current, thuggish “cancel culture” marked by rampant leftist violence.

“Complicity” is a loaded word, which she no doubt chose intentionally. It means participation in criminal or wrongful activity. The implication, of course, is that both President Trump and his supporters are not simply political opponents but are legally guilty of wrongdoing and must be punished.

In a democratic political system, one party “punishes” the other by beating it in elections. Losing the election – being denied the opportunity to implement your agenda – is the punishment. The opposing parties then move forward together in an often uneasy or even contentious coexistence until the next election. But totalitarians by definition reject coexistence; after seizing power they punish their opponents literally and brutally, out of pure vindictiveness and with the intent to eradicate any opposition once and for all.

In a related tweet on Friday, Never-Trumper columnist Jennifer Rubin, the Washington Post’s token “conservative” (until she officially dropped the label from her bio two months ago), embraced her inner totalitarian: “Any [Republican] now promoting rejection of an election or calling to not to follow the will of voters or making baseless allegations of fraud should never serve in office, join a corporate board, find a faculty position or be accepted into ‘polite’ society,” Rubin stated with eyebrow-raising directness. “We have a list.”

We have a list. The left is gleefully boasting about putting together an enemies list to ostracize – no, to destroy – Trump supporters. This echoes unhinged Rep. Maxine Waters’ reprehensible call two years ago to her supporters to publicly confront and harass Trump cabinet members: “Let’s make sure we show up wherever we have to show up. And if you see anybody from that Cabinet in a restaurant, in a department store, at a gasoline station, you get out and you create a crowd. And you push back on them. And you tell them they’re not welcome anymore, anywhere.”

Not welcome anymore, anywhere. This kind of ugliness goes far beyond agreeing to disagree. It is a rabble-rousing call to wage mob intimidation against fellow Americans, ostracize them from what Rubin calls “polite” society, and ruin their livelihoods. This is a totalitarian threat.

And who has this enemies list? Other social media users announced on Friday the launch of an ominous new initiative: the Trump Accountability Project, the purpose of which, as Emily Abrams, former campaign staffer for failed presidential candidate Pete Buttigieg, tweeted, is “to make sure anyone who took a paycheck to help Trump undermine America is held responsible for what they did.”

“We must never forget those who furthered the Trump agenda,” the Trump Accountability Project website states. “We should welcome in our fellow Americans with whom we differ politically. But those who took a paycheck from the Trump Administration should not profit from their efforts to tear our democracy apart.”

Don’t assume that the Party of Tolerance and Inclusiveness will “welcome” Trump supporters under a Joe Biden-Kamala Harris regime, or that their retribution will be limited to paid employees of the Trump administration. As the Massachusetts Daily noted, in addition to campaign workers, political appointees, and Trump donors, the Trump Accountability Project site originally added to its hit list “Individuals and Organizations that publicly endorsed either of Trump’s campaigns for President, in 2016 or 2020. – This means you.” So paid or not, anyone who publicly declared they were voting for Trump is a target. [That part of the statement disappeared from the website by Saturday morning, no doubt because it exposed just how broad and “inclusive” their vengeful scope really will be.]

We have already witnessed innumerable violent examples in the recent past, caught on video, of just how “welcoming” the left is to Trump supporters even while Trump is still in office. Are we now expected to believe that, if Biden is confirmed as President, the Democrats will treat Trump voters with any less cruelty, as long as the latter didn’t receive an actual paycheck bearing Trump’s signature?

The website continues: “The world should never forget those who, when faced with a decision, chose to put their money, their time, and their reputations behind separating children from their families, encouraging racism and anti-Semitism, and negligently causing the unnecessary loss of life and economic devastation from our country’s failed response to the COVID-19 pandemic.”

Every one of these points is either misleading, an outright lie, or pure Democrat projection. Temporary separation of illegal alien families at the border is for the protection of the children and a check against human trafficking — not, as the left insists, just capricious cruelty (nor did it originate with Trump; Barack Obama, with Biden as Vice President, separated families as well). It is the Democrats who have divided us with their inherently racist identity politics. It is the Democrats who openly express anti-Semitism (Ilhan Omar, anyone? Rashida Tlaib? Linda Sarsour? Black Lives Matter?), not Trump, who is widely-considered the most pro-Jewish and pro-Israel American president ever. It was not Trump but Democrat state leaders like the incompetent New York Gov. Andrew Cuomo and tyrannical Michigan Gov. Gretchen Whitmer who exacerbated the “unnecessary loss of life and economic devastation” from the coronavirus.

Right-wing social media reaction to these threatening tweets was swift and defiant. Conservative actor and Twitter gadfly James Woods tweeted to AOC, “Are you literally making lists? I understand you’re an ignorant nitwit who’s never had a passing acquaintance with a history book, but political lists are EXACTLY what Communists do: Lenin, Stalin, Pol Pot, Castro. So put me at the top of your list, you moron. I’d be honored.”

Republican Senator Marsha Blackburn too proudly offered her name to the list: “If by undermining America you mean stopping Democrat socialists, not defunding police and blocking the Green New Deal, add me to your list,” she wrote, adding the hashtag #MAGA.

Today’s Democrat Party – proudly far-left, anti-Constitution, anti-capitalism, and anti-American – has demonstrated through its ruthless “cancel culture,” its violent assaults and mob harassment against conservatives, and its lawless urban rampages which the media dishonestly dismiss as “mostly peaceful protests,” that it is totalitarian to the core. Can anyone seriously doubt that, given enough power, and aided and abetted by today’s media propagandists, the left would not merely eject conservatives from their “polite” society, but would establish re-education camps and eventually even gulags for those who hold “incorrect” opinions? It has happened everywhere that totalitarianism reigns. All freedom-loving Americans must defy and vigorously denounce the left’s call to exact revenge upon their political opponents.