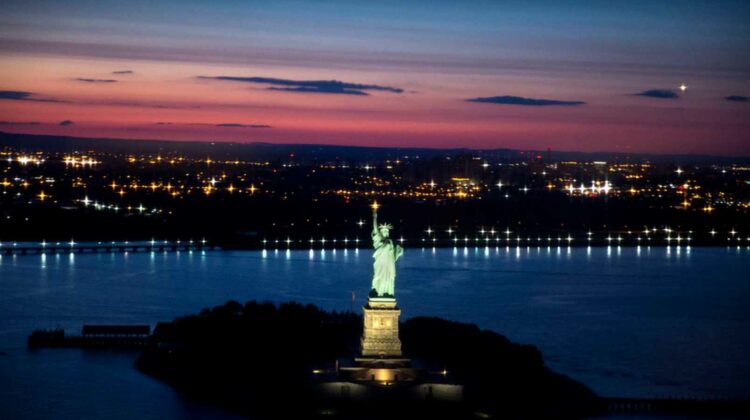 Under the pretext of public health, the soul of what is known as the Free West has left most Western countries. Looking at the government overreach and abuses of power in virtually every other Western nation, one can only conclude that America truly is the last free man standing.

Here is a rundown of the suppression of liberty in major Western countries.

Let’s start with our neighbor to the north.

Canada is one of the least free countries in the Western world. In some ways it is the least free. In every area of life, including freedom of speech, Canada severely restricts its citizens’ rights. Canada is one of the only countries in the world that bans the unvaccinated from all public transportation — airplanes, trains and buses. And no Canadian home can entertain more than three non-household visitors — a ban that prevented families and friends from getting together for Christmas.

Canada is a moral embarrassment. But apparently most Canadians are perfectly content to live in a country moving toward dictatorship.

They should replace the maple leaf on the Canadian flag with a sheep.

In the summer of 2021, most European countries introduced the so-called health pass or “European COVID-19 Pass.” This digital pass, in the form of a QR code, is a prerequisite to access cafes, bars, restaurants, theaters and even long-distance transport. Only the naive can now deny that the real goal of the EU has long been a digital identity system for all European citizens.

The Netherlands is among the least free countries in the West.

Stay at home as much as possible; receive no more than two visitors per day; be with no more than one other person outdoors; and work from home.

In addition, restaurants, cafes and bars and nonessential shops are all closed.

Nor do the Dutch have the right to protest these draconian restrictions. Two days ago, an anti-lockdown protest was banned by the leftist mayor of Amsterdam, Femke Halsema, because people would “not be adhering to social distancing rules.” Thousands of people nevertheless showed up. They were met with drones, water cannons and huge numbers of police. Footage capturing a police dog biting down on a peaceful protester’s arm has gone viral.

Starting next week, working from home will become compulsory for those who can.

French Prime Minister Jean Castex said, “Even if we do not yet see hospitals as overloaded by omicron, the contagiousness of the variant and the speed at which it is spreading require us to go further.”

And the country has had a “health pass” since last summer, which only allows the vaccinated, those who have a negative COVID-19 test result from within 24 hours, or who had COVID-19 to enter cafes, restaurants, museums, cinemas and other public places. So, too, wearing a mask is compulsory throughout the country for everyone aged 11 and over in enclosed spaces and on public transport, on pain of a fine. Accordingly, consumption of food and drink is banned on public transport — including long-distance trains.

In schools, wearing a mask is compulsory from the age of 6, including in outdoor areas of the school.

Austria competes with the Netherlands for the title of Western Europe’s least free country.

From Nov. 22 to Dec. 12 no one was allowed to leave their home except for specific reasons such as buying groceries, going to the doctor or exercising. The lockdown has continued for the more than 30% of Austrians who remain unvaccinated.

In other words, nearly a third of all Austrians have not been allowed to leave their homes since Nov. 22 and will not be allowed to do so for the foreseeable future.

It is about to get much worse. Austria is about to become the first country in the world that will make the COVID-19 vaccine compulsory. It will be illegal to be unvaccinated. Beginning Feb. 1, unvaccinated Austrians will be fined 200 euros every month, and the fine will be increased every time they are caught in any activity outside of their house. Germany has already stated it wants to follow suit.

Australia placed most of its citizens under house arrest for much of 2021. Sydney, Australia’s most populous city, was locked down for 106 days, ending only on Nov. 15. And Melbourne, the country’s second largest city, described by the Voice of America on Oct. 21 as “officially the world’s most locked down city,” was locked down 260 days. Residents were prohibited from traveling more than five kilometers from their homes, visiting family or friends, entering supermarkets except for pickup, and attending funerals. Schools were, and remain, still closed, and international travel was, and remains, prohibited. Needless to say, all shops, bars, and restaurants were closed. Essentially, people were prohibited from leaving their homes for a third of a year.

The lockdowns in New Zealand rendered that formerly free country essentially a totalitarian state in 2021. Befitting a totalitarian state, New Zealand’s prime minister, Jacinda Ardern, actually said at one point regarding COVID-19 information, “Unless you hear it from the government, it is not true.” The woman, a bona fide fanatic, locked down her entire country because one person had the delta variant. Even pro-lockdown CNN seemed to find this a bit over-the-top. It headlined on Aug. 17: “New Zealand announces it’s locking down the entire country … over one Covid case”.

At the beginning of December, Germany announced a lockdown on the unvaccinated. They were banned from restaurants and bars, movie theaters, gyms, nonessential shops, and Christmas markets. About a quarter of all Germans are unvaccinated.

Scotland has banned spectators, even if vaccinated, from attending sporting events. Masks must be worn indoors at public venues such as nightclubs, and one must show a health pass to enter nightclubs and other venues.

Wales went even further, allowing a maximum of six people to meet in pubs, cinemas and restaurants. Nightclubs were simply closed as of Dec. 27. Mandatory six-feet social distancing came into effect in offices from the same date. People must work from home unless it is impossible to do so.

While England does not yet have the same lockdown rules as Wales and Scotland, throughout the U.K. one must show a health pass certifying vaccination — or had a negative COVID-19 test within the past 72 hours or had COVID-19 under six months earlier — in order to enter most public locations.

And then there is the United States of America. With states like Florida and most other Republican-governed states, we have the freest places in the Western world. Going from Canada or Western Europe to Florida is like going from Romania or Poland to Western Europe during the Cold War. Indeed, going from most Democrat-run cities to most Republican-run cities is also like passing through the Iron Curtain.

Thanks to its conservative half and thanks to the Founders’ genius of defanging the national government by giving states great power, America remains the beacon of liberty it was when Lincoln said, “America is the last best hope of Earth” and when France gave us the Statue of Liberty. If it were up to the Left, America would be as unfree as Canada or Austria. That’s why fighting the Left is the most important thing any American who cherishes liberty can do.

Dennis Prager is a nationally syndicated radio talk-show host and columnist. His latest book, published by Regnery in May 2019, is “The Rational Bible,” a commentary on the book of Genesis. His film, “No Safe Spaces,” was released to home entertainment nationwide on September 15, 2020. He is the founder of Prager University and may be contacted at dennisprager.com.