In a stealth campaign to circumvent campus censors and reach students directly, the David Horowitz Freedom Center distributed 2,500 mock newspapers on the campuses of Georgetown University and Duke University. The papers contained the Freedom Center’s new report exposing both campuses as belonging to the “Top Ten Fascist Universities in America.” Georgetown was named #1 on the list and Duke was named #9. 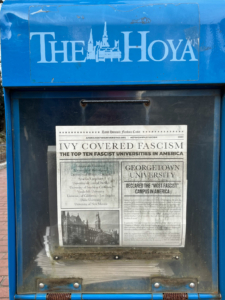 Titled “Ivy-Covered Fascism,” the report documents the increasingly totalitarian environment on America’s college campuses where academic freedom is in peril and free speech is critically endangered.

The newspapers were distributed across the universities’ Washington, D.C. and Durham campuses, with copies made available in classroom buildings, dining facilities, student centers, and in distribution boxes for The Hoya and The Chronicle, the respective student newspapers for Georgetown and Duke.

“Our nation’s colleges and universities were constructed to be bastions of free and open debate by scholars engaged in the search for truth,” states the report. “Instead, they have become ideological prisons where the merest stray remark can be cause for expulsion and colleagues and classmates function as Stasi informers to hold the party line.”

The Duke Chronicle reported on the sudden appearance of the newspapers on campus. “The leaflets, which were found inside and outside of dorms and classroom buildings, accused Duke of ‘[persecuting] faculty and students who refuse to submit to the administration’s radical outlook,'” described the Chronicle. “It also called on Duke to rewrite campus policies that ‘obstruct constitutional speech’ and ‘provide redress for all students and faculty who have been illegally silenced or disciplined for their expression.'” 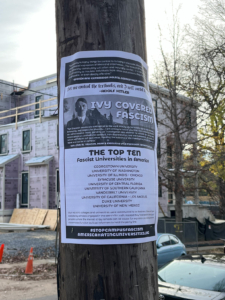 The coverage by The Chronicle also delved into the reasons why Duke was named to the “most fascist” list. The article recounted the case of former Duke professor Evan Charney–highlighted in the Freedom Center’s report–who was summarily fired after a two-decade teaching career because some students had complained about his “teaching style.” It also described the Duke Student Government President’s rare and controversial veto of a motion to grant official recognition to Students Supporting Israel, a pro-Israel student organization.

For its part, the Duke administration refused to comment on the newspapers. “We will not dignify the contents of the leaflets with a response or comment,” Chris Simmons, interim vice president for public affairs and government relations, responded to The Chronicle‘s request for comment.

Despite the administration’s initial refusal to address the Freedom Center’s concerns, the newspaper campaign achieved its desired effect of highlighting the increasing ideological censorship and repression of speech at Duke.

“We call on the universities catalogued in this report to immediately rewrite all campus policies and procedures that obstruct constitutional speech and provide redress for all students and faculty who have been illegally silenced or disciplined for their expression,” said Freedom Center founder David Horowitz. “If they should fail to do so, we urge Congress to withhold all federal funding until they are willing to bring their policies and actions in line with the Constitution.”

Read the full report on the Top Ten Fascist Universities in America at AmericaHatingUniversities.org and view additional images from our newspaper campaign below.