[Order David Horowitz’s ‘Mortality and Faith: Reflections on a Journey Through Time’: HERE.]

Next year when I teach my course on existentialism, I shall be introducing a new text: Mortality and Faith: Reflections on a Journey Through Time by social and existentialist philosopher David Horowitz. Most of us know David as the formidable, firebrand political writer of such bestsellers as Big Agenda, Dark Agenda, and The Enemy Within.

It is rare, though, to find a memoirist who in writing in that register writes, too, as a deep and reflective moral and existential philosopher—more lucid and inspiring than one is likely to find among the academic professoriates.

I’ve been an academic philosopher now for well over twenty-five years. I am, by nature, not a sentimental person. I am highly cerebral, and while I would like to think my heart is warm and tender to towards those whom I love and to my friends, my mind, I like to think, is generally governed by the cold, dissecting hand of reason. It’s not often that a memoir that is also a work in philosophy brings more than a tear or two to my eyes. But such was my experience in reading Horowitz’s book. 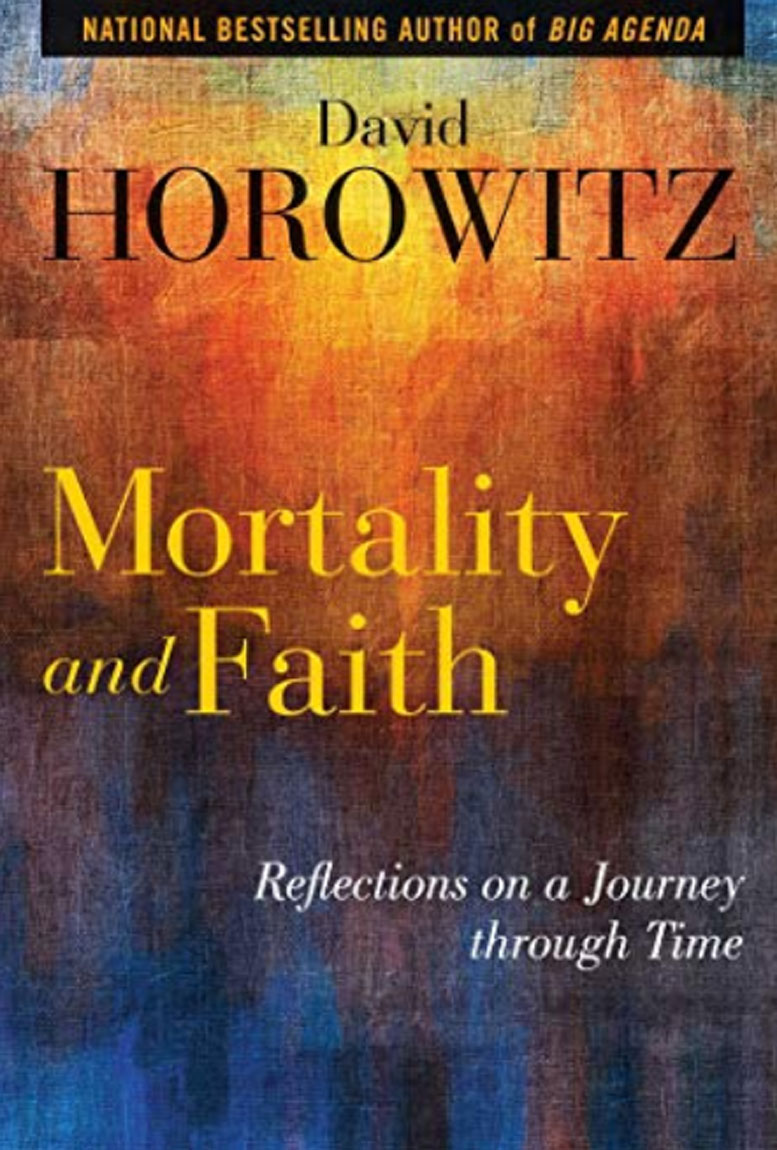 Perhaps it is because this man whose lived experience is deeply philosophical writes in old-fashioned, beautiful, elegiac prose whose unsentimental style elicits tears because the pain and suffering that is much of Horowitz’s life is ensconced and parsed between meditative reflections of those who themselves lived hard-thinking, yet heroic and beautiful, lives: Blaise Pascal, Marcus Aurelius, Fyodor Dostoevsky and Amadeus Mozart. Perhaps it is because this book, written as a philosophical memoir, is the most cinematic piece of philosophical writing I have ever read: it is a book made to be filmed.

As Horowitz writes of his painful bouts first with prostate cancer, then with its devastating metastasis into his bladder and colon, his hip replacement, his paralysis, his deep and abiding love, passion  and devotion for his wife April, and her equally doting and fierce loyalty to him, his depiction of surrendering to the ways his dogs and horses have rendered a dosage of humility to his life—we witness all the material ways he’s enacted the wisdom of the sages he’s devoted endless pages to pondering. Academic philosophers like to meditate on the meanings of the wisdom others have imparted to us. Horowitz does this when he is offering deep insights into the words of Pascal and Aurelius and Dostoevsky.

What makes his book a great work in philosophy is that, without deliberate intention, he organically reveals, in the most vulnerable of ways, how his life is iterations and lived manifestations of those thinkers’ words. I imagine when I teach this book—no, that’s the wrong word—when my students and I explore this book we can point to Horowitz’s life as an ostensive definition of what it means to live the life of a writer in the midst of an absurd universe, a universe that neither favors us, nor disfavors us—it is abjectly indifferent to us. Horowitz echoes this sentiment when he writes that we alone among creatures know our fate, and learn sooner or later that the world has no interest in it.

Horowitz writes to mark the order he finds in the world. He is stoically optimistic. My sense, too, is that he is a normative, stylized thinker in one respect: he writes to create an order that ought to be in places that are just not there. Horowitz might disagree. He writes: “Here is why you cannot change the world: Because all six billion of us—create it. We do so individually and relentlessly and in every generation. We shape it as monarchs in our homes and beyond, when we cannot even master ourselves.” And further: “When I ask myself why I rise in the morning to write this page and spend the time that time will soon erase, my answer is this: On the days when the words fall into place and an order appears, I am at peace.

Horowitz believes that we exist in a series of stories that we tell ourselves and that these stories do not have an ending. He notes, “Without our stories, our lives would be chaos and our existence unbearable.”

In this sense he is in the company of the great philosopher and theologian Abraham Heschel. For, indeed, if we exist in a series of stories that we tell ourselves that have no ending, we exist as endless disclosures of possibilities as well as exposition of actualities of being human. We exist in a state of becoming and transcendence. The beauty of Mortality and Faith is that it is a work in personal transcendence in a man who remains rooted throughout his entire journey in his body, his pain, his indescribable suffering and loss. Nowhere does Horowitz in his journey use the word transcendence.  Yet his life is a paean hymn to the transcendence of bitterness in the face of loss and tragedy, and the construction of meaning and purpose in a world that I think he believes has no built-in meaning for humans short of the ones they construct for themselves.

There are moments when Horowitz is plagued by cosmic emptiness, and again by a sense that the world is irrevocably broken “into billions of fragments, bits of human unhappiness and earthly frustration. And no one can fix it.”

If this sounds pessimistic and even nihilistic it is not. Horowitz the man and his life are the antidote to his observations. He affirms life with the enduring passionate love he maintains for his wife April, in his devotion to his writing, which is in itself an antidote to existentialist paralysis.

Commenting on his wife’s refusal to give heed to his views on the cosmic emptiness toward which we are all headed, Horowitz writes that he has

no intention of letting these views of darkness influence my actions. If one were indeed to act on the opinion that we are nothing and nothing matters, one would end up a nihilist or sociopath. But I don’t live by what I think the future may hold. My stoicism tells me to cherish what I have and hope to make the worlds within my reach a little better. I accept the contradiction—that my head should tell me one thing and my heart another—and listen to my heart.

There is a consistency to Horowitz’s alleged contradiction. That contradiction may be one bound up in the nature of the universe to which he, indeed all of us, may have to reconcile ourselves. What is the contradiction? Horowitz eloquently sums it up when he writes that the future is a work of prejudice and malice inextricably bound with generosity and hope. It is, he says, carried out now and forever under the terrible anarchy of freedom that God has imposed on his children and will not take back. Although Horowitz writes as an agnostic, the use of God here is a heuristic device deployed for us to make sense of the contradiction. Ensconced in the prejudice and malice that characterize the world, we chose to suffuse our world with generosity and hope.

Horowitz reveals himself as a disclosure of possibilities. As we witness what could be read as a series of apocalyptic medical diagnoses, as we read of the death of his oldest child, Horowitz never superimposes an interpretation on his experience. He simply is. He exists in the moment. He survives. He takes joy in his wife, his animals, his work, in the simple things of life. He describes what some would describe as “the indignities of the externals” after one has had bladder and colonic surgery not with feigned clinical detachment, and certainly not with lugubrious sentimentality; but, rather, as if we were bedside companions witnessing all the vagaries of life with a friend as they are, and as they could not have been otherwise.

If you want an answer to the question of what is the function of the human being, there is little here that will be of profound help. However, if you hold a deep desire to understand how we live what we are, if you want to understand the problem of the human that is occasioned by our coming upon a conflict or contradiction between existence and expectation, between – as Heschel might put it – what a human being is and what is expected of him, Horowitz’s life itself will provide meaningful counsel. His is a rich life because despite his doubts, contradictions and cosmic fears, he knows the body and soul each has its own integrity. It is this life of Horowitz, one lived with integrity and without regret, that you will bear witness to in the book; and it will make you leave this book wiser and with a tenderer heart. The absence of regret should not be read as hubristic. Indeed, as Horowitz has come to realize, it is forged in the crucible of humility. In fact, he imparts a great gem of philosophical wisdom to us when he writes:

It is the certainty of death that finally makes a life acceptable. When we live as fully as we can, what room is left for regret? The poet Eliot observed that there are no lost causes because there are no won ones. Everything falls to the same imperfection. Eventually, without exception, we will follow the same arc to the earth.