Confronting the nihilistic call to rid the world of family.

Profile of a leftist white supremacist.

Why doing time shouldn’t absolve you of your fiscal responsibility.
Too many people have been let into the future.
An open letter to President Biden.
Venezuelans brought this crisis on themselves.
[Order David Horowitz’s ‘Mortality and Faith: Reflections on a Journey Through Time’: HERE.] Next year when I teach my course on existentialism, I shall
A review of the MSNBC race-monger’s anti-American screed.
The chickens of the 1960s have come home to roost.
Should we be responsible for the procreative choices that other people make?
Reducing humankind to the lowest common denominator of the least competent.
[Read Part I: HERE.] What type of ethos and mindset equipped the Founding Fathers to arrive at the correct moral and political systems that would result
Answering the critics who call our founding document “trash.”
Do human rights supersede property rights?
When the end goal is to crush the American Dream.
It’s time to fight fire with fire.
An interview with the author of a new book on the progressive racism movement. 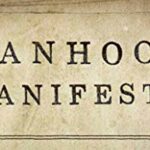 Editor’s note: Freedom Center Shillman Fellow Jason D. Hill, the author of What Do White Americans Owe Black People: Racial Justice in the Age of Post-
A few years ago, I was invited by a small liberal arts college in the Northeast to give a series of lectures on ethics and the formation of moral character to
[Order David Horowitz’s new book — I Can’t Breathe: How a Racial Hoax Is Killing America: HERE.] Consider the following facts outlined in David Horowitz
Sen. Elizabeth Warren said on Wednesday October 13, 2021, that billionaires who have enough money to shoot themselves into space, as Jeff Bezos did this summer
Family breakdown is the single greatest threat to American society. Every day, more than 4,000 children lose a parent because of our archaic and inhumane
Author’s note: In his most recent book, America’s Revolutionary Mind: A Moral History of the American Revolution and the Declaration That Defined It, C.
Freedom Center Shillman Fellow Bruce Bawer’s excellent Frontpage article “Where Are the Gays?” paints a chilling portrait of the imminent torture, execution
Jonathan W. Emord is one of the United States’ leading constitutional and administrative law attorneys. He has defeated the FDA eight times in federal court,
Next Page »