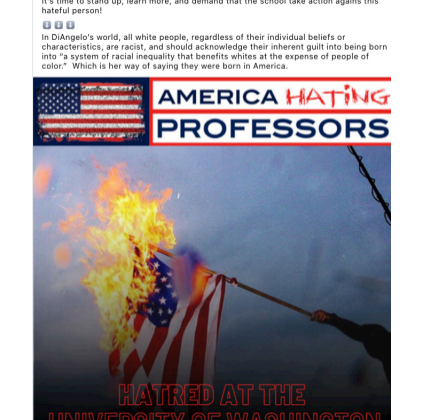 The ivory tower has long been a refuge for those who hate our country. For decades past, students have been forced to endure scholarly lectures on the evils of American hegemony, imperialist dominance, Western civilization and festering racism. But never before in our history has the very concept of our nation—founded on our inalienable rights to life, liberty and property, equality before the law, freedom of speech, press and association, and control of individual destiny—been so trampled by the institutions that exist to educate our next generation.

Spurred by this rising tide of anti-American hatred, the Freedom Center published a report and created a new website, AmericaHatingProfessors.org, exposing the Top Ten America-Hating Professors. With students and faculty evacuated from campus due to the virus, the Freedom Center conducted a targeted Facebook and Instagram campaign which displayed ads highlighting the atrocious statements and actions of these America-hating professors directly to students, faculty, staff, and alumni at four of the ten schools listed in the report.

Each one of these professors has abused his or her academic position to promote vicious and factually untrue lies about the American nation or to advocate for criminal action and/or violence against conservatives and Trump-supporters.

De Genova infamously called for “a million more Mogadishus” at the start of the Iraq war, referencing the deaths of American soldiers that resulted from a 1993 American military action in the Somali capital. He also claimed that “imperialism and white supremacy have been constitutive of U.S. nation-state formation and U.S. nationalism,” and declared his desire to see “the defeat of the U.S. war machine.”

Clover is a self-declared communist who openly promotes the murder of law enforcement officers, stating in an interview, “People think that cops need to be reformed. They need to be killed.” He also views life-and-property-destroying riots as a legitimate means of political expression and praises moments of shattered glass and fire” because they interrupt “the grim continuity of daily life.”

DiAngelo is a vitriolic race hustler who—despite being white herself—seeks to profit off of condemning all whites as guilty of racism and demonizing America as built on “white supremacy.”

Thomas prides himself on his extreme social media profile, and regularly smears mainstream conservatives as fascists, for instance describing “MAGA teens” as “modern day Hitlerjugend [Hitler Youth].” He has also advocated for criminal action against Republican elected officials, calling for his fellow leftists to interrupt Republicans at dinner and “Put your whole damn fingers in their salads” because “They don’t deserve your civility.”

Using eye-catching graphics and memes, the Freedom Center’s social media campaign was able to place this direct evidence of each professor’s anti-Americanism directly into the Facebook and Instagram feeds of students, alumni, and fellow educators from each university. Reaction was swift and condemnatory.

“I graduated from U of H but will not support an institution that employs America-hating professors,” wrote one alum from the University of Houston. “I was hoping U of H would have avoided the infiltration of these radical activists,” wrote another. “It WAS a great school and I WAS a proud graduate in 2000. Now I see they are tainted with this poison. Shame on them for allowing this evil.”

“This will, and should, blow the hell out of 50% or more of their alumnae giving!” an alum from another campus declared.

“Pathetic. No more donations to my alma mater until he is gone. Hotty Toddy!” an alum from Ole Miss commented about Professor Thomas.

During the two-and-a-half weeks of the social media campaign, the Freedom Center’s ads exposing America-hating professors reached 100,000 individuals across all 4 targeted campuses and garnered 300,000 total impressions, 11,000 clicks to view the full report on the AmericaHatingProfessors.org website, and 14,000 engagements including likes, shares, and comments. This is an incredible reach for a campaign of this size and scope and successfully exposed the anti-American tenor of these universities to large numbers of current students and alumni. The campaign was originally scheduled to run for a full month, but was forced to end prematurely when Facebook pulled all political ads in late October, a ban that continues to be enforced.

The campaign also featured two videos created by videographer Sean Fitzgerald exposing the Top Ten America-Hating Professors and bringing the campaign to a wider audience. Each of these videos garnered in excess of 20,000 views.

“The existence of these professors reflects not only on these individuals but on the academic institutions that support them,” said Freedom Center founder David Horowitz. “The presence of an America-hating front on our nation’s college campuses is an ominous development and a clear threat to America’s future.”

Images of some of the Freedom Center’s Facebook ads targeting America-hating professors may be viewed below. 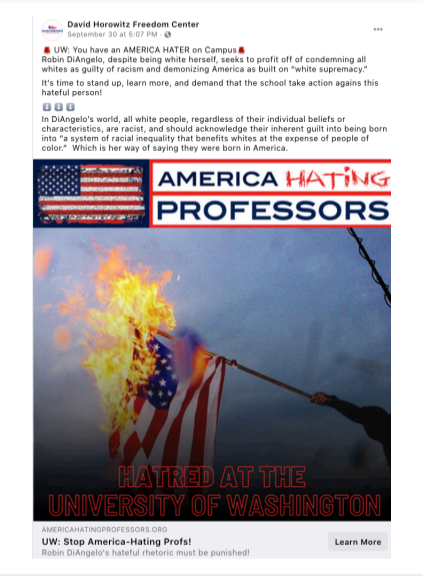 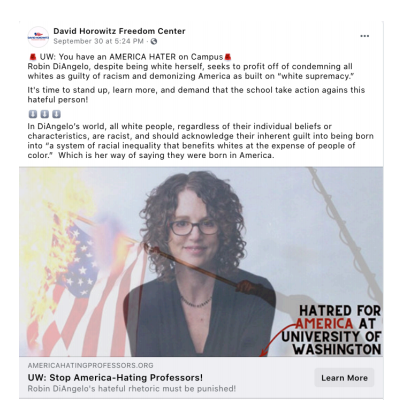 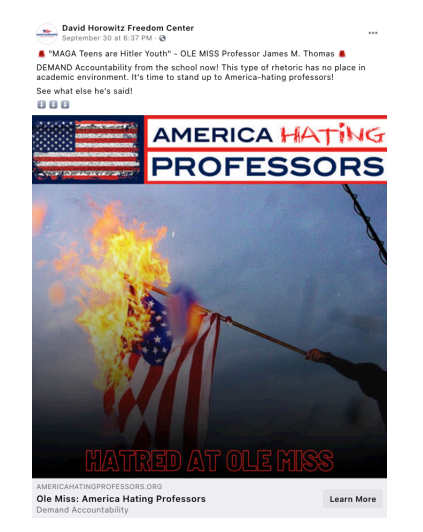 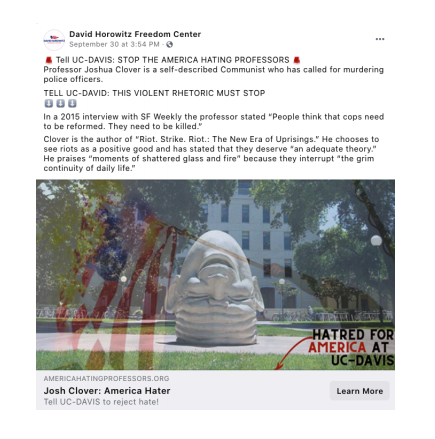