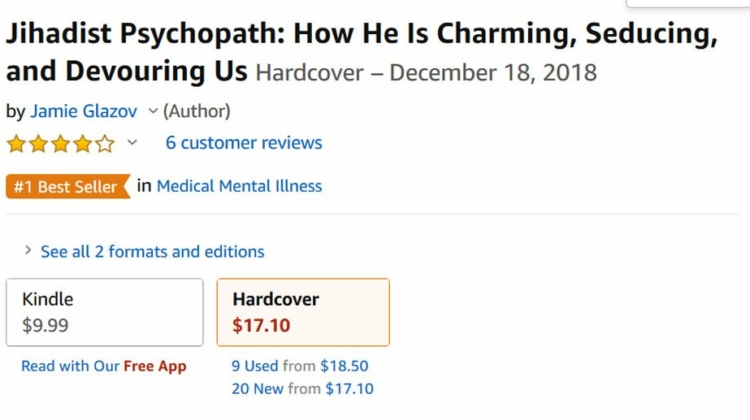 [Order Jamie Glazov’s new book: Jihadist Psychopath: How He Is Charming, Seducing, and Devouring Us.]

In his recent appearance on America’s Voice News with Jesse Kelly, Frontpage Editor Jamie Glazov discusses Why Jussie Smollett Lied – And The Left’s Victimhood Cult, unveiling how totalitarian movements portray themselves in order to gain power.

Jamie reveals how his new book, Jihadist Psychopath, illuminates how the Unholy Alliance markets in pain, suffering and death to enhance its political and cultural capital.

Meanwhile, we are excited to announce that Jamie’s new book is, at this moment, as indicated in the screen shot/graphic to the left, Amazon’s #1 Best Seller in the Medical Mental Illness category. It is also Amazon’s #1 New Release in the “Islam” category.

Perhaps it is really no surprise, therefore, why Jihadist Psychopath has also been targeted by Twitter and Pakistan for violating Islamic blasphemy laws.

Below is the new video of Jamie Glazov’s recent appearance on Governor Mike Huckabee’s TBN Show to discuss his new book:

And make sure to tune into Jamie’s recent talk at the Freedom Center’s Wednesday Morning Club about his new book, below:

Jamie was also recently on America with Eric Bolling discussing Ilhan Omar’s Jew-Hate and Jihad on the Border.

Watch a clip of the show on Twitter: Here.

The entire episode can be seen, with a subscription: HERE.